OEMs are taking concrete steps to reduce CO2 and enhance sustainability throughout the life cycle assessment (LCA). These steps are triggered by the 2015 Paris Climate Conference which set a goal of becoming CO2 neutral by 2050, the subsequent tightening of regulations by various countries and the growing global criticism of corporate social responsibility. In order to reduce CO2 emissions, European OEMs will launch a series of newly developed BEVs starting in 2019 in an effort to replace volume-selling models in the C and D segments. However, BEVs require a large amount of power in the production stage, especially in the production of battery cells. In terms of LCA, depending on the combination of energy sources, BEVs emit more CO2 than conventional cars. Companies are working with suppliers to procure renewable energy, reuse batteries as well as interior and exterior materials with an aim to realize CO2 neutral performance through BEVs.

Toyota, which has been considering LCA from an early stage, has also been focusing on BEVs and PHEVs in Europe, where renewable energy sources will increase in the future, and in China, where regulations are already in place. Meanwhile the company is building on HEVs, which are already popular in the market thanks to their low fuel consumption. Toyota is aiming to expand the use of hydrogen powertrains globally to comprehensively reduce CO2 emissions.

LCA requirements for suppliers will also be stricter. Automakers are expanding the scope of LCA throughout the supply chain and value chain, identify potential sustainability risk factors and reduce life cycle CO2. The same goes for parts procured from suppliers. Companies are also using new technologies such as blockchain to develop a thorough mechanism. In the future, business partners who meet LCA requirements will be given higher priority.

・Daimler has set a target of having all new vehicles CO2 neutral by 2039 as part of the Ambition 2039 vision announced in 2019. This comes ahead of the 2050 targets set by each country under the Paris Agreement. – In 2019, the EQC 400 4MATIC (EQC) was launched as the first BEV of the Mercedes-Benz brand. In November of the same year, the company published a report on sustainability through LCA of the EQC. – The EQC has underwent a 360° environmental check*1 by a German third-party certification body TÜV SÜD. Based on eco-balance, comprehensive verification was conducted on the environmental impact throughout the vehicle’s life cycle, from raw material mining to production and use,*2 and final disposal.

・The EQC model is a BEV. It is emission free during operation and benefits from the high energy efficiency of the motor drive. However, CO2 emission is higher during production compared to conventional vehicles. – Depending on the energy mix during vehicle operation, CO2 emissions during production can be compensated. – If BEVs could be operated using only renewable energy sources, CO2 emissions would be reduced by up to 70% over their entire life cycle compared to vehicles equipped with combustion engines.

・BEVs require a large amount of energy, especially when producing battery cells. Procurement of CO2 neutral energy at the production stage is the key to CO2 neutral throughout the life cycle. ・Daimler also plans to achieve CO2 neutral at all production facilities in Europe by 2022 according to the automaker’s Ambition 2039 vision. – In Germany, energy will be sourced from state-owned wind power plants. Based on the Renewable Energy Sources Act (abbreviated in German as EEG), subsidies will be abolished after 2020. Daimler will be the first industrial customer to purchase energy generated by state-owned wind turbines in Northern Germany. – The purchased renewable energy will be used at the Bremen plant, which produces the EQC, and at Deutsche Accumotive, a battery-related subsidiary in Kamenz, Saxony. ・Daimler is also requesting suppliers to be CO2 neutral for battery cell production. In September 2019, the company formed a partnership with China-based Farasis Energy to procure battery cells produced by renewable energy.

・During the EQC’s 360° environmental check, the disposal, use and consumption of resources throughout their life cycle was also verified by experts. ・The EQC’s material composition is 39% steel and iron, 23% aluminum, and 18% polymer and resin. Richer materials are used compared to a conventional vehicle and the amount of energy sources required for that is also greater. – For this reason, Daimler has further reduced the use of resources and the impact of the materials used on the environment. It was one of the focus points of the EQC’s development. – In the future, the company has set a target to reduce the use of primary raw materials used for manufacturing powertrains and batteries of electric vehicles (BEV, PHEV) by 2030. The company has set a target of 40% decrease compared to current electric vehicles. – Daimler is constantly expanding the use of resource saving materials such as recycled resins and renewable raw materials. – As an example, a high-quality elastic decorative fabric derived from 100% recycled PET bottles has been newly developed for the EQC. – Recycled plastic is also used for general purposes, such as lining the recesses of the spare wheel and using as the undercover of the engine compartment. – Daimler also uses renewable raw materials such as hemp, kenaf, wool, and paper. Kenaf is used for the luggage compartment lining and paper honeycomb is used for the luggage floor.

Building a process for secondary use of high-voltage batteries

・All materials of Mercedes-Benz models including the EQC meet ISO 22628 standards*3 and are 85% recyclable and 95% reusable. ・Daimler is promoting research and development of new recycling technologies to secure demand for raw materials used for BEVs. With regard to lithium-ion battery recycling, Daimler has built up know-how in cooperation with suppliers and waste disposal companies. – Battery recycling is divided into four stages. A corresponding process has been developed for each stage. – Recycling of used materials such as lithium, nickel, platinum, cobalt, rare earths has become an essential consideration. 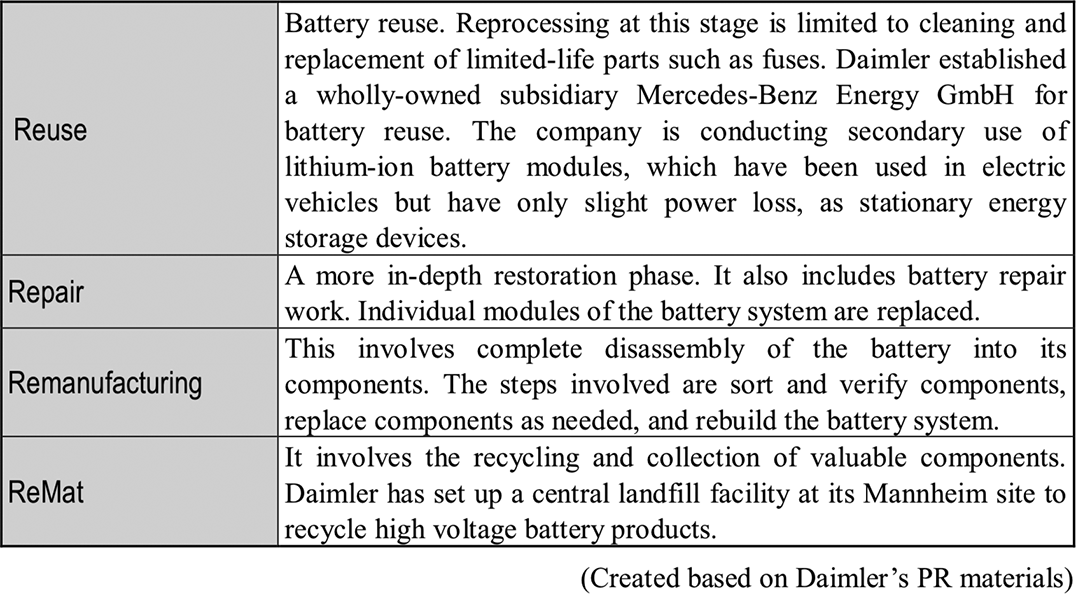 *1 One of the comprehensive evaluations using the LCA method. LCA is standardized by ISO 14040. Recently, attention has been paid to Green NCAP environmental ratings. *2 Measured based on 200,000 km distance traveled by EQC. Generally, evaluations are based on 150,000–300,000 km traveled. *3 Car recycling / recovery rate calculated from each LCA stage.

Other Automakers: Latest Trends Toward “2050 Carbon Neutral” Throughout the Life Cycle

・Toyota is strengthening its LCA’s comprehensive and specific initiatives based on the Toyota Environmental Challenge 2050 announced in October 2015, which aims to achieve zero CO2 emissions by 2050 throughout its products’ life cycle. In the medium term, Toyota aims to achieve a plan set as the 2030 Milestone (see below).
Please log in or subscribe to AAA weekly to view the rest of this report.
Free trial subscriptions are available!