Honda Motor’s share in ASEAN (five countries) is declining. The automaker’s market share peaked at 14.3% in 2017 thanks to the launch of the seven-seater subcompact crossover BR-V but it gradually declined in the following years, reaching 10.0% in the first half of 2021. Although the popularity of SUVs is increasing in Honda’s main markets Indonesia and Thailand, the automaker’s sluggish market share is attributed to the declining demand for its outdated small SUVs the BR-V and HR-V which are positioned as core SUV models in ASEAN.

Looking at sales results in the first half of 2021, sales in Indonesia increased 25.1% year-on-year to 48,000 units, but Honda’s market share dropped 2.5 pp to 12.3%. Sales of the Brio Satya and Brio increased thanks to tax reduction measures implemented on certain models from March 2021. The City hatchback, which was launched in March 2021 as a successor model to the Jazz also boosted sales. In Thailand, Honda’s sales increased 3.4% to 43,000 units, but market share fell 1.1 pp to 11.4%. The City sold 23,000 units, up 33.3% year-on-year. After the sedan version underwent full-model change in November 2019, the hatchback model was introduced in November 2020. Both models sold equally well, each accounting for 50% of all City sales. The hybrid version of the City sedan was released in November 2020 followed by the hybrid hatchback in June 2021. As of July 2021, the market share of hybrids within the City series was 6.3%.

・From April 13th until the end of July 2021, the Karawang plant in West Java province was shut down due to the spread of the new coronavirus infection. - The resumption of production was initially scheduled for June 11, but it was extended until the end of July to adjust inventories against the backdrop of sluggish domestic demand.

・In March 2021, Honda announced that it would release the City Hatchback RS (5th generation) in Indonesia. - Manufactured in Indonesia. - The powertrain combines a 1.5L four-cylinder i-VTEC gasoline engine with a CVT or six-speed MT. - It is positioned as a flagship hatchback model to replace Jazz, whose local production was discontinued by March 2021. - In Thailand, three grades the S +, SV and RS are available, but in Indonesia, only the sporty RS model is on the market. In Indonesia, the RS has been a very popular grade, accounting for more than 90% of all Jazz sales. - Sold for 289 million-299 million IDR. - Honda targets young consumers with the new City. - Monthly sales target is set at 1,000 units. - Meanwhile, the sedan version has not been upgraded to the 5th generation (as of August 2021).

・In May 2021, Honda held the world premiere of the NX7 seven-seater crossover concept. - The model is intended to capture demand from Generation X (born 1965- 1979) families. - Honda R&D Asia Pacific in Thailand was in charge of development. Honda has aimed for a model that combines the convenience and comfort of MPVs and SUVs. Details such as information on commercialization have not been announced. - In addition to Jakarta, the model is scheduled to be exhibited in Bandung, West Java province, Semarang, Central Java province, Surabaya, East Java province, and Makassar, South Sulawesi province.

・In August 2021, Honda released the new premium sports sedan Civic (11th generation) in Thailand. - The new Civic was launched in Thailand after its release in the USA in June 2021. - It is equipped with a 1.5L VTEC turbocharged gasoline engine. The 1.8L i- VTEC gasoline engine which powered the previous generation is not longer used. - Equipped with Honda’s safe driving support system Honda SENSING. - Available in three grades, EL, EL+ and RS. Sold for 964,900-1,199,900 THB. - The sales target for 2021 is set at 10,000 units and at 17,000 units for 2022 and after (including exports). - The release of the HEV version is under consideration.

・In December 2020, Honda Drop & GO, an online reservation service of aftersales service, was launched in response to the outbreak of the new coronavirus infection. - Customers can set up an appointment, check service status and make payments with the new service. - The service was first launched in Bangkok, but the service area is planned to be expanded.

・In April 2021, Pitaka Pruittisarikorn COO became the Chairman of the Board of Honda Automobile (Thailand).

・On August 27, 2021, production resumed at the Melaka plant, which had been suspended in response to the lockdown measures issued by Malaysia in June 2021. Dealerships were also closed. Only some aftersales service bases were operating with a minimum of personnel and advance reservations. ・By mid-August 2021, Honda Malaysia aimed to have all employees have their first vaccination.

・In October 2020, the new City sedan was launched in Malaysia. - Available in four grades, V, E, S and RS. - Honda added the e:HEV version to the RS grade in January 2021. It is equipped with Honda’s safe driving support system Honda SENSING and with Honda’s in-vehicle connected system Honda Connect. It also features Collision Mitigation Braking System (CMBS), Adaptive Cruise Control (ACC) and Lane Keeping Assist System (LKAS) among other functions. By utilizing telematics technology, Honda has adopted functions such as security alerts that notifies the occupants when the door or hood of a vehicle opens and car search that allows the driver to check the location of the car on a map on a smartphone. - The RS e:HEV version is sold for 105,950 MYR while the other three grades are offered for 74,191-86,561 MYR. - Monthly sales target is set at 3,000 units.

・In August 2021, Honda announced that it would offer discounts on locally produced Jazz, City, BR-V, Civic, HR-V and Accord models to promote sales. - As an economic stimulus measure, passenger car sales tax is exempted from June to the end of December 2021. For instance, the price of Jazz 1.5S has been reduced by 3,000 MYR compared to the price after the sales tax exemption. Compared to the price before the exemption, the price is reduced by 5,789 MYR.

・In April 2021, Chujo Madoka was appointed as the new President and CEO of Honda Malaysia. - Before her new appointment, she was the Vice President of Honda Canada.

Relaunching production of the CR-V

・In July 2020, a new version of the CR-V was introduced in Vietnam. - With the introduction of the 5th generation three years ago, Honda switched to imports from Thailand, but now assembly was relaunched in Vietnam again. - It is equipped with Honda’s safe driving support system Honda SENSING. It also features Collision Mitigation Braking System (CMBS), Auto High- Beam Headlights, Adaptive Cruise Control (ACC) with off-road deviation suppression function and traffic jam tracking function, and Lane Keeping Assist System (LKAS). - The suggested retail price is 998 million-1,118 million VND. - The annual sales target is set at 13,000 units. - As the number of locally produced models has increased to two models, City and CR-V, production has been changed from one shift to two shifts. As a result, annual production capacity in Vietnam has increased from 10,000 units to 23,000 units. - The local procurement rate of the new CR-V is 15% (on a monetary basis). The engine is imported from Thailand.

・In January 2021, the new City (5th generation) was launched. - Manufactured in Vietnam. - The powertrain combines a 1.5L four-cylinder i-VTEC gasoline engine with a CVT. - Available in three grades, RS, L and G. - Sold for 529 million-599 million VND. - In ASEAN, it was launched in Thailand for the first time in November 2019, followed by Malaysia, the Philippines and Vietnam.

・In April 2021, Mihara Daiki was appointed the new president of Honda Vietnam. - Before his new appointment, he was the General Manager of Honda’s Motorcycle Business Planning Department.

・In March 2021, the automobile plant in Santa Rosa, Laguna province, was closed, Honda ending production in the Philippines. - Production began in 1992. Annual production capacity of the plant was 30,000 units and it manufactured the City and BR-V models. Production volume was 7,000 units in 2019. - Honda plans to sell imported cars and continue aftersales service even after the factory is closed.

・In April 2021, the new City hatchback (5th generation) was launched. - Only the RS grade is sold in the Philippines. - The powertrain combines a 1.5L four-cylinder DOHC i-VTEC gasoline engine with a CVT. - Sold for 1,115,000 PHP. - In April 2021, Honda announced to end the sales of the Jazz in the Philippines. The new City hatchback is positioned as the successor model of the Jazz.

・In August 2021, the Philippine government implemented an emergency import restriction measure for automobiles. As a result, Honda announced that the price of four models, including the City and Civic, will be raised by 7,000-60,000 PHP to cover the additional tariff charges.

・In August 2020, Honda officially launched VIRTUAL @ Honda, an online dealership for new car sales and aftersales service, in the Philippines. - In addition to the virtual showroom, customers can chat with their favorite sales network, apply for a loan and make a reservation for a test drive. (Created using Honda Motor’s PR materials and various media sources) 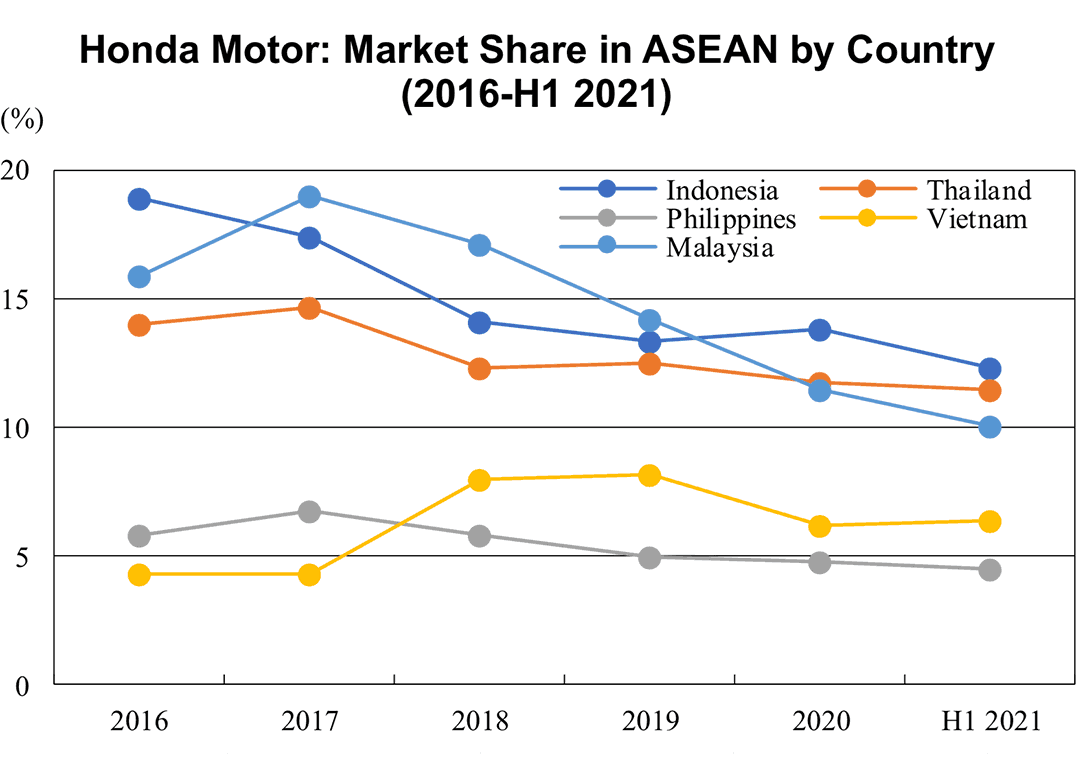 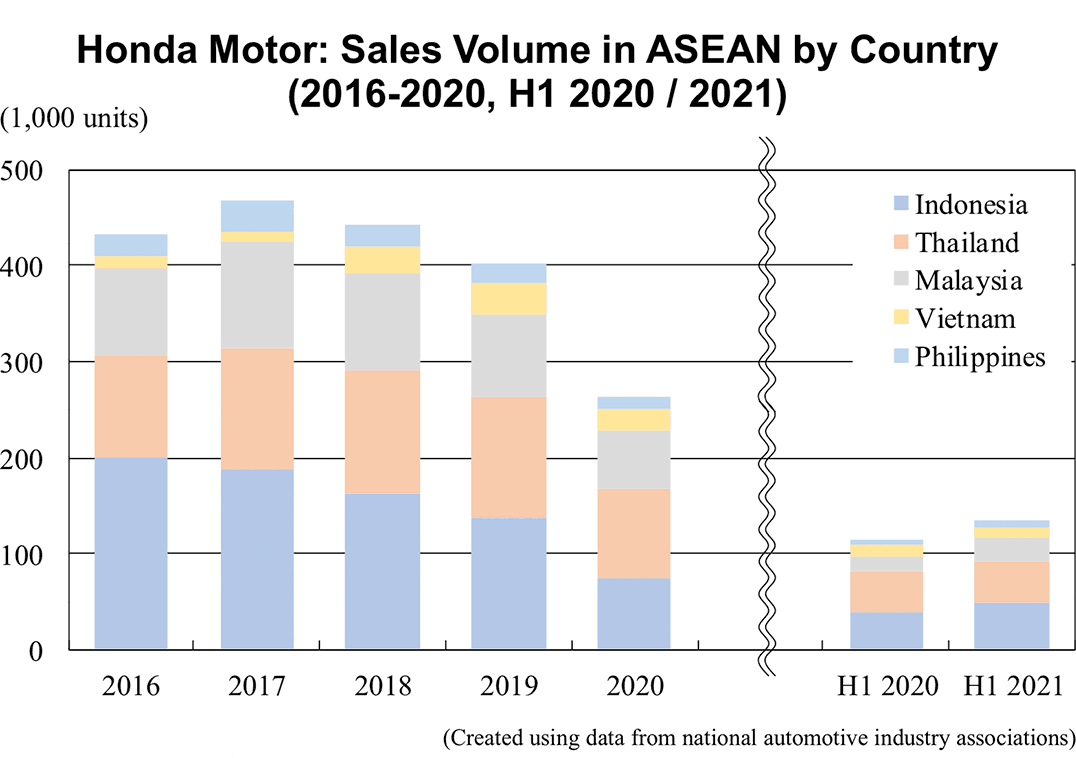 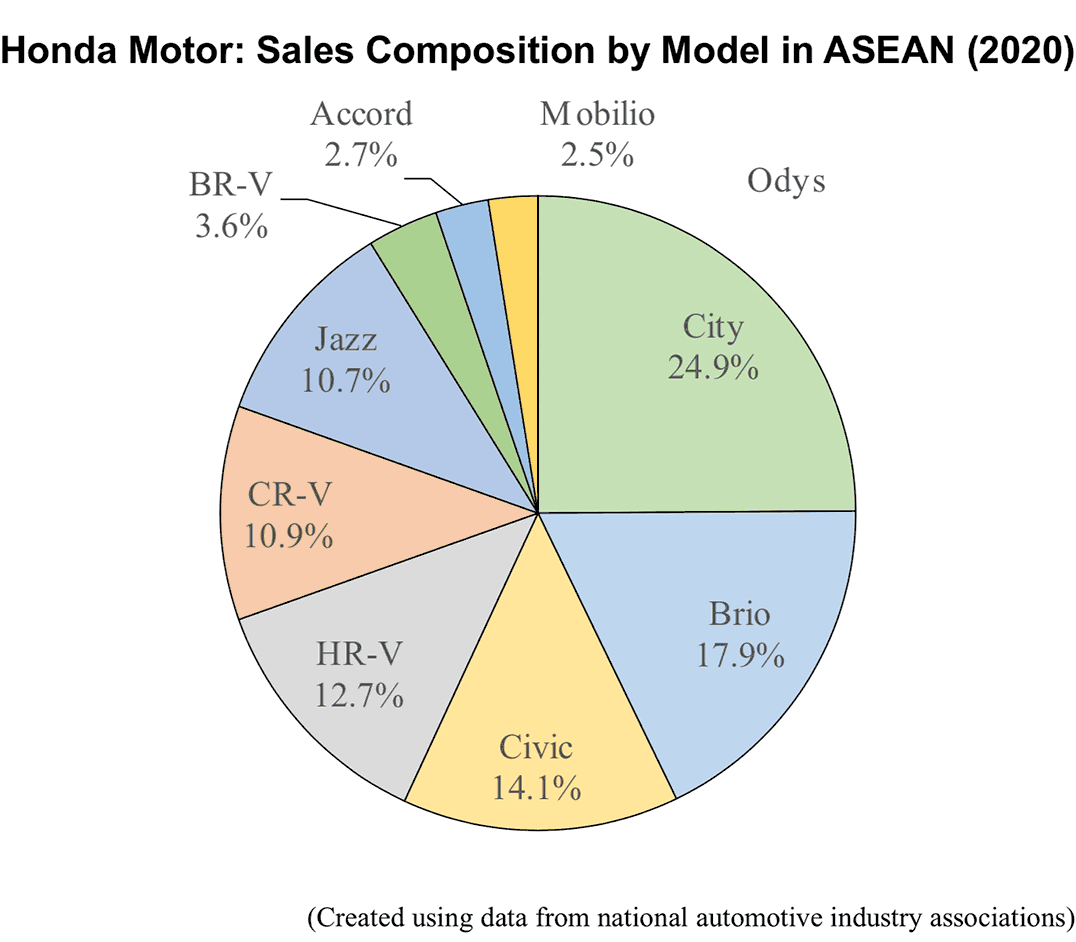 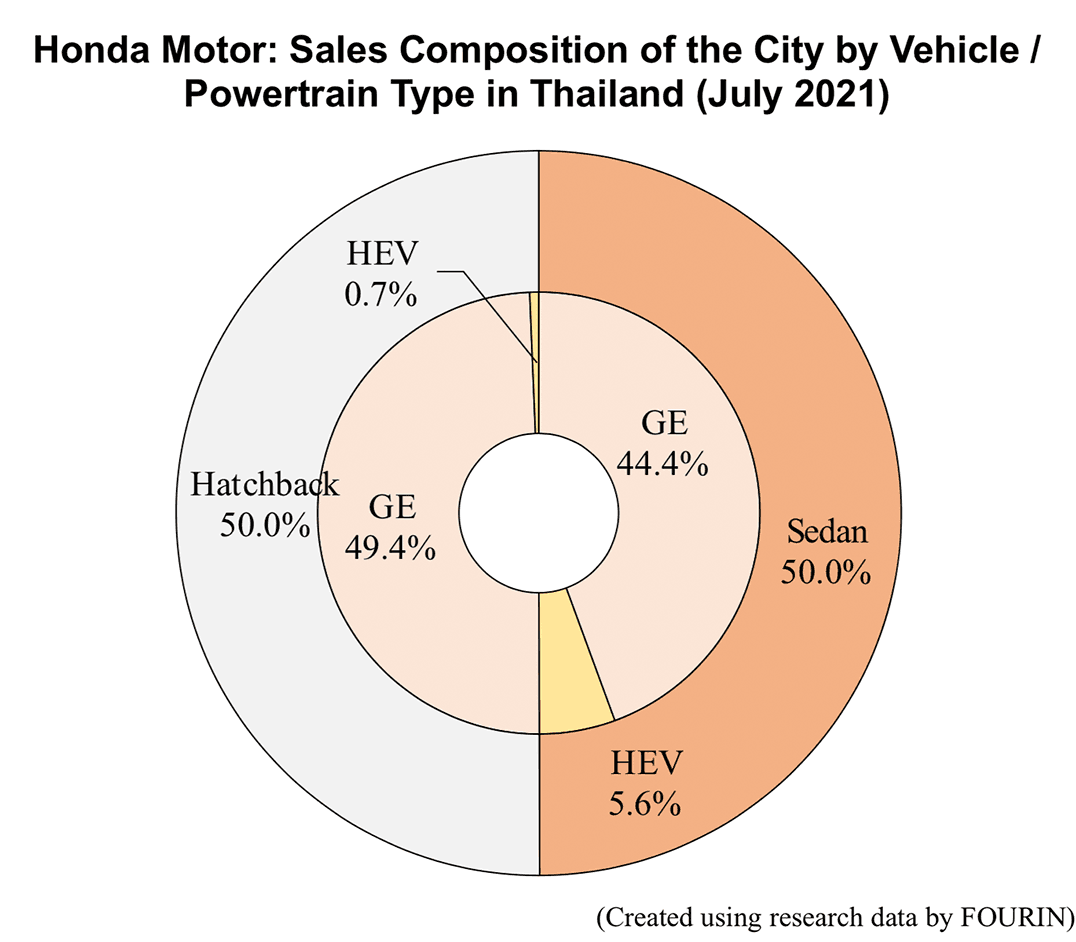 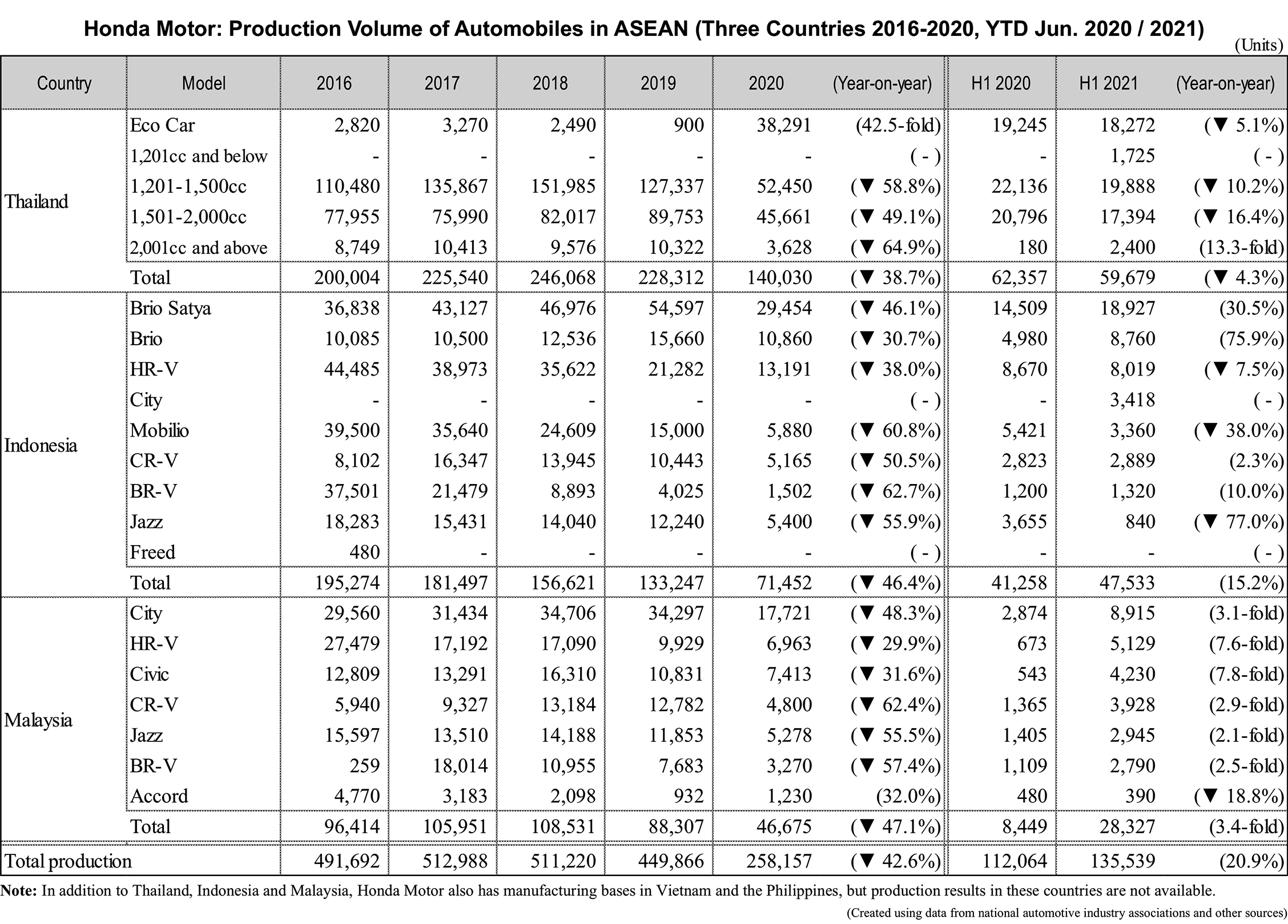 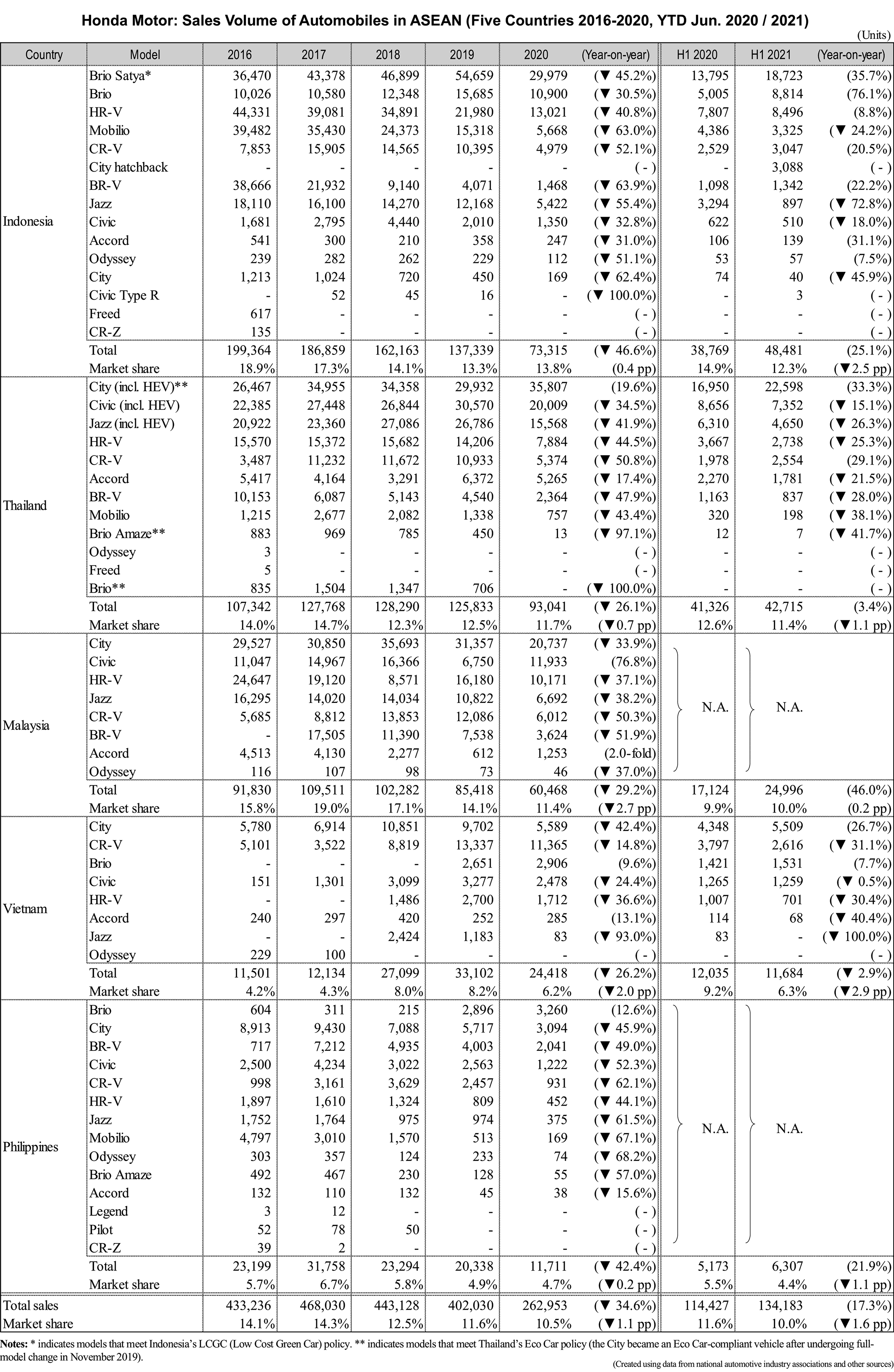