Toyota Motor is promoting a full lineup of electric vehicles to expand options for reducing CO2 emissions toward the realization of carbon neutrality by 2050. As part of this goal, the new BEV series TOYOTA bZ was announced in April 2021. TOYOTA bZ is targeting regions such as China, the United States, and Europe where demand for BEVs and power supply from renewable energy are high. Toyota plans to roll out 15 BEV models by 2025, of which seven models will be part of the TOYOTA bZ series. Since it is challenging for Toyota alone to introduce BEVs of various sizes and styles, the TOYOTA bZ series is being developed in collaboration with various partners. The first model, the TOYOTA bZ4X, has been jointly developed with Subaru. It is planned to be produced in Japan and China and will be released globally by the middle of 2022.

・In April 2021, Toyota announced the new BEV series TOYOTA bZ. - It is part of Toyota's "Full Lineup of Electric Vehicles" plan. - Toyota will introduce 15 BEV models by 2025. Of the 15 models, seven will be part the TOYOTA bZ series. - TOYOTA bZ is a product series that is intended to expand sales in regions such as China, the United States, and Europe, where demand for BEVs and power supply from renewable energy are high. - The bZ is built on a BEV-dedicated platform. - bZ is an abbreviation for “beyond Zero.” The idea is to provide value that goes beyond zero emissions. - The TOYOTA bZ series is developed in collaboration with multiple partners. 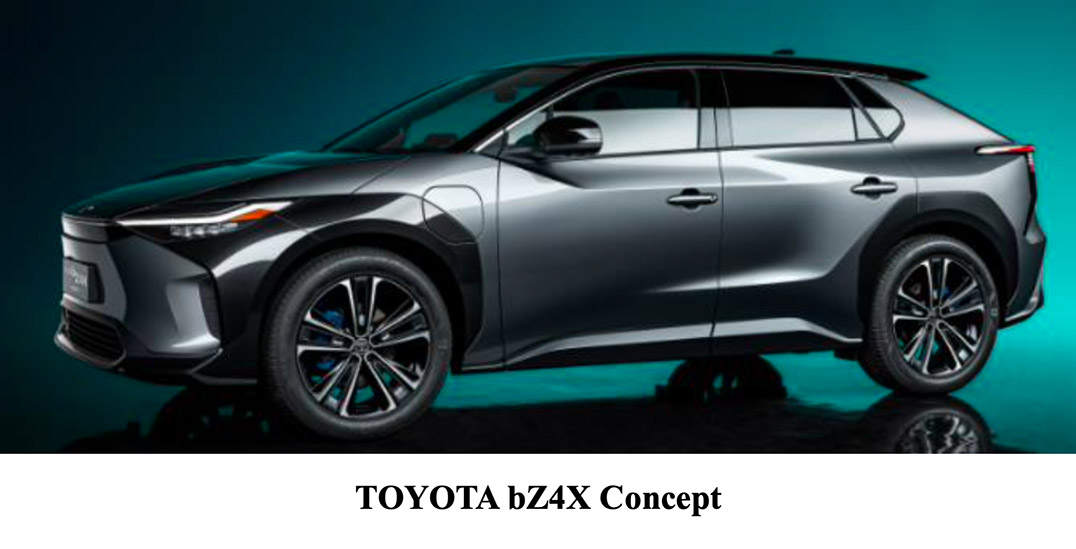 ・In April 2021, Toyota announced the TOYOTA bZ4X Concept, the first in the TOYOTA bZ series, at the Shanghai Motor Show in China. - It is an SUV type BEV jointly developed with Subaru. - The model is built on the e-TNGA BEV-dedicated platform and features a new AWD system jointly developed with Subaru. - Toyota’s goal is to maintain a battery capacity retention ratio of 90% after 10 years. - It is fitted with roof solar panels which enables the vehicle to charge in parking lots where there are no charging stations. Solar power can also be used to charge in disasters or other emergencies. - The bZ4X features steer-by-wire technology which is supplied by JTEKT according to some media sources. - The steering yoke has a quadrangular shape. However, in the image which was released in the United States in June 2021, the bZ4X had a standard steering wheel. - The bZ4X is planned to be produced in Japan and China, and global sales are scheduled to start by the middle of 2022.
Please log in or subscribe to AAA weekly to view the rest of this report.
Free trial subscriptions are available!