Malaysia’s automobile production increased 1.2% year-on-year in 2019 to 572,000 units. It increased for the second consecutive year, driven by increased production by Perodua, Proton and Toyota which enjoyed strong domestic sales in 2019. Although production did not return to the scale of 2013-2015, when it peaked at around 600,000–610,000 units, it was the fourth highest level. 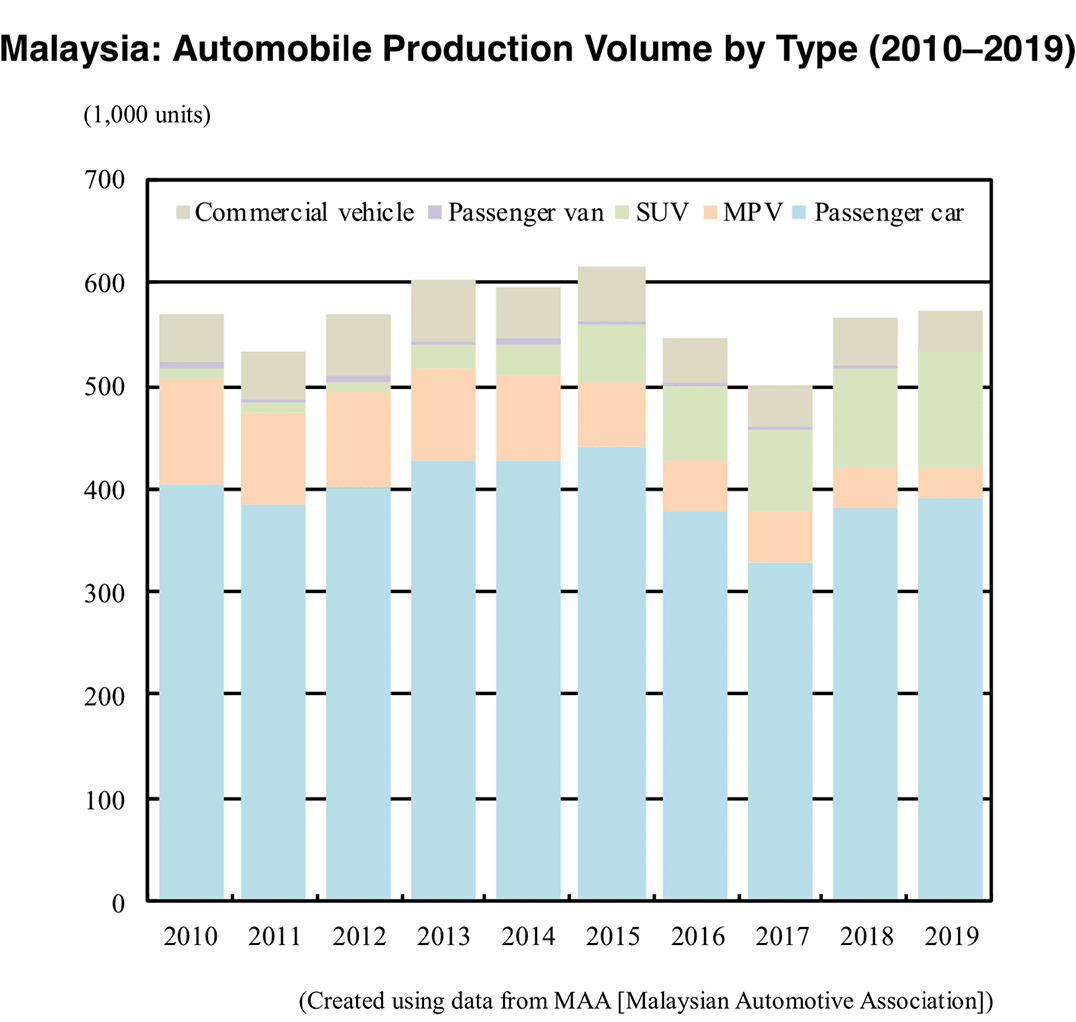 Looking at production by brand, market-leader Perodua increased 3.1% to 244,000 units, reaching a record high level for the second consecutive year. Although all existing models decreased, the automaker’s first SUV model the Aruz, launched in January 2019, added 29,000 units to the total. In addition, Perodua also made 3,022 units of the Toyota Rush, sister model of the Aruz, under an OEM supply agreement with Toyota. Proton, ranked third in 2019, increased 35.4% to 73,000 units. Production increased significantly thanks to strong sales of passenger cars such as the facelifted Saga, which was launched in mid-2019. Proton began local production of the SUV X70, which was previously imported from China, at the end of 2019. It is expected to contribute to increased production in 2020. Toyota went up 21.1% to 60,000 units. In addition to strong sales of the Vios and Hiace, the Yaris went into local production in April 2019, pushing up overall production volume. Meanwhile Honda, ranked second in 2019, dropped 18.6% to 88,000 units.

Malaysia: Excise Tax on CKD Vehicles Expected to Increase from 2021

・From January 2021, the excise tax on CKD vehicles is expected to increase substantially due to the revision of the taxation standard on vehicles assembled locally from CKD kits. –The Malaysian government announced the revision of the excise tax system in the official gazette (P.U. (A) 402) dated December 31, 2019. The government revised the calculation method of OMV (Open Market Value) used as a taxation standard for excise tax. In the case of vehicles assembled from CKD kits, the current OMV reflects the cost at the manufacturing stage, but after the revision, not only the manufacturing cost but also the cost at the distribution and sales stages after factory shipment will be added to OMV. This will substantially increase the excise tax rate. –This revision has been applied since January 2020, but it has been announced that the government will bear all tax increases for one year until December 31, 2020. It is under consideration that manufacturers to bear the tax burden from after 2021, likely resulting in higher vehicle prices. (Created using Malaysian government documents and other sources)