Looking at BMW’s recent business trends in ASEAN and India, increasing focus on electric vehicles in Thailand and Malaysia and the introduction of non-face-to-face sales and services in the wake of the new coronavirus are notable. The sales performance of BMW and its small car brand MINI in the premium markets of ASEAN and India was second only to Mercedes-Benz in 2019. With an aim to further strengthen its presence in ASEAN and India, BMW is stepping up business activities to expand sales.

Looking at electric vehicle operations, BMW is expanding production in Thailand. In July 2019, the Thai subsidiary of Dräxlmaier, which has a partnership with BMW in battery localization, began assembling batteries and modules for BMW’s PHEV models. In July 2020, the locally-produced X3 PHEV was launched, expanding BMW’s Thai PHEV lineup to five models. In addition, the local assembly of PHEVs is continuing in Malaysia. In both countries, BMW is promoting sales of electric vehicles including the expansion of the local charging infrastructure.

Looking at sales and services, BMW has begun to introduce new forms of services that do not require face-to-face contact with customers. In April 2020, BMW introduced its own service the BMW Contactless Experience in India. The system allows customers to complete vehicle purchases, service reservations and payments online. In Indonesia and Malaysia, BMW has also started to set up virtual showrooms and accept online repair services. Simultaneously with its own services, BMW is also expanding alliances with local e-commerce providers. BMW partnered with Lazada in Singapore and began selling cars online in August 2019. In Indonesia, the automaker partnered with Tokopedia and launched online car sales in April 2020.

・In July 2019, DTS Dräxlmaier Automotive Systems (Thailand), the Thai subsidiary of Dräxlmaier, which formed a battery production tie-up with BMW, started production of batteries and battery modules. – BMW obtained investment approval from Board of Investment of Thailand (BOI) for PHEV battery production in November 2018. The investment amount is 500 million THB. – BMW introduced the battery to the 530e (PHEV) in September 2019. – In July 2018, BMW obtained an investment license for PHEV production from BOI. ・In August 2020, two charging stations were set up for electric vehicles. – Six ChargeNow charging stations have been installed at the Emporium and EmQuartier commercial facilities in Bangkok. – As of August 2020, 141 ChargeNow charging stations have been installed in 63 locations in Thailand. Of these, 91 are public and 50 are installed at BMW authorized dealers. The number of public facilities is planned to be expanded to 100 by the end of 2020.

・In December 2019, BMW began exports of the new X5 to China. – In 2016, BMW started exporting CBUs from Thailand to China initially exporting two models the X3 and X5. Since 2018, when local production of the X3 began in China, only the X5 has been exported.

・In March 2020, the BMW Group Corporate Sales Program, a new program for corporate sales, was launched. – The previous program was the BMW Business Alliance, which started in 2017 and had contracts with more than 100 companies. – The new program also includes the MINI brand. During the contract period, a maintenance package of 5 years / 60,000 km or a 36-month unlimited mileage warranty is provided. ・In March 2020, BMW partnered with Citibank to launch a program to reduce interest rates for up to 24 months to 0%. – The program covers Citibank customers, offering up to 300 million INR. ・In April 2020, BMW began new car sales through Tokopedia, the largest local e-commerce company. – After paying the reservation fee online, the authorized retailer will make an appointment with the customer and proceed with the purchase procedure. – The service launch date coincided with the introduction of 320i Touring M Sport. Models offered through the service as of September 2020 were the 3, 5, and 7 Series as well as the X1, X3, X5 and X7 models. ・In August 2020, BMW started a virtual showroom. – Customers can browse the showroom through a dedicated online site.

・In June 2019, new charging stands called Reserve + Shell Recharge Bays were installed. – The stands were installed in partnership with ParkEasy, Shell Malaysia and Sunway Group. – BMW owners can book Reserve + Shell Recharge Bays through mobile app provider ParkEasy. ・In June 2020, BMW launched a new battery warranty program for PHEV models of the BMW and MINI brands. – The program extends warranty by two years and 60,000km to 8 years and 160,000km. – Only vehicles sold at authorized dealers from June 2020 to the end of December 2020 are covered by the program.

・In August 2020, BMW partnered with Allianz Worldwide Partners to start Door-to-Door service. – BMW goes to the owner's home to pick up the vehicle for inspection. The automaker also provides car delivery service to the owner’s home.

・BMW introduced a digital showroom in May 2020. – Customers can get special offers, get the latest information, browse vehicles, specs, price lists and other data.

・In December 2019, the fully-redesigned 330e was released. ・In March 2020, the X3 xDrive30e was launched. – The model is imported from the US. ・In August 2020, the MINI Electric (BEV) was released. – The same model is sold as the MINI Cooper SE in Thailand, Malaysia and elsewhere.

・In July 2019, BMW’s subscription service Access by BMW was launched. – BMW Financial Services Singapore has teamed up with Sime Darby Services to launch this new service in Singapore. – Globally, Singapore is the second country where the service is offered following the United States. – In addition to monthly subscription, three-month plan is also available. ・In August 2019, BMW launched new car sales through Lazada, an e-commerce company. – The launch of the service coincides with the release of the new 1 Series. ・In June 2020, the MINI Easy Finance payment program was launched. – The deferment rate is set up to 60% of the vehicle price. The payment period is two years. Monthly payment amount starts at 128 SGD. 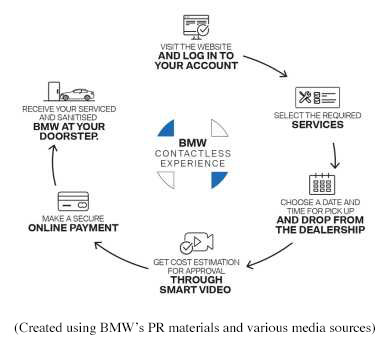 ・In October 2019, BMW introduced BMW Smart Video, a smartphone app that allows owners to check the repair status of their vehicle in real time. – By having the mechanic make a video of the parts that need repair, customers can check the parts through the app without having to go to the repair shop. ・In April 2020, BMW introduced the BMW Contactless Experience online service. – Customers can purchase new or certified used cars, book services and make payments online. – Customers can use BMW Smart Video to estimate repair costs.
Please log in or subscribe to AAA weekly to view the rest of this report.
Free trial subscriptions are available!