Mitsubishi Motors: 2019 ASEAN Sales Fell By 1.0% To 310,000 Units, But Increased In Thailand and Vietnam Thanks To Xpander

Mitsubishi Motors's unit sales in 2019 in six ASEAN countries fell by 1.0% year-on-year to 313,000 units. This is the first decline in 3 years, but the unit sales remained above 300,000 units for the second consecutive year. The automaker plans to take selection and concentration business strategies rather than an omnidirectional strategy. It sees ASEAN as a priority region and concentrates management resources there. In addition, in the alliance with Renault and Nissan, Mitsubishi Motors is considered playing a leading role in ASEAN. It aims to strengthen its presence there in terms of both production and sales. The market is expected to be sluggish in 2020 due to the impact of the COVID-19 pandemic, but the introduction of products and expansion of the sales network will likely continue. The unit sales of 2019 in Indonesia, which is the highest-selling country for Mitsubishi Motors, dropped by 16.7% year-on-year to 119,000 units. It also fell by 3.1% to 64,000 units in the Philippines, by 12.1% to 8,140 units in Malaysia, and by 8.0% to 3,020 units in Singapore. On the other hand, Xpander contributed to the sales increase throughout the year for the first time in Thailand, resulting in increasing 4.4% to 88,000 units. The sales in Vietnam also increased 3 times to 31,000 units thanks to Xpander. 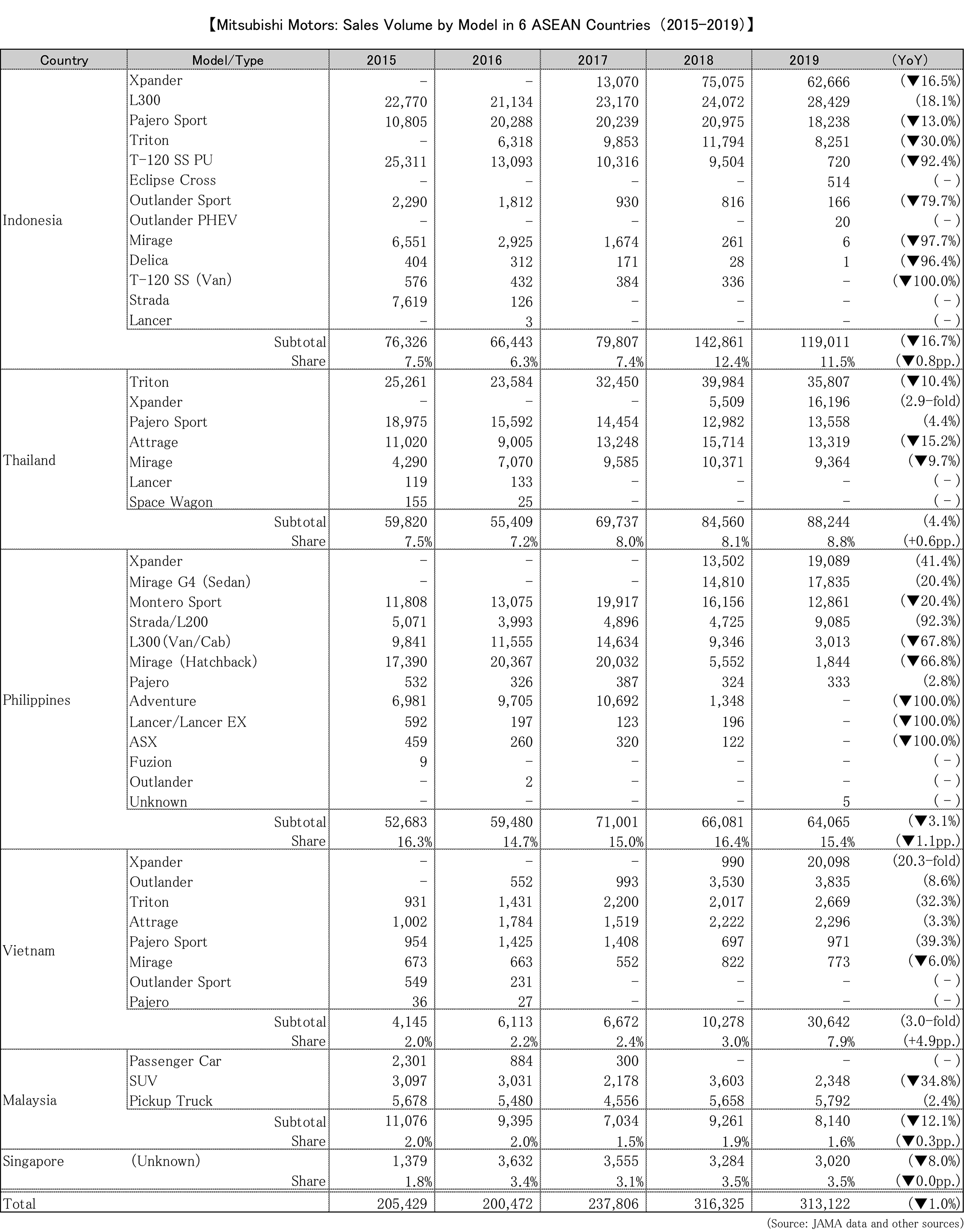 Mitsubishi Motors intends to strengthen its business by taking Xpander as a successful model in ASEAN, and as another step, it introduced Xpander Cross to Indonesia in November 2019. As of June 2020, the automaker has launched the model to Thailand and the Philippines. Mitsubishi Motors is also promoting electrification. In 2019, it launched the Outlander PHEV in Indonesia for the first time in the ASEAN region, and also plans to launch the PHEV in Thailand in 2021. In anticipation of expanding sales of electric vehicles in ASEAN, the company is rolling out more charging stations in Indonesia and is aiming to open the DENSO DRIVE STATION in the Philippines for electric vehicles and V2H experience by the end of 2020.