Since the beginning of 2019, automakers have begun to revise their capacity expansion plans against the backdrop of a prolonged slowdown of domestic sales. Looking at new plant projects, Suzuki delayed the launch of its third plant in Gujarat state from April 2020 to July of the same year. VECV, a joint venture between Volvo Group and Eicher Motors, has reduced its initial investment in a new plant scheduled to start operation in 2020 from 4 billion Indian rupees to 2.5 billion Indian rupees. In addition, some automakers are revising their entire operations in India due to the chronic slump in sales. Ford has decided to switch most of its Indian operations to a joint venture with Mahindra, and GM has announced that it will sell its Talegaon plant, which has been used as an export base, to Great Wall Motor and withdraw from India. However, in parallel with these developments, Kia and SAIC Group started automobile production in 2019, and Great Wall Motor has also decided to expand into India through the acquisition of GM’s Talegaon factory, indicating that new players are anticipating growth in the medium to long term. 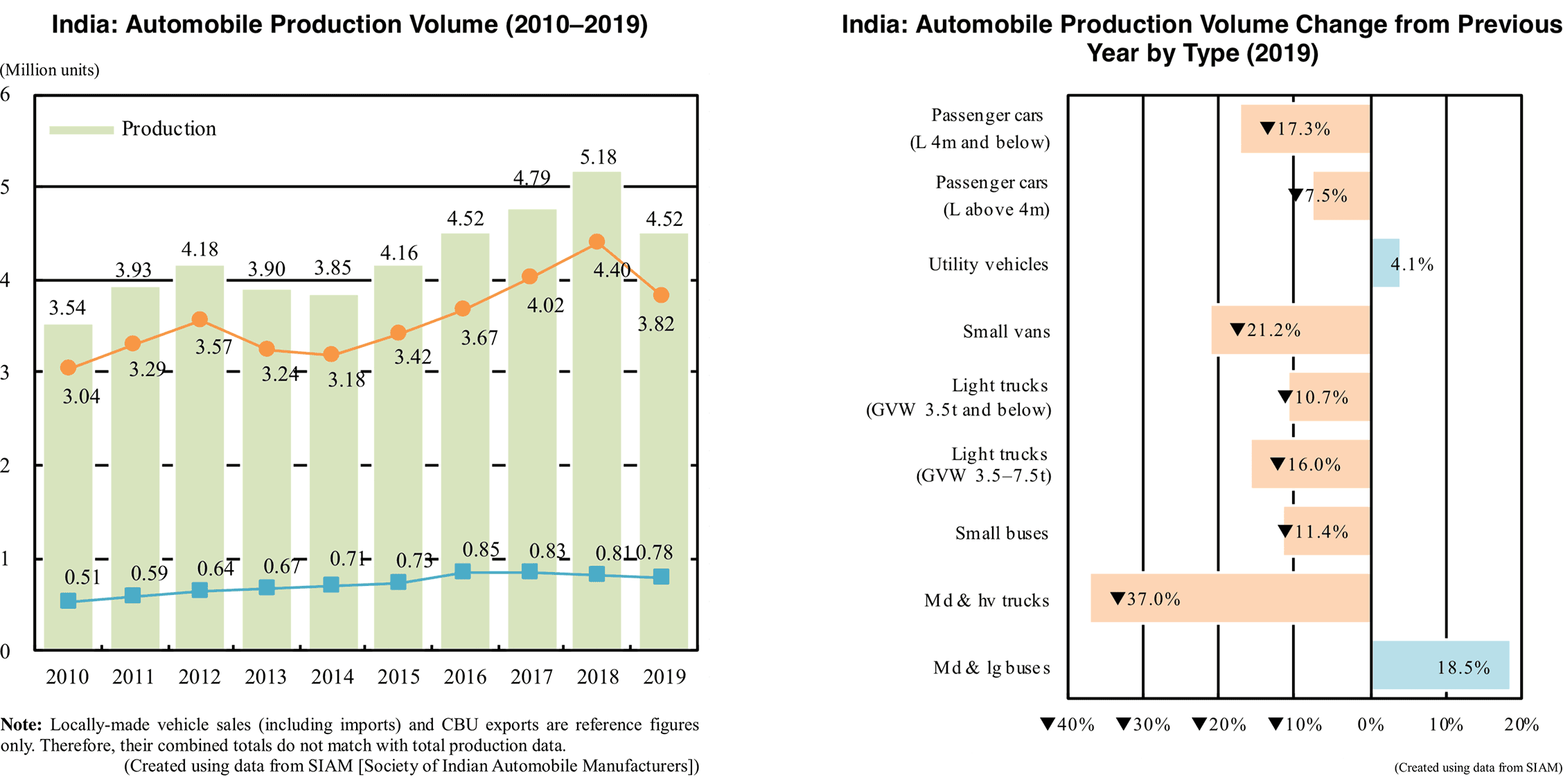 Passenger cars drop over 16%, while utility vehicles continue to increase

Looking at production by automakers, nearly all manufacturers declined across the board. India’s largest automaker Maruti Suzuki (including Suzuki Motor Gujarat), dropped 12.9% to 1.63 million units. Although light commercial vehicles increased 12.6% to 27,000 units, passenger cars dropped 14.1% and utility vehicles declined 3.0%, most of Suzuki’s lineup of mainstay passenger vehicles seeing a drop in production. OEM production for Toyota, which started in April 2019, reached 18,000 units by the end of the year.

India’s second largest automaker Hyundai dropped 4.4% to 682,000 units. The decrease was small compared to other automakers due to the net increase of the Venue compact SUV and the expansion of exports. As for major Indian automakers, Tata Motors decreased 23.5% to 551,000 units and Mahindra & Mahindra declined 9.8% to 481,000 units. The two new entrants in India’s automotive industry Kia and SAIC Group manufactured 55,000 units and 17,000 units respectively. 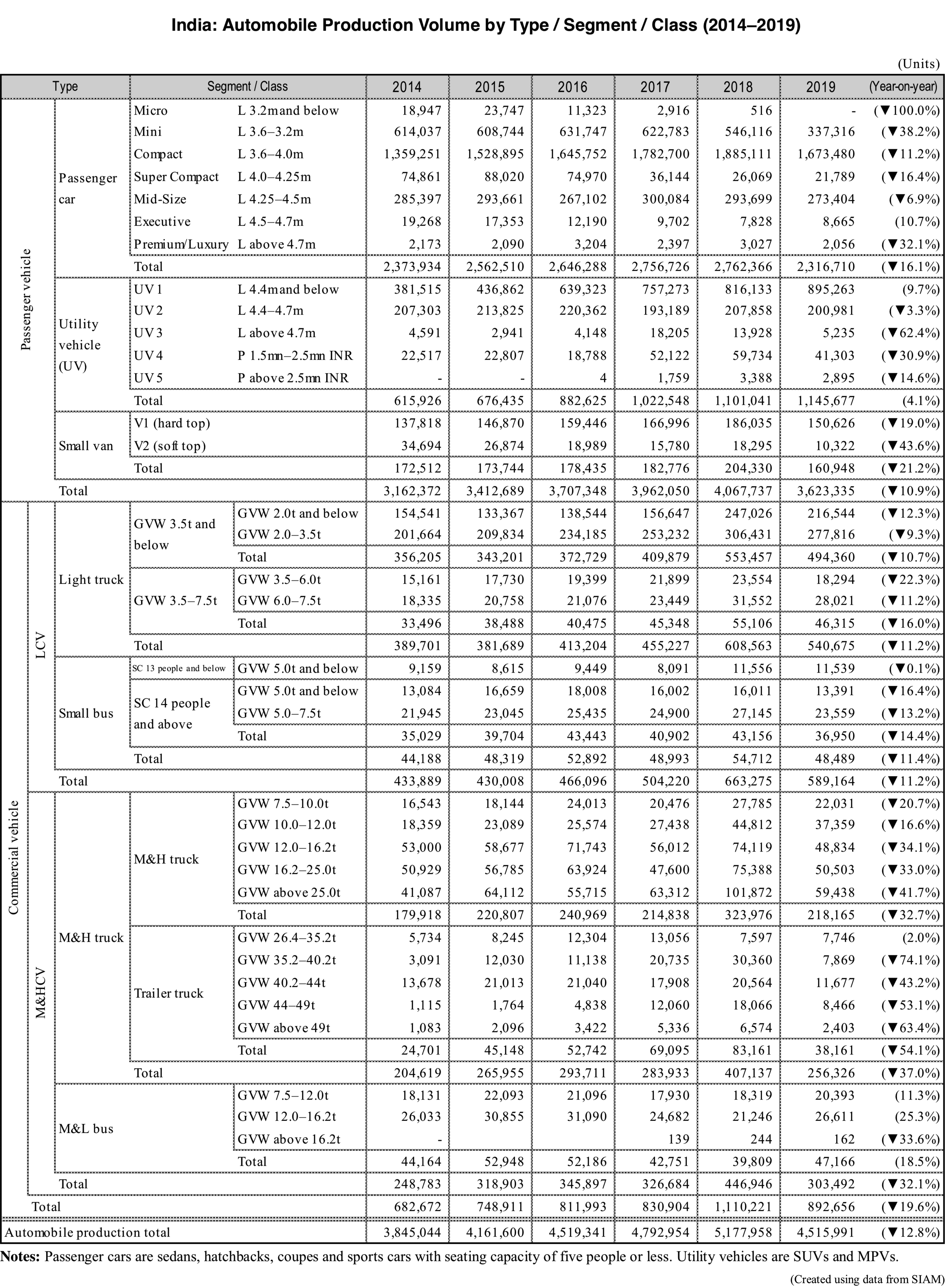 ・In April 2020, VE Commercial Vehicles (VECV), a joint venture between Volvo Group and Eicher Motors, is scheduled to launch a new plant in Bhopal, Madhya Pradesh state. – Construction of the new plant began in October 2018. Initially, the investment amount was set at 4 billion Indian rupees. The factory is intended to manufacture truck and buses with an annual production capacity of 40,000 units. Engine manufacturing equipment is also planned to be introduced. – As of March 2020, operation was still scheduled to be launched in April of the same year, but the initial investment amount was reduced to 2,5 billion Indian rupees. The new plant was going to have coating equipment as well, but according to local media sources, this investment will be postponed by utilizing the equipment and personnel of the existing plant in Pithampur, Madhya Pradesh state. 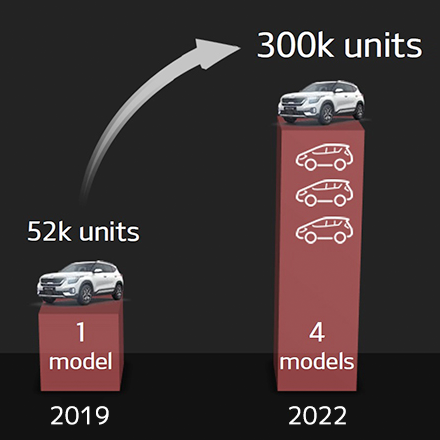 ・In August 2019, Kia began automobile production in India. – The plant is located in Anantapur, Andhra Pradesh state and has an annual production capacity of 300,000 units and a workforce of about 3,000 people. It was invested for 1.1 billion US dollars. – The first model going into production was the Seltos small SUV. Seventy thousand units are planned to be sold in India and another 41,000 units are planned to be exported. – The plant’s second model the Carnival MPV went into production in February 2020. ・According to Kia’s midterm management reform plan released in January 2020, the number of locally-made models is planned to be increased to four and operation to be raised to full capacity by 2022.

・In May 2019, SAIC Group’s Indian subsidiary MG Motor India commenced operation in India. – In 2017, the company acquired GM’s plant in Halol, Gujarat state. The plant was upgraded to locally manufacture the MG brand. It has an annual production capacity of 80,000 units. Until June 2019, SAIC invested 22 billion Indian rupees in the former GM plant and in the preparation for manufacturing the MG Hector. – Following the MG Hector, the first model of the plant, the MG ZS EV went into production in December 2019.

・In April 2019, Suzuki began production of the Glanza for OEM supply to Toyota. – The Toyota Glanza, based on the Maruti Suzuki Baleno, was launched in June 2019. It is manufactured in Gujarat state,

・In January 2020, GM and Great Wall Motor announced the transfer of GM’s plant in Talegaon, Maharashtra state to Great Wall Motor. – The procedure is scheduled to be completed in 2020. – The Talegaon plant, GM’s second plant in India, went into operation in 2008 and has an annual production capacity of about 150,000 units. – After selling the Halol (first) plant to SAIC Group and pulling out the Indian market, GM continued to manufacture automobiles for export at the Talegaon (second) plant. However, with the disposal of the Talegaon plant, GM will completely withdraw from India. – Great Wall Motor will launch production and sales of vehicles in India with the acquisition of the Talegaon plant. The automaker plans to invest in the factory to transform it into its own plant and start production in 2021. Haval brand SUVs are planned to be manufactured in the first phase followed by BEVs in the future. Great Wall Motor is planning to invest 1 billion US dollars in stages in India, including establishing a production system, product development and investment in production of vehicles and parts (including powertrains for BEVs).