The use of LEDs for interior/cockpit lighting began in the early 1990s, and the number of LEDs installed per vehicle increased dramatically in the 2000s as OEMs started to adopt ambient lighting for interior. As the trend grew, however, OEMs have recognized an underlying issue of its calibration, which varies depending on suppliers and even their production sites.

The cost and effort to adjust the inconsistencies increases in proportion to the number of LEDs used. This has been one of the challenges when using a large number of LEDs for interior. To solve this, lighting engineers of BMW established an open alliance for automotive lighting solutions, called ISELED, with LED makers, cable/connector/harness manufacturers, and system controller suppliers in 2016. By the end of January 2020, 28 companies had joined to the alliance. The meat of ISELED is that any lighting system made by any supplier at anytime and anywhere will have the same, consistent color and brightness. This is because the driver IC (ISELED standard) is built into the module.

That is, only software adjustment in the production process is required when correction is needed; there is no need to change the resistance value and/or component parts unlike the conventional system. Besides, there are only two cables for two-way communication, and the package is relatively small. Although the official announcement has not been made yet, the first ISELED system installed product will be mass-produced in the spring of 2020. Also, it seems that BMW iNext released in 2021 will adopt the product for its interior lighting and will have 500 to 600 ISELED-compatible LED modules per vehicle. It is likely that Dominant, a member of ISELED, will produce the LED modules, and Valeo will incorporate them into instrument panels and center consoles.

VW and Daimler seem to be interested in establishing an alliance like ISELED to develop integrated LED systems. This trend is expected to accelerate the interior LED systemization and increase the precision of the LEDs in color tone and brightness adjustment.

ISELED on BMW iNext, Released in 2021

・An RGB LED is a combination of three (red, green, and blue) LEDs in just one package. Compared to conventional single-color LEDs, RGB LEDs have more variety of colors and gradients and its full color conversion is easier. ・Since the mid-2010s, RGB LEDs have been used as ambient lighting for automotive cockpits. 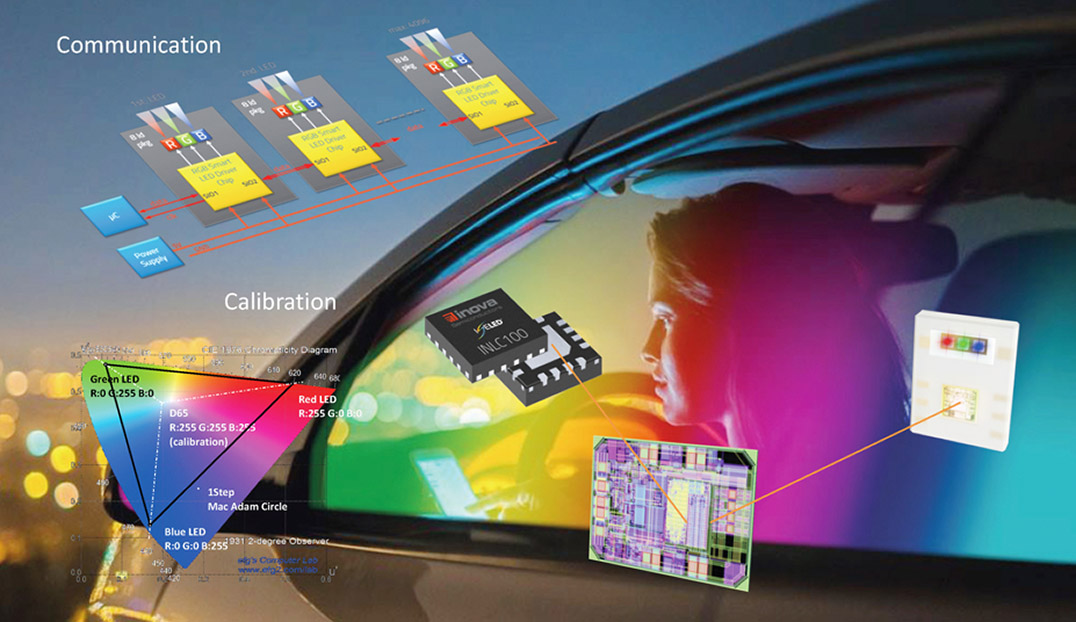 ・ISELED Alliance was announced on November 8th, 2016 in Munich. It is an open alliance to develop integrated RGB LED system solutions for automotive lighting. - Led by BMW, Dominant Opto Technologies (Malaysia, in charge of LEDs), NXP Semiconductors (Netherlands, in charge of system controllers), TE Connectivity (Switzerland, in charge of cables, connectors, harnesses), and Pforzheim University of Applied Sciences (Germany, in charge of optical measurement system) founded the alliance in Munich, Germany. - Since then, ISELED Alliance has reached 28 members. - The name of ISELED is derived from the last name of Engineer Robert Isele, a BMW engineer who led the creation and policy making of this alliance.

・The first mass production of the ISELED system is scheduled in the spring of 2020. It will be installed on BMW iNext (codename i20) which is planned to be released in 2021. - An ISELED member Dominant will produce ISELED modules, and another member Valeo (France) will incorporate the modules into interiors such as instrument panels and supply them to BMW. - 500 to 600 modules will be used as interior lighting per vehicle. ・The Alliance is aiming to supply the module not only to BMW but also to other OEMs. BMW encourages its members to promote the ISELED modules to other OEMs. - The aim is to increase the number of production and reduce the unit price. - Dominant ships samples of the ISELED module to suppliers in Japan, such as Alps Electric and Toyodenso. Through these supplier, Japanese OEMs may possibly adopt this new module for their interior lighting. ・VW and Daimler seem to be considering establishing their own LED system development alliances. ・The new integrated RGB LED system can easily upgrade the interior lighting, luxurious and high-performance. It is possible that other OEMs will form similar alliances for the same purpose.