Success of NAP 2020 in Malaysia Depends on Bylaws and Incentives 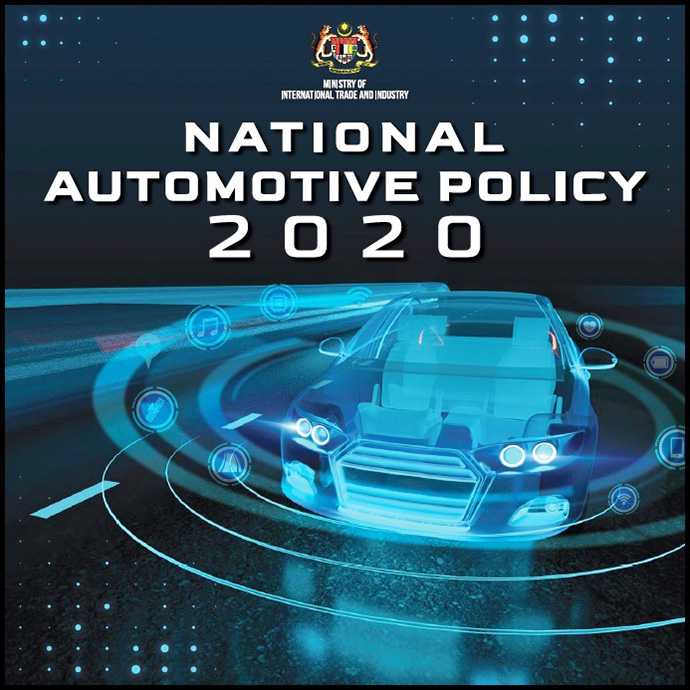 In February 2020, Malaysia launched the National Automotive Policy 2020 (NAP 2020), which is an enhancement of NAP 2014. The review has been done for the first time in 6 years since 2014, and this is the third revision since the first NAP formulated. NAP 2020 added three new key objectives to the existing framework, including Energy Efficient Vehicles (EEVs) and preferential treatments: Next Generation Vehicles (NxGVs), Mobility as a Service (MaaS), and Industrial Revolution (IR 4.0). Yet, the definition of NxGVs will not be determined until 2021, and there are no specific provisions about investment incentives. The content of NAP 2020 at the time of announcement is merely a long-term vision, thus the formulation of bylaws and distribution of incentives will be critical in order to realize industry promotion.

While the earlier NAPs were 4-5 year plans, NAP 2020 is a distinctive 10-year roadmap covering from 2020 to 2030. NAP 2020 includes an implementation schedule of electrification, connected and autonomous driving technologies and targets for 2030. As for vehicle manufacturing and sales, the target for 2030 is set at 1.47 million unit production and 1.22 million unit sales. The 2019 unit production was 571,000 and the sales were 604,000, which is less than half of the 2030 target. The number of vehicles per 1,000 people in Malaysia has already reached the highest level among the major ASEAN countries, around 480 in 2019, and it is difficult to predict that the demand for new vehicles will double. Rather, it should be considered an ambitious target of the government to expand the automotive industry.

As mentioned earlier, some of the crucial bylaws of NAP 2020 are the revision of the EEV fuel economy standard and the formulation of the definition of NxGVs. EEV was introduced in NAP 2014 and is targeting passenger cars and motorcycles with a displacement of 250cc or less. According to Malaysia Automotive, Robotics & IoT Institute (MARii), 103 models and 298 variants of passenger cars were EEV certified as of 2019. In terms of unit sales, 532,000 vehicles, which accounted for 87.6% of total vehicle sales, were counted as EEVs. There are standards set for EEVs based on kerb weight for passenger cars and on displacement for motorcycles, but the revision of them is scheduled in the future. Also, NAP 2020 includes setting standards for commercial vehicles and motorcycles with more than 250cc displacement. Regarding NxGV, there is no specific definition of NxGV set but again, it will be determined around 2021. Other highlights of NAP 2020 include the implementation schedule for gasoline and diesel regulations: Euro 5 will be applied to diesel in September 2020 and gasoline in September 2025. Also, the implementation of B30, which is a 30% biodiesel mixed fuel, is scheduled by 2025.

NAP 2020 was announced on February 21, 2020 by the former prime minister Mahathir bin Mohamad, who had been actively leading Malaysian national car projects. However, Mahathir announced his resignation on February 26. Besides, on the 29th, the former Prime Minister Muhyiddin was elected as the new prime minister, not Mahathir's successor. Although Mr. Mahathir is no longer in direct charge, he may play an important role in this industrial development that NAP 2020 aims for as he did in the past.

・Policy Name:National Automotive Policy 2020(NAP 2020) ・Competent Ministry: Ministry of International Trade and Industry (MITI) - Malaysia Automotive, Robotics & IoT Institute (MARii), an affiliated organization under the MITI, has participated in policy formulation. ・Date of Announcement: February 21, 2020 - The content review was done for the first time in 6 years since 2014 (NAP 2014). - The formulation was started in early 2018 aiming to announce it in 2019 at the latest. Due to some adjustments, it was finally announced in February 2020. ・Target Period: 10 years (until 2030) - NAP was originally designed as a medium-term plan (4-5 years), but NAP 2020 is set as a 10-year plan.

・NAP 2020 keeps 7 objectives from NAP 2014 as continuous targets and establishes 5 new objectives, making a total of 12 objectives. [Continuing Targets from NAP 2014] 1 Develop a competitive and capable domestic automotive industry 2 Develop Malaysia as the regional automotive hub in Energy Efficient Vehicle (EEV) 3 Increase value-added activities in a sustainable way while continuously developing domestic capabilities 4 Increase exports of vehicles, automotive components, spare parts and related products in the manufacturing and aftermarket sector 5 Increase the participation of competitive Bumiputera companies in the domestic automotive industry, including in the aftermarket sector 6 Enhance the ecosystem of the manufacturing and aftermarket sector of the domestic automotive industry 7 Safeguard consumer interests by offering safer and better-quality products at competitive price [New Targets Added to NAP 2020] 1 Develop the Next Generation Vehicle (NxGV) technology ecosystem to make Malaysia as a Regional Hub for the production of NxGV 2 Expand the participation of domestic automotive industry in the sector of Mobility as a Service (MaaS) which not only focuses on the development of technology, but also the overall transportation ecosystem 3 Ensure the domestic automotive industry is better equipped with new paradigm in the automotive sector closely related to the development of Industry 4.0 (IR4.0). 4 Ensure the overall ecosystem including consumers, domestic industry and the Government receive maximum benefit from the spin off from the overall implementation of NxGV 5 Reduce carbon emission from vehicles by improving fuel economy level in Malaysia by 2025 in line with the ASEAN Fuel Economy Roadmap of 5.3l/100km

・NAP 2020 will have enhancement in the development of critical components and systems for technology and engineering of EEV, NxGV, MaaS and IR 4.0. [EEV] ・EEV is an energy efficient vehicle defined in NAP 2014, which is eligible for incentive opportunities. EEV is classified into categories based on its class and each has a fuel economy standard (l/100km). EEVs subject to this are passenger cars and 250cc or less motorcycles. Passenger cars are classified by kerb weight and motorcycles by displacement. ・In NAP 2020, commercial vehicles whose kerb weight is over 2.5t and motorcycles that have more than 250cc displacement will be also defined in addition to the aforementioned EEVs. -These definitions will be developed by 2021. [NxGV] ・NxGV is defined as a vehicle that meets the requirements of EEV and has advanced driving capabilities (Leve 3 or above) with advanced mobility applications. -The NxGV standard will be formulated by 2021.

・NAP 2020 established a framework for automotive fuels, including gasoline/diesel regulations and a mandatory implementation schedule of biodiesel. [Gasoline/Diesel Fuel Regulation] ・On September 1, 2020, the Malaysian government will apply Euro 5 to diesel fuels. ・From September 1, 2025, the government will apply Euro 5 to gasoline fuels. - Euro4M (Malaysian emission standards similar to Euro 4) has been effective for RON97 since September 1, 2015 and for RON95 since January 1, 2020. [Biofuel Implementation Plan] ・In 2020, B20(20% biodiesel mixed fuel) will be implemented. -Malaysia implemented B5 in 2011, B7 in December 2014, and B10 in February 2019. ・Implementation of B30 is scheduled in 2025 or earlier.

・NAP 2020 offers incentives to investments related to EEV, NxGV, critical automotive components, and the testing centre. ・The amount of incentives is not specified; each will be determined through negotiations with the government, which is called the Customized Incentives system. ・The criteria for Customised Incentives are indicated in the chart. The list of Critical Component is also shown in 【Critical Component Development in NAP 2020】. 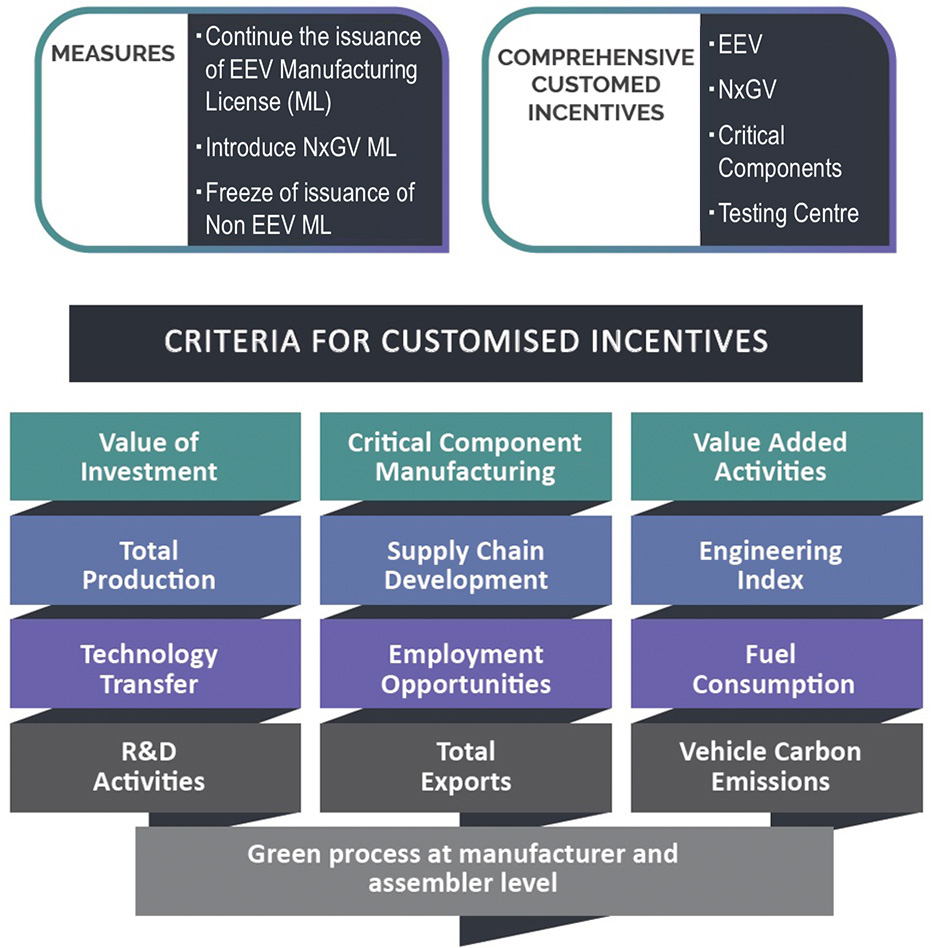