Nissan Motor’s automobile production volume in China declined 0.4% year-on-year in 2019 to 1.34 million units. Despite the slight drop, production exceeded 1.3 million units for the second consecutive year (company announcement). Production in China accounted for over 30% of Nissan’s global production in 2019, increasing over 8.0pp in the past years. In 2019, China’s passenger vehicle market decreased 9.6% (FOURIN’s research), falling for the second consecutive year. Despite the difficult market environment, Nissan’s rate of decline was minimal. Although the Venucia joint venture brand of Dongfeng Motor and Nissan dropped 18.7% in 2019, Dongfeng Nissan, which handles the Nissan brand in China, declined a mere 3.0%.

Looking at results by manufacturer, Dongfeng Nissan’s production increased 3.0% to 1.18 million units in 2019. In the passenger car segment, the new Sylphy, Nissan’s best-selling model in China, went up 32.2% to 433,000 units. The Lannia and the Tiida hatchback also showed solid performance, going up over 40% and over 30% respectively. In the SUV segment, all Nissan models did better compared to the previous year. In contrast, Dongfeng Venucia dropped 18.7% to 109,000 units, declining for the second consecutive year. Although the Venucia D60 went up 10.8% to 73,000 units and the Venucia T60 increased twofold to 13,000 units, other Venucia models declined. Dongfeng Infiniti fell 2.2% to 32,000 units. Solid sales of the Infiniti QX50 could not make up for the sharp decline of the Q50L. Zhengzhou Nissan, which has two Nissan models on the market, nosedived 54.7% to 11,000 units due to significant drop of the NV200 and Terra.

In China, from late January to mid-February 2020, all plants shut down due to the outbreak of the new coronavirus. As a result, Nissan’s production in the first four months of the year dropped 42.1% to 235,000 units. By mid-March, all of Nissan’s plants have been in operation, and the automaker began to increase operating rate from May. 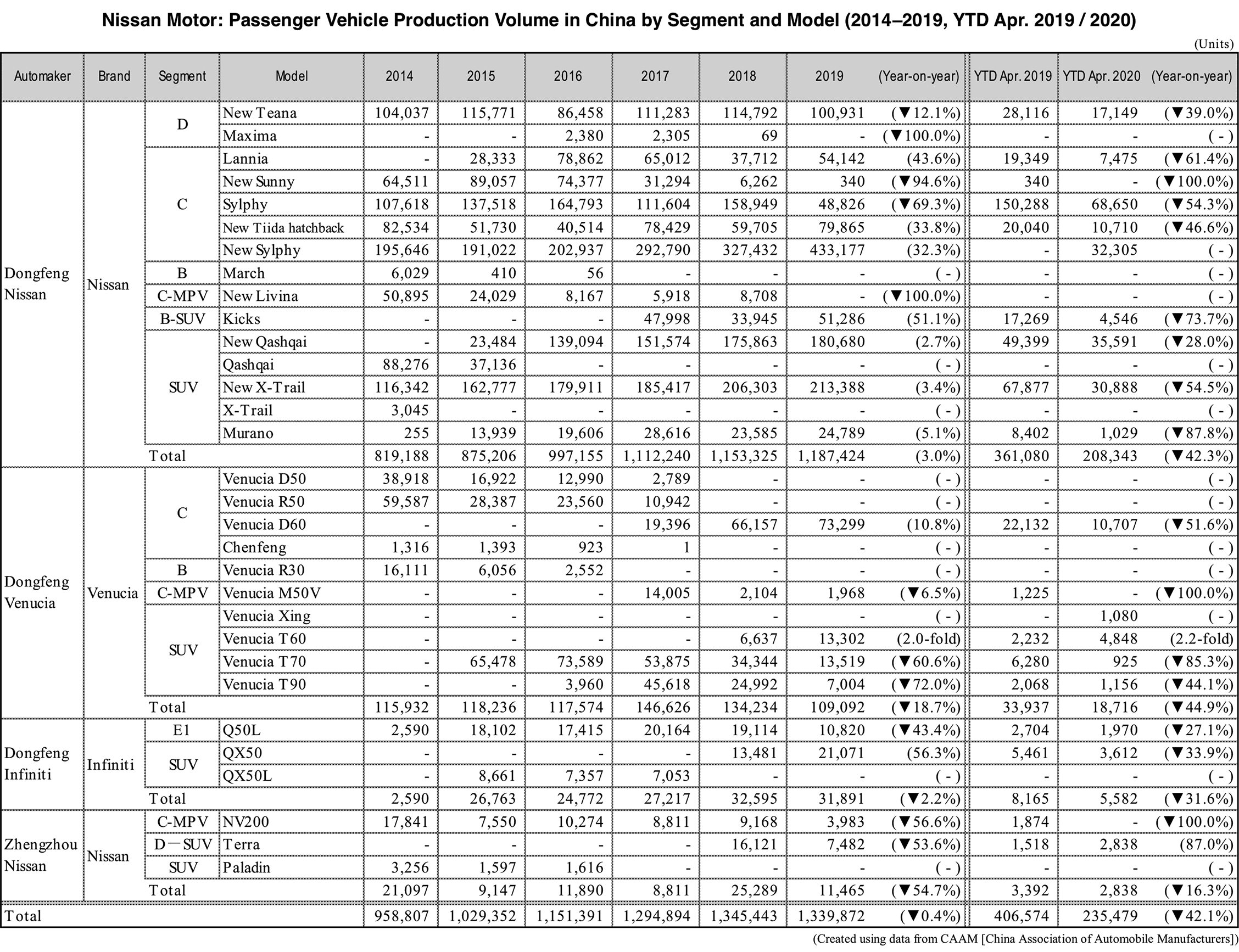