In India, public buses have begun to be replaced by electric models, a trend which is supported by the government. Government of India is assisting in purchasing about 7,000 BEV buses for public transportation in the second phase of FAME India, a plan to accelerate the spread of electric vehicles and promote their production, for the three years from April 2019 to March 2022. The allocation of subsidies for about 5,600 vehicles was decided in August 2019. Competition for orders has begun, with two major Chinese bus companies, BYD and Beiqi Foton, joining major local bus manufacturers such as Tata Motors and Ashok Leyland. The projection is that public buses will be significantly replaced with BEV models in the next few years.

In the first phase of FAME India, only 425 BEV buses were eligible for subsidies during the four-year period from April 2015 to March 2019. In the second phase, 7,090 units are planned to be subsidized in three years. In line with this plan, the Indian government has allocated a budget of 35.45 billion Indian rupees, equivalent to approximately 35% of the total budget of 100 billion Indian rupees of the second phase of FAME India, to subsidies for purchasing BEV buses. By narrowing down subsidies only to public buses with fixed service routes, India aims to minimize the problems surrounding cruising distance and charging infrastructure in an effort to promote smooth transition to BEV buses.

In August 2019, 5,595 units, or 70% of the 7,090 BEV buses to be subsidized, were allocated to public transport companies in a total of 64 cities in 22 states and federal territories. Of these, 5,095 units will be used for urban transport, 400 units for intercity transport and 100 units for last-mile transport by the Delhi Metro Railroad Corporation (DMRC). The largest number of BEV buses will be subsidized in Maharashtra state.

Heading toward the electrification of public buses, Tata Motors, Ashok Leyland, VECV (Eicher Motors), BYD, Beiqi Foton and others began to compete for orders in the BEV bus market.

Tata Motors has received about 60% of the orders for subsidized BEV buses in the first phase of FAME India, and the company also keen to win orders in several states in the second phase. In December 2019, the company announced that it has won orders for more than 2,300 BEV buses from seven transportation companies in five states in India.

In January 2020, Ashok Leyland announced a partnership with ABB Power Products and Systems India, an affiliate of Swiss engineering giant ABB, to enhance its BEV bus product capabilities. In the future, the company plans to jointly develop an BEV bus equipped with ABB's rapid charging system.

BYD has partnered with local Olectra Greentech to produce and sell BEV buses under the Olectra BYD brand name. The company is considered second only to Tata Motors in BEV bus deliveries in India. Olectra BYD BEV buses are operated in several states.

Beiqi Foton manufactures and sells buses including EVs under the Foton PMI brand name in India by licensing a local bus assembly manufacturer PMI Electro Mobility Solutions (PEMS). To strengthen its production system, the company announced in December 2019 that it will establish a new joint venture company with PEMS to manufacture BEV buses with an annual production capacity of 6,000 units in Pune, Maharashtra state.

・In March 2019, India’s Ministry of Heavy Industries and Public Enterprises announced the second phase of FAME India scheme which is intended to production and market penetration of electric vehicles. The application of the program started in April 2019. – FAME India is a scheme that stipulates subsidies for purchasing various electric vehicles and government support for the development of charging infrastructure. The first phase was implemented between April 2015 and March 2019. – The second phase is implemented between April 2019 and March 2022. [Overview of the BEV Bus Purchase Subsidy System] ・Budget for purchase subsidy payment: 35.45 billion Indian rupees. – The total budget of the second phase of FAME India is 100 billion Indian rupees, of which 35% of the total will be allocated to subsidies for BEV bus purchases. ・Purchasing subsidy per BEV bus: 20,000 Indian rupees per 1 kWh of battery capacity. – As an example, in the case of a BEV bus with a battery capacity of 250 kWh, the purchase subsidy per vehicle is 20,000 Indian rupees x 250, which is 5 million Indian rupees. – However, the upper limit is 40% of the vehicle price. ・Number of vehicles for which purchase subsidies allocated: 7,090 units. ・Conditions for eligibility: ◇The vehicle must be operated for public transportation (Private company commuter buses, school buses for school use, airport shuttle buses, etc. are excluded.), ◇Vehicles priced (based on factory shipment value) 20 million Indian rupees or less, ◇Being a domestically produced car, domestically produced designated parts such as batteries according to a prescribed schedule, etc.

・In August 2019, India’s Ministry of Heavy Industries and Public Enterprises announced its decision to allocate purchase subsidies for 5,595 BEV buses under the second phase of FAME India program. – With this announcement, the purchase subsidies of about 80% of the 7,090 units of BEV buses were determined. ・BEV buses were distributed to 64 cities in 22 states and federal territories. – Prior to the decision on the number of vehicles to be allocated, a total of 86 applications (14,988 units) were submitted from 26 states and federal territories. ・Out of the 5,595 BEV buses, 5,095 units are intended to be used to urban transportation, 100 units for interurban transportation and 400 units for last-mile transportation by the Delhi Metro Rail Corporation. ・The subsidized 5,595 BEV buses are assumed to have a total mileage of 4 billion km during the period indicated in the introduction plan. This is expected to reduce fuel consumption by 1.2 billion liters and CO2 emissions by 2.6 million tons. 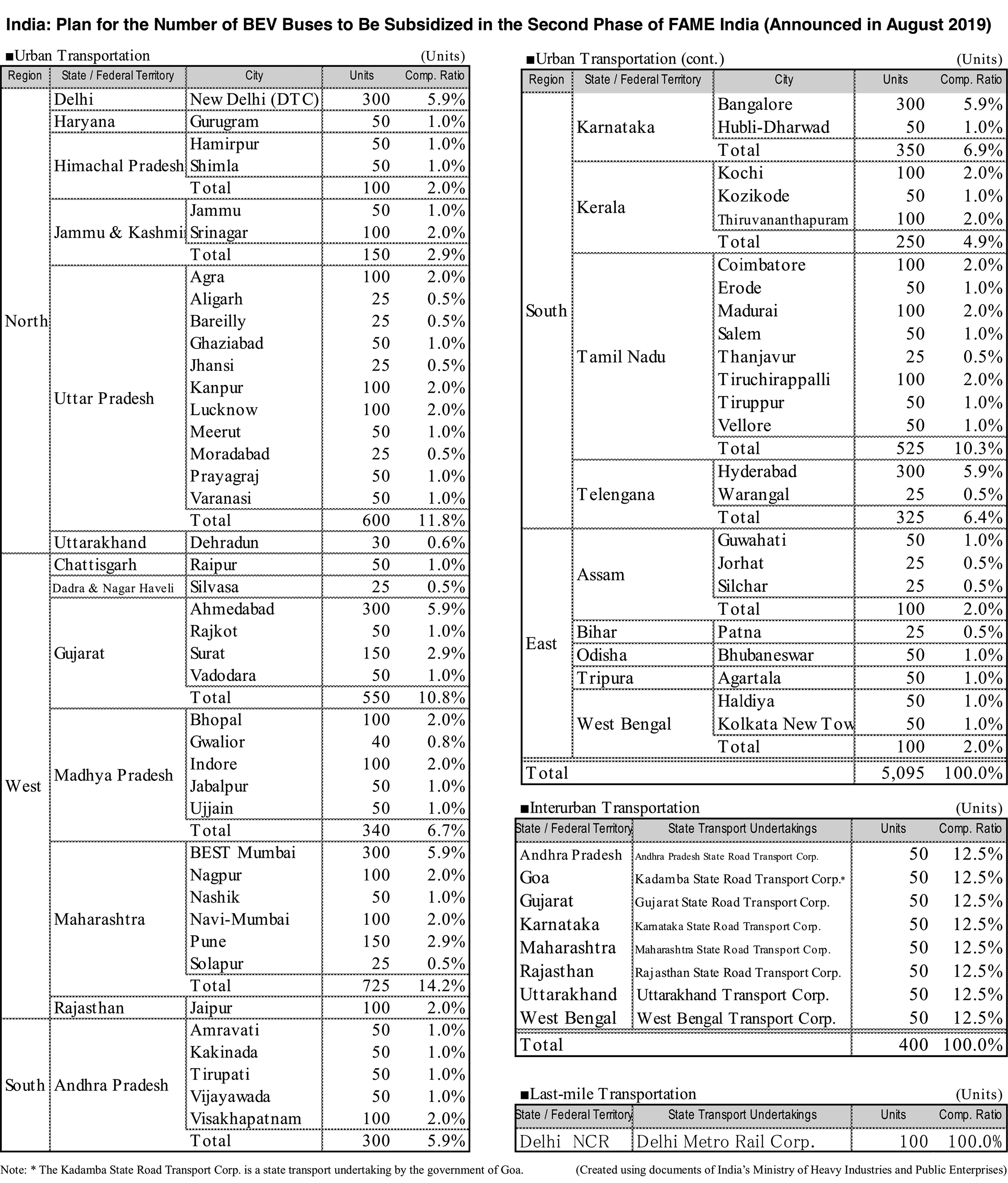 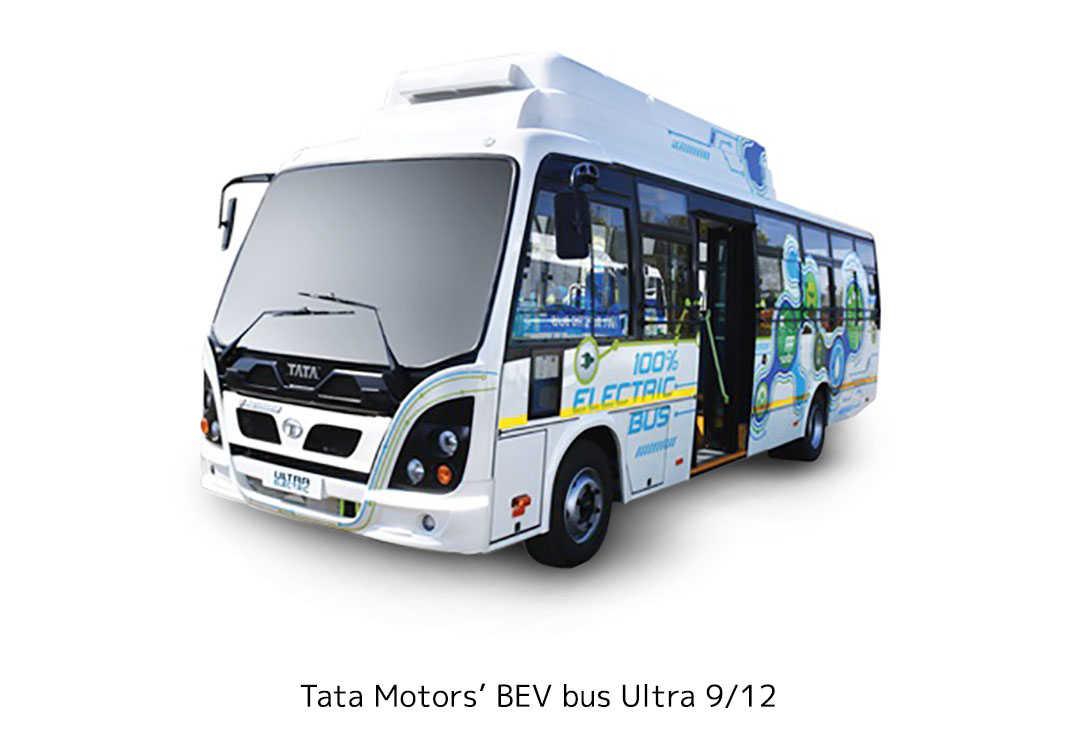 ・From February to July 2019, the company delivered some of the BEV buses ordered in the first phase of FAME India. – In February 2019, the delivery of 40 BEV buses to Lucknow began. – In February 2019, the delivery of 80 BEV buses to West Bengal began. – In July 2019, the delivery of 40 BEV buses to Jammu & Kashmir began. ・In October 2019, the company won an order for 300 BEV buses from Ahmedabad Janmarg Ltd. (AJL) which operates a bus rapid transit system (BRTS) in Ahmedabad, Gujarat state. – The delivery model is the Urban 9/9 Electric AC Bus. It is scheduled to run on the Ahmedabad BRTS corridor. – Tata Motors will also supply the necessary infrastructure such as quick charging stations needed to introduce BEV bus operations. ・In December 2019, the company announced that it has received orders for more than 2,300 BEV buses from seven transportation companies in five states in India. Orders came from the following states: Rajasthan (RSRTC), Karnataka (KSRTC, BMTC, NWKRTC), Uttar Pradesh (UPSRTC), Tamil Nadu (IRT) and Andhra Pradesh (APSRTC).
Please log in or subscribe to AAA weekly to view the rest of this report.
Free trial subscriptions are available!