Commercial vehicle manufacturers are planning to commercialize vehicles equipped with self-driving technology in the 2020s. The pace of realization is already picking up in 2020. Regarding electrification which companies are focusing on alongside autonomous driving technology, Mitsubishi Fuso will not launch mass-produced models but will advance its production system instead. Meanwhile, competition for new technology development is intensifying so the burden of R&D expenses is increasing. For this reason, partnerships are being pursued to share costs and increase efficiency. Isuzu announced in December 2019 that it will form a business alliance with Volvo. It is expected that commercial vehicle manufacturers, especially those promoting CASE, will become more active.

To date, commercial vehicle companies have participated in demonstration tests of platooning on expressways. In addition, Isuzu and Hino have formed a partnership to jointly manufacture buses. Recently, Isuzu and Hino have also participated in corporate alliances related to BEVs and MaaS, led by Toyota. It appears that this trend will accelerate. As for autonomous driving, companies aim to achieve Level 4 in the mid-2020s. Mitsubishi Fuso and UD Trucks will use Daimler and Volvo’s technology respectively. It is also highly likely that Isuzu will use the technology of its partner Volvo in the future. 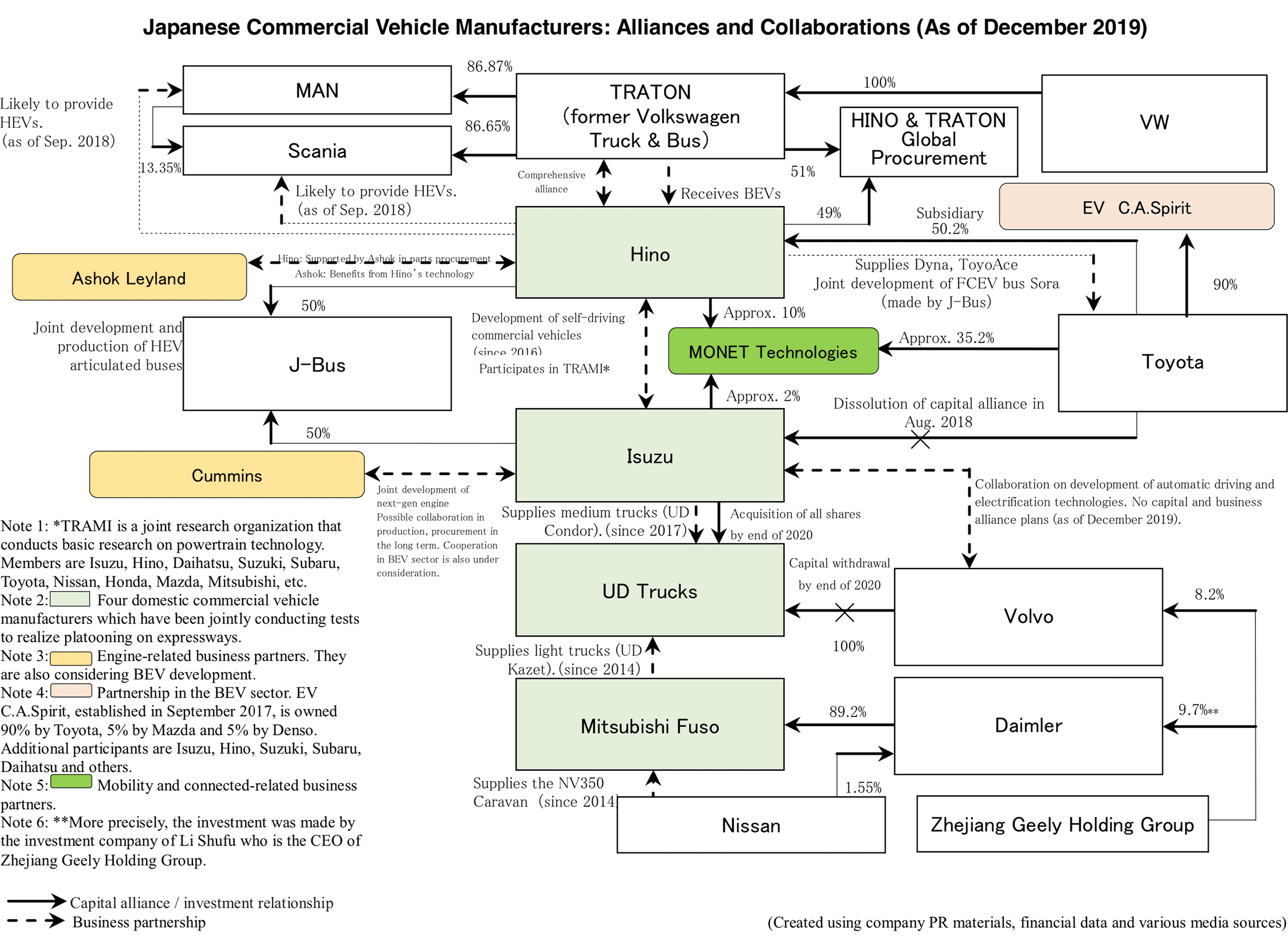 Looking at electrification, the Mitsubishi Fuso is building a production system in preparation for the general sale of eCanter in 2021. Mitsubishi Fuso intends to establish a production system that can efficiently mix electric vehicles and vehicles with internal combustion engines. The company is also developing FCEV trucks, considering that there is also demand for FCEV trucks due to cruising range issues of other types of vehicles. In February 2019, Isuzu pilot launched the ELF EV to monitor the BEV markets. However, the electrification of pickup trucks will not be implemented for the time being. However, there is a possibility that progress will be made in the future through the alliance with Volvo, which is a leading automaker in electrification. UD Trucks aims to mass-produce fully electric trucks by 2030. As for autonomous driving, companies are aiming to achieve Level 4 in the mid-2020s, as it is necessary to respond to driver shortage. Efforts are being made to reduce the burden on drivers including the automation of cargo handling.

・In May 2018, Isuzu announced a new medium-term management plan for the period from fiscal 2018 to 2020. – The company aims to advance existing businesses and upgrade them for the next generation. : Profitability of core businesses is intended to be increased. These include business innovation through collaborative creation activities, expansion of overseas commercial vehicle business, enhancement of LCV business, and reinforcement of powertrain business. : Evolving toward the next generation includes accelerating the development of advanced technologies, promoting digital innovation and creating new businesses.

・At the Tochigi Plant’s third factory (Tochigi prefecture, Japan) which started operation in March 2018 and produces engines, a system has been adopted which collects information such as machine operation status on a server. At the assembly line, radio frequency identification (RFID) is attached to the workers’ helmets to collect human movement data which is used to improve the placement of people. These technologies are intended to be introduced at other factories as well. – The application will be expanded to the powertrain line at the Fujisawa Plant (Kanagawa prefecture, Japan). ・As of July 2019, testing of unmanned automated lines manufacturing powertrains was underway at the Tochigi and Fujisawa plants. – Unmanned lines operate for two hours. – Unmanned operation time is planned to be extended and unmanned automated lines are likely to be introduced at other plants as well. Unmanned operation is intended to address the shortage of human resources. ・As of September 2019, Isuzu was engaged in strengthening model-based development which is scheduled to be completed by the fiscal year ending March 2020. The company plans to upgrade related equipment used in model-based development to reduce the development process. – Isuzu is introducing high-performance computers and upgrading software through equipment improvement.

・In May 2019, the company launched an articulated HEV bus jointly developed with and Hino in preparation for an increase in transportation demand during the 2020 Tokyo Olympics and Paralympics. – The bus is sold by both companies under the names Isuzu Erga Duo and Hino Blue Ribbon City Hybrid. It is the first articulated HEV bus on the Japanese market. – A clutch is placed between the diesel engine and the motor to increase energy regeneration efficiency and enable starting only with the motor. – As a fixed-route bus, it is equipped with the world’s first emergency driving stop system (EDSS). – It is also fitted with ITS technology dedicated to articulated buses which are expected to be used for advanced rapid transit (ART). : It consists of platform arrival control, cooperative inter-vehicle distance maintenance support system, collision warning, road-to-vehicle communication, vehicle-to-vehicle communication and a vision support camera system. – The bus is about 18m long, 2.5m wide, 3.3m high and has a seating capacity of 120 people. It has a small turning radius that matches the road conditions in Japan. Many domestic parts are used which makes its maintenance easy. – It is manufactured by J-Bus’s Utsunomiya Plant (Tochigi prefecture, Japan). A system capable of producing 17 vehicles a year has been established.

・From 2020 onwards, the company plans to share the basic design of diesel engines with US engine manufacturer Cummins in the short term to improve development efficiency and enhance cost competitiveness. – Isuzu and Cummins will jointly develop diesel engines including HEV systems. The architecture is planned to be standardized and used by both companies. – In the long term, Isuzu is considering cooperation in the areas of development, production and procurement of other powertrains as well. Cooperation in the BEV sector is also under consideration. – Isuzu signed a memorandum of understanding with Cummins in September 2018 to seek a partnership for next-generation powertrain business. In May 2019, the two companies signed a comprehensive powertrain partnership (Isuzu Cummins Powertrain Partnership). – A dedicated organization made up of experts in powertrain development, procurement and production and an alliance board consisting of executives of both companies are set up in an effort to advance cooperation. – The collaboration is expected to reduce burden on development resources and take advantage of economies of scale in purchasing. ・In December 2019, Isuzu announced a partnership with Volvo and the acquisition of Volvo’s subsidiary UD Trucks. It is projected that cooperation in the area of advanced technology will shift into a higher gear from 2020 onwards. – The two companies plan to establish a technical cooperation system for advanced technologies (electrification, automatic driving, etc.). : The alliance is expected to reduce costs, reduce burden on development and increase efficiency. Shared development cost is expected to enable Isuzu the early commercialization of new technologies. – Isuzu will strengthen heavy truck business in overseas markets. As part of this, the company will acquire all shares of UD Trucks and the overseas business of the brand. : Isuzu will continue the business and the brand of UD Trucks. The company is not considering restructuring UD Trucks’ production bases. : In the future, the company will consolidate products as much as possible and aim to increase sales of large vehicles, which is a weak product area of Isuzu. – In the future, Isuzu is also considering wide-ranging collaboration with Volvo on used trucks.

・In December 2019, the company announced that it will relocate its head office from Omori Bellport (Tokyo, Japan) to Yokohama Gate Tower (Yokohama, Japan). – Isuzu will create an environment where employees can work easily and also an IT environment. In addition, the company will aim to increase operational efficiency and strengthen cooperation between groups by moving the headquarters closer to the Fujisawa Plant. (Created using Isuzu Motors’ PR materials and various media sources) 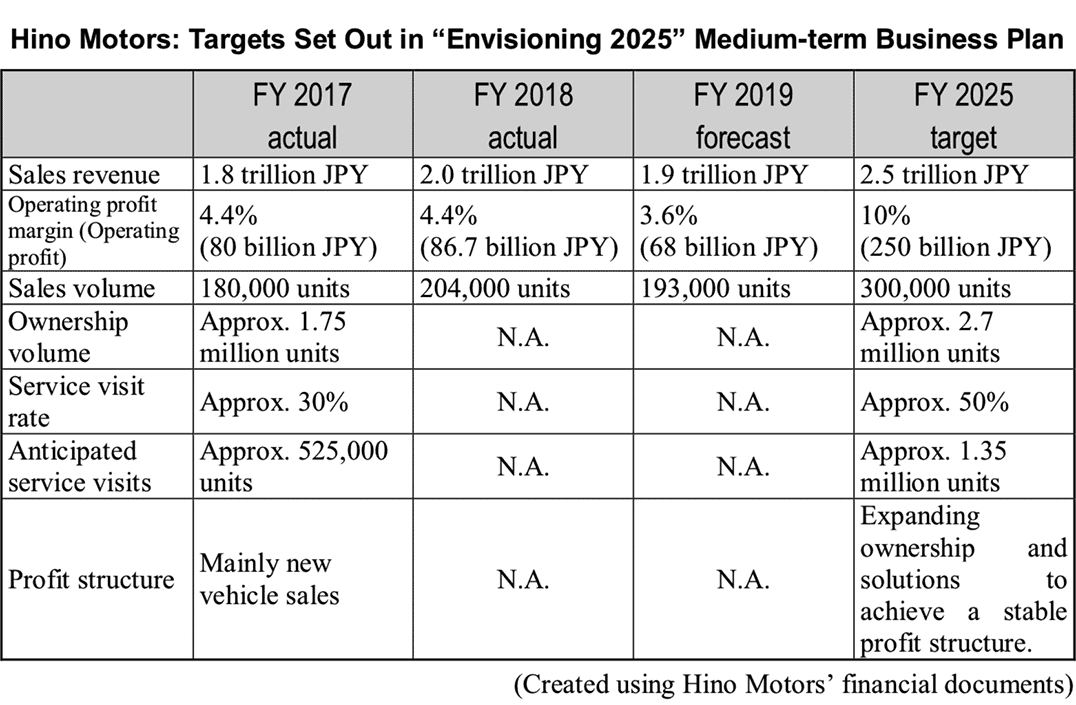