In November 2021, the fully-redesigned Daihatsu Xenia and Toyota Avanza were launched in Indonesia, entering their third-generation. Both vehicles have become core models of Daihatsu and Toyota in Indonesia since they were launched at the end of 2003 and early 2004, respectively. The two vehicles, jointly developed by Daihatsu and Toyota, are sister models. Starting from the current generation, the two models are built on the DNGA (Daihatsu New Global Architecture) platform. In addition, their drive system has been switched from FR-layout to FF-layout and now both have a CVT version. In addition, the Avanza's high-end model Avanza Veloz, which was introduced with the launch of the second generation in 2011, became an independent model under the name Veloz. It has been developed as a “premium cross MPV” with a crossover-like appearance.

Full model change of the Xenia, Avanza and Veloz

・In November 2021, the fully remodeled Daihatsu Xenia, Toyota Avanza and Toyota Veloz was launched. - The Xenia and Avanza are three-row, seven-seater MPVs that are sister models, while the Veloz is the high-end version of the Avanza. All three models have undergone full-model change at the same time. ・The new Xenia and Avanza are the third generation of both models. - The first generation was jointly developed by Toyota and Daihatsu as a compact vehicle project, U-IMV (Under-IMV), of Toyota's IMV series (Hilux, Fortuner, Innova) which consist of models intended exclusively for emerging markets. The Xenia was released in December 2003, followed by the Avanza in January 2004. - The second generation went on sale in November 2011. Simultaneously, the Avanza Veloz was introduced as the Avanza’s high-end version. - Cumulative sales of the Xenia and Avanza (including the Veloz) as of November 2021 were 683,000 units and 1.8 million units respectively (announced by Daihatsu and Toyota). ・The Avanza Veloz was renamed to Veloz starting from the third generation. Previously it was positioned as the high-end grade of the Avanza, but from the third generation it has become an independent model. - Starting from the third generation, production of the Veloz was transferred from Astra Daihatsu Motor (OEM supply to Toyota) to Toyota Motor Manufacturing Indonesia (in-house production).

Main improvements of the new Xenia, Avanza and Veloz

・All three models have adopted Daihatsu’s new DNGA (Daihatsu New Global Architecture) platform. - The first DNGA-based model pair which have been manufactured and sold in Indonesia are the Daihatsu Rocky and Toyota Raize sister models. - The Xenia, Avanza and Veloz are the first B-segment models which are built on the DNGA platform. ・By adopting the DNGA platform, the drive system has been changed from FR to FF layout. - The suspension has been replaced as well. They use MacPherson struts at the front and a torsion beam at rear (previously a live axle). ・The length of the three models has been extended from around 4,200 mm to 4,400-4,500 mm. As a result, interior length increased 160 mm. 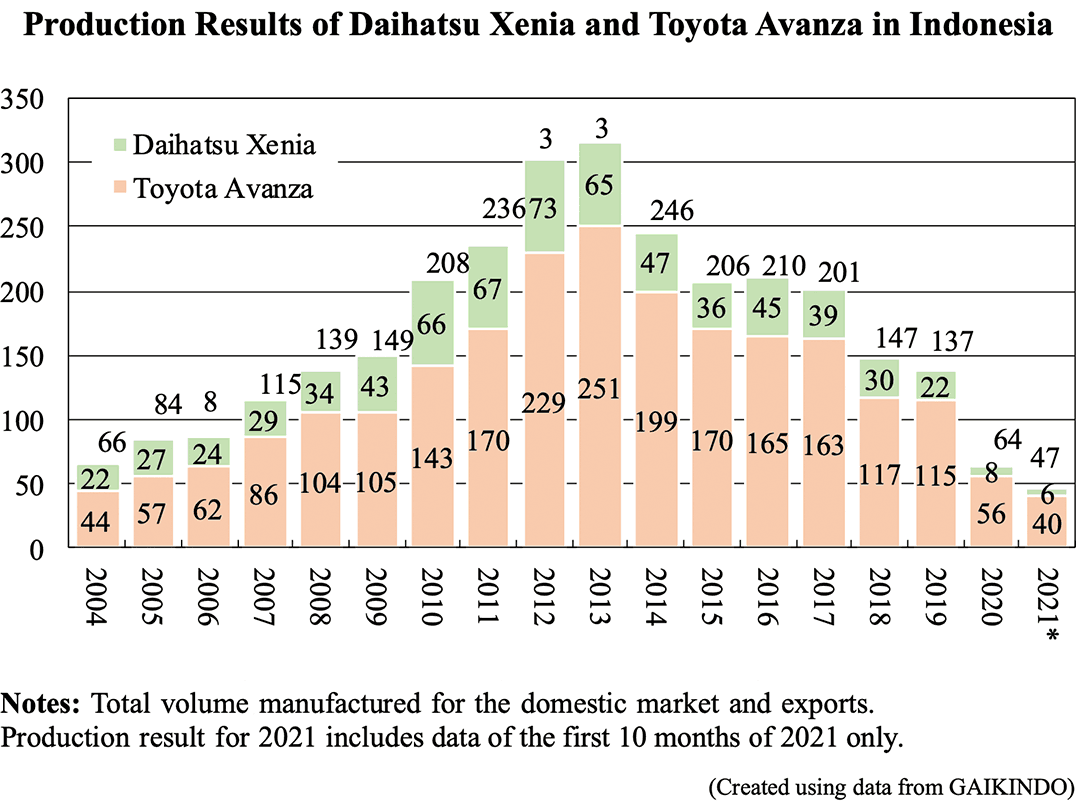 ・The engines remained the same using the 1.3L 1NR-VE and 1.5L 2NR-VE gasoline engines. However, performance has been improved, raising both output and torque compared to the previous generation. ・The 5-speed MT of the previous generation is continued to be used but the 4- speed AT has been replaced by a D-CVT. ・As for safety equipment, ABS with EBD is standard equipment on all three models, while other equipment is optimized according to model and/or grade. - Vehicle stability control (VSC), hill start assist (HSA) and brake assist (BA) are standard equipment on the Avanza and Veloz. On the other hand, only the top grades of the Xenia feature these technologies. - The high-end version of the Xenia is equipped with Daihatsu’s Advanced Safety Assist, while the top-grades of the Avanza and Veloz models feature Toyota Safety Sense. All models are equipped with rear cross traffic alert (RCTA), blind spot monitor (BSM), pre-crash safety (PCS), pedal mis-operation control (PMC), lane departure warning (LDW) and front departure alert (FDA).
Please log in or subscribe to AAA weekly to view the rest of this report.
Free trial subscriptions are available!