India’s automobile sales in 2020 fell 23.0% year-on-year to 2.94 million units. The impact of the nationwide lockdown implemented by the government in late March 2020 as a countermeasure against COVID-19 was significant, sales falling below 3 million units for the first time in 11 years since 2009. In India, the automobile market has been shrinking since the latter half of 2018, even before the pandemic, due to the slowdown of economic growth and the rise in vehicle prices pushed up by tightened automobile-related regulations. These factors and the outbreak of COVID-19 caused a double-digit decline for the second consecutive year.

However, in the latter half of 2020, automobile sales began to recover. Vehicle sales fell sharply, going down 80%, in the April-June period of 2020, when the lockdown was implemented, but then increased 9% in the July-September period and 11% in October-December period. 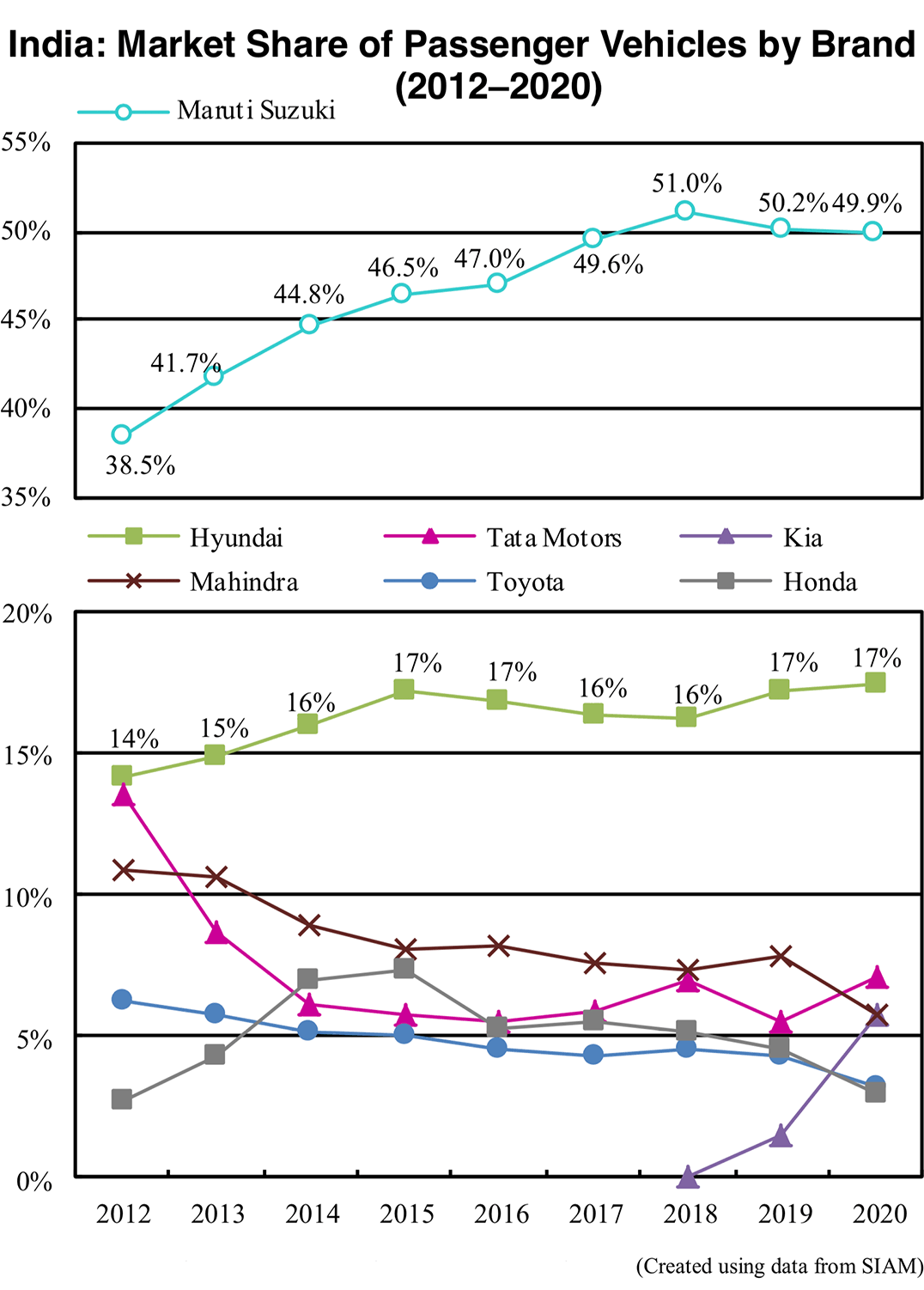 ・On March 25, 2020, the Indian government issued a lockdown measure that effectively banned people from going out throughout the country. As a result, the production and sales of automobiles were completely banned until early May, when lockdown was eased. ・Due to the lockdown, India's sales volume in April 2020 was 0, and it decreased 80% during the April to June period.

Impact of the introduction of BS6 emission regulations

Looking at the number of sold in 2020 by vehicle type, passenger vehicles decreased 17.9% to 2.43 million units. Of which passenger cars (sedans, hatchbacks) fell 21.3% to 1.43 million units and utility vehicles (SUVs, MPVs) declined 8.9% to 897,000 units. Sales of SUVs, remained strong thanks to the continued introduction of new models preventing the utility vehicle market to sharply decline. The top three models in the utility vehicle segment were the Hyundai Creta, fully-redesigned version entered the market in March 2020, the Kia Seltos, launched in August 2019, and the Maruti Suzuki Vitara Brezza which topped the market from 2017 to 2019. Commercial vehicles decreased 40.9% to 505,000 units, seeing a significantly larger drop compared to passenger vehicles. The impact of the BS6 emission regulations introduced in April 2020 led to an increase in the price of diesel vehicles, which account for the majority of commercial vehicles. and the economic downturn caused by the spread of corona infection. The decline was also exacerbated by the pandemic. Light commercial vehicles fell 33.5% to 376,000 units while medium and heavy commercial vehicles declined 55.3% to 505,000 units.

Market leader Maruti Suzuki fell 18.2% to 1.24 million units. However, its market share in the automobile market increased 2.5pp to 42.1%. However, this is strongly due to the drastic contraction of the Indian commercial vehicle market in 2020 which led to the expansion of Maruti Suzuki’s share. In the passenger vehicle market, where Maruti Suzuki is strongly represented, the automaker’s share declined 0.3pp to 49.9%. The sales of low-priced passenger car models such as the Swift and Alto were relatively strong, but Maruti Suzuki saw a drop in the utility vehicle segment, where the automaker is facing stiff competition.

Looking at other automakers, Hyundai, ranked second in 2020, dropped 17% to 424,000 units while its market share increased 1.0pp to 14.4%. Tata Motors declined 28.9% to 376,000 units. Although passenger vehicle sales increased, the sales of commercial vehicles markedly declined. Mahindra & Mahindra decreased 35.2% to 296,000 units. Passenger vehicles dropped some 40% while commercial vehicles fell around 30%. Kia, which entered the Indian market in August 2019, sold 140,000 units. it ranked fifth in the overall automobile market with 4.8% and took third place in the utility vehicle market with 15.6%.