Toyota’s (including Lexus) light vehicle sales in the United States fell 1.8% year-on-year in 2019 to 2.3 million units. Although sales have declined for the fourth consecutive year after peaking at 2.49 million units in 2015, sales volume has remained above 95% of the peak level in 2019, maintaining strong performance. As the US market as a whole fell 1.5%, Toyota's share declined slightly to 14.0%. While passenger vehicles dropped 4.9% to 850,000 units, light trucks increased 750 units to 1.53 million units, indicating that the trend of shifting demand to SUVs continues.

Looking at the sales trends of major models in 2019, sales of the RAV4, Toyota’s best-selling model in the United States since 2017, increased 4.9% to 448,000 units, maintaining the top position. In addition to the full-model change of the RAV4 in the US market in November 2018, sales were also boosted by the RAV4 Hybrid strong performance, increasing 92.3% to 93 thousand units in 2019. The RAV4 Hybrid went into production at Toyota’s Toyota Motor Manufacturing Kentucky factory in the US in January 2020. Local production of the model is expected to further increase sales. The Camry, which is the second best-selling model after RAV4, fell 1.9% to 337,000 units. More than two years have passed since its overhaul, and it appears that demand has tapered off. However, the HEV version increased 13.7% to 26,000 units. The Corolla inched up 0.4% to 305,000 units. The model was fully-redesigned in March 2019 and Toyota added a HEV version as well. Although the Tacoma’s sales increased significantly in 2018 due to the adoption of the TSS advanced safety system as standard equipment, sales only went up 1.3% to 249,000 units in 2019.

Looking at the Lexus brand, the ES increased 5.9% to 51,000 units and the UX skyrocketed 37 times to 17,000 units. Marked increase in HEV sales boosted both models’ sales results. Toyota has not announced a US sales target for 2020, but is likely to aim to maintain a level close to the previous year.

Toyota aims to increase electric vehicle sales share to over 15% by 2020 in the US. In 2019, Toyota’s electric vehicle sales share approached its target of 11.5%, up 2.7 points, thanks to a significant increase in sales of HEVs such as the RAV4, Lexus ES and UX. In addition to starting local production of the RAV4 Hybrid in 2020, the launch of the RAV4 Prime (PHEV) is scheduled for the summer. It appears that sales of the RAV4 will continue to have a significant impact on Toyota’s US sales. 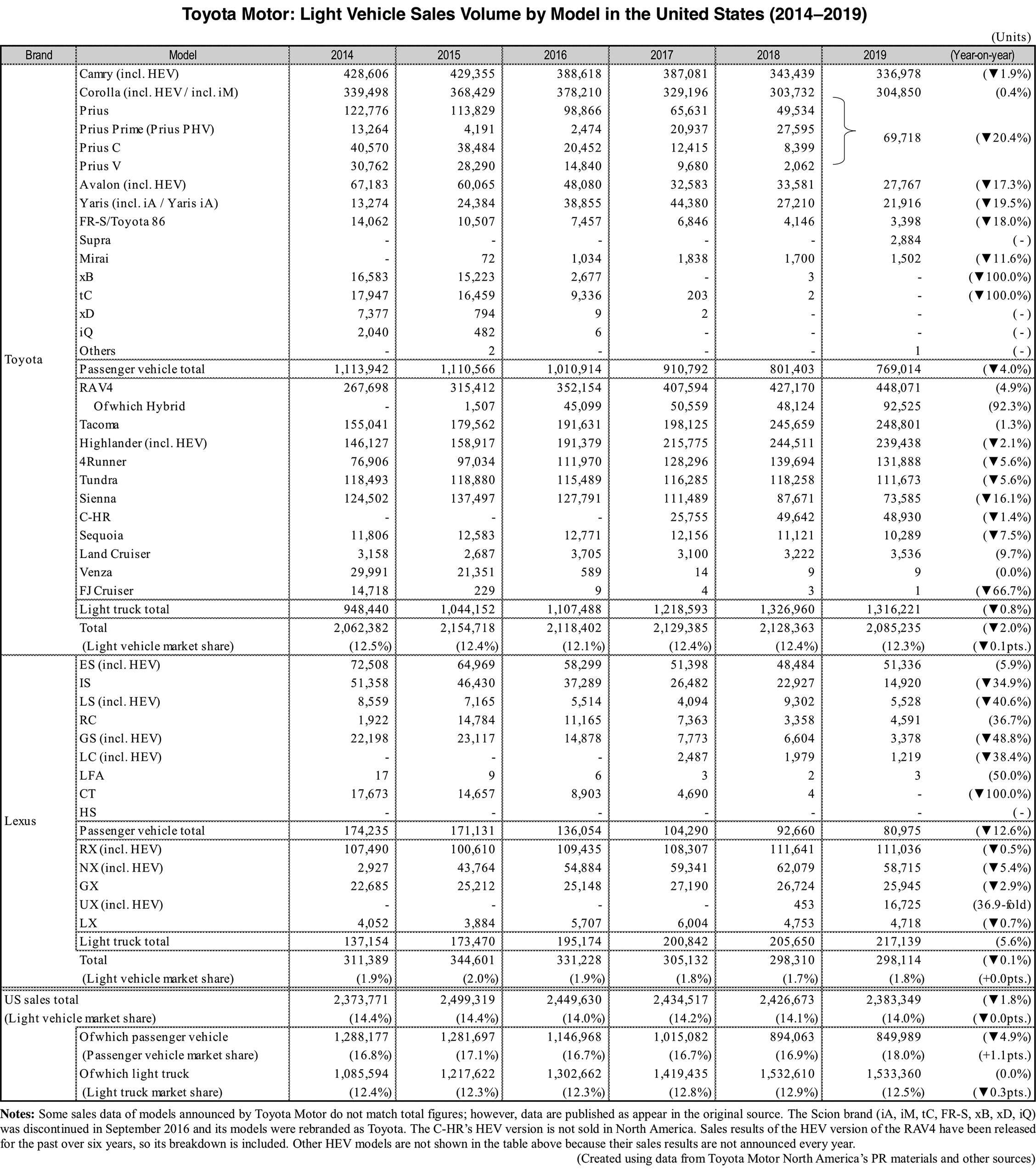 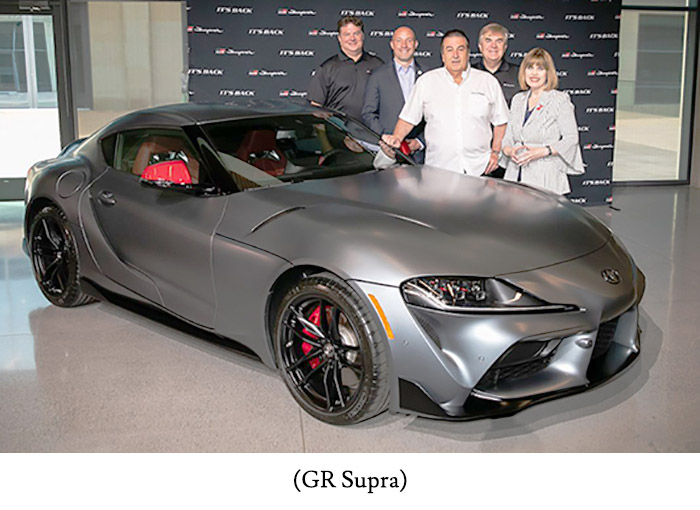 ・The new GR Supra was launched in July 2019. – The Launch Edition was delivered first (limited to 1,500 units) with a base price of 55,250 US dollars (base price of the regular model is 49,990 US dollars). – The Launch Edition is available in three colors Absolute Zero White, Nocturnal Black and Renaissance Red 2.0. – There’s a carbon-fiber badge on the passenger side of the dashboard. It displays the car’s number in the series and bears Toyota Motor President Toyoda Akio’s signature. – The powertrain combines a 3.0L turbocharged gasoline engine with It also has a VIN ending in 20201, indicating the year the model was launched. an eight-speed automatic transmission. – The first model of the Launch Edition was purchased by Toyota dealer John Staluppi for 2.1 million US dollars at the Barrett-Jackson auction in Scottsdale, Arizona in January 2019. The vehicle was delivered in June 2019 ahead of the model’s official launch.

Enhancement of the 4Runner such as standardization of TSS-P

・In September 2019, the Toyota Safety Sense P (TSS-P) crash protection package was introduced to all grades of the 4Runner 2020 model as standard equipment. – TSS-P features a collision avoidance system with a pedestrian detection function, a lane departure warning with a meandering warning system, an automatic high beam, and a high-speed dynamic radar cruise control (DRCC). – Along with the introduction of a high-resolution 8-inch touchscreen display for audio, the instrument panel design has been renewed. – The 4Runner is compatible with Apple CarPlay, Android Auto and Amazon Alexa. Starting with the Prius, these functions are being added to other models as well.
Please log in or subscribe to AAA weekly to view the rest of this report.
Free trial subscriptions are available!