Toyota Motor has been working on optimizing its domestic production system in recent years. In 2020, Toyota’s Tsutsumi Plant began production of the Lexus ES whose production was also launched by Toyota Motor Kyushu. Also in 2020, Toyota Auto Body’s Fujimatsu Plant and Inabe Plant started production of the Alphard and its twin the Vellfire. Parallel production was also scheduled to start of the Yaris Cross at two plants of Toyota Motor East Japan in the summer of 2020. In 2021, Toyota’s Motomachi Plant and Toyota Auto Body’s Fujimatsu Plant are scheduled to begin parallel production of the Noah and its twin the Voxy. Although multisite-production has a negative effect on efficiency, it is effective for risk hedging in emergencies such as the outbreak of the new coronavirus. For this reason, parallel production of additional mass-manufactured models is likely in the future. In addition, the operations of four Toyota plants, which had been controlled by each company, were consolidated under a production headquarters. By facilitating mutual utilization of production technology and production functions of each factory, Toyota has created a system that can respond to changes in demand more flexibly.

Since April 2020, production has been restricted at all Toyota plants, either by suspending operations or by reducing to one shift due to the pandemic. According to Toyota, production was reduced to 60% of the original plan in June which was increased to 90% in July and about 97% in August. 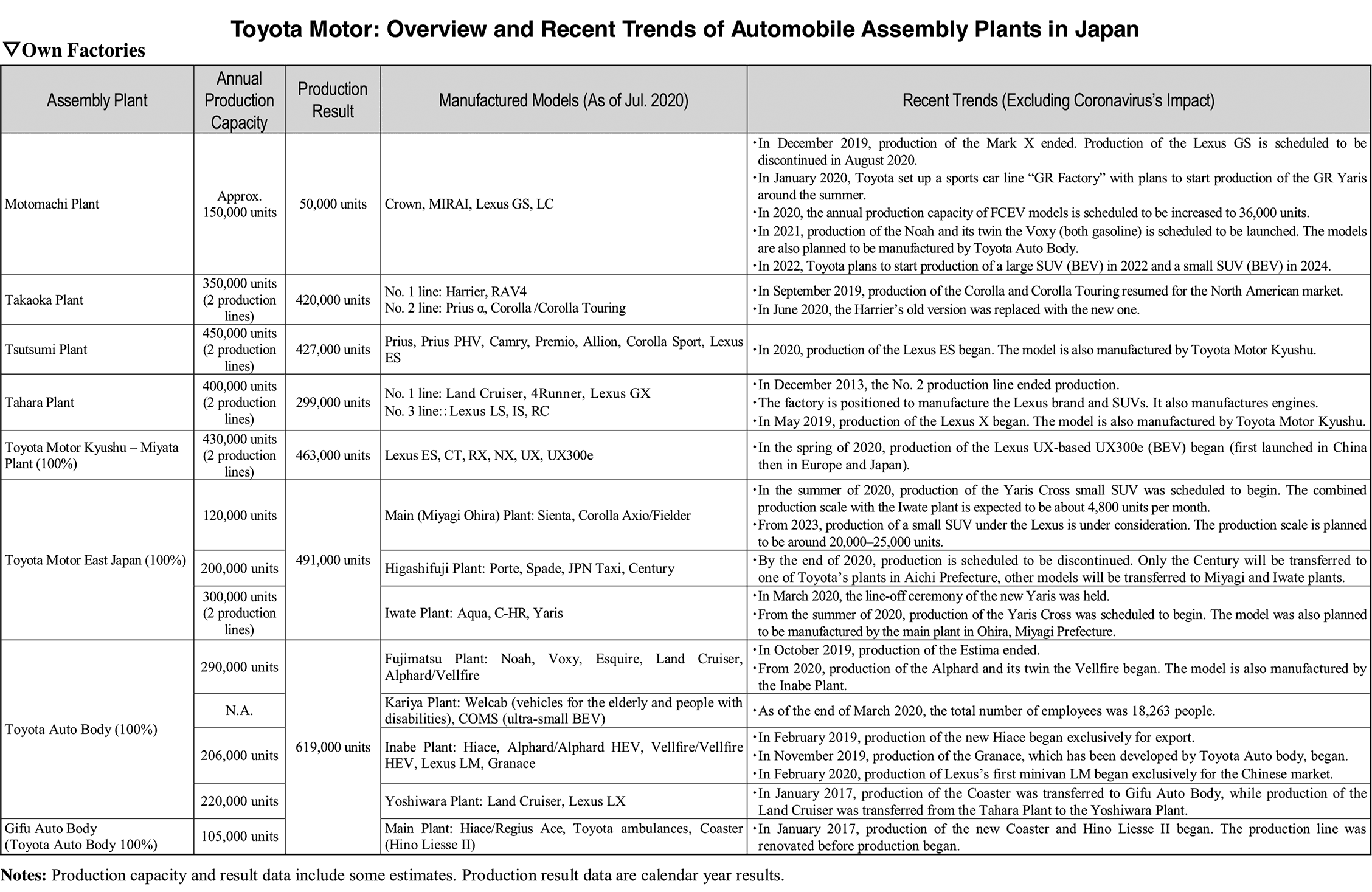 ・In January 2020, Toyota set up Monozukuri Research and Development Center which engages in the development of both prototype and mass-production technology. – Approx. 4,200 people are employed by the center. The center’s aim is to create an environment where people can experience production technology and skills that are not bound by conventional frameworks, and to strengthen the training of manufacturing professionals.

・In June 2020, the operations of Toyota’s Motomachi Plant, Takaoka Plant, Tsutsumi Plant and Tahara Plant, which had been controlled by each company, were consolidated under a production headquarters. – Production technology and production functions of factories will be managed collectively, and a system will be established to integrally promote the planning and projects of all factories such as the launch of mass production. – Toyota will facilitate communication and promote the sharing of production technology.

Building a flexible production system to level the utilization rate

・In December 2019, Toyota announced to start “pick-up logistics (milk-run method)” in the Tokai region (Aichi prefecture, Gifu prefecture, Mie prefecture, Shizuoka prefecture) from September 2020. – In the past, suppliers arranged and delivered parts to Toyota. – Toyota intends to pursue overall optimization to resolve the issue of decreasing number of drivers, reduce work load and reduce the environmental impact. – This method was introduced at Toyota Motor Kyushu’s Miyagi Plant in 2016 and at Toyota Motor East Japan’s Miyagi Ohira Plant in the fall of 2018. It is said that transportation efficiency was improved by about 12% and CO2 emissions were reduced by about 6% compared to the conventional method. – Toyota’s plan is to expand its coverage to 240 plants of 200 companies in the next two years. In the Tokai region, both transportation efficiency and CO2 emissions are expected to improve by about 8%.

・In June 2020, Toyota announced that it would not request parts manufacturers to reduce parts prices in the first half of fiscal 2020. – The decision has been made in consideration of the business conditions of parts manufacturers affected by the new coronavirus.

Resumption of recruitment of temporary workers

・Apparently Toyota hired dozens of fixed-term employees for the Motomachi Plant in July 2020. – Recruitment began in the first half of February 2020, but was temporarily suspended due to the outbreak of the new coronavirus. Recruitment I expected to be gradually expanded.

Factory suspension due to heavy rains

・From 9:00 pm on July 6 to 11:00 am on July 8, 2020, three plants in Fukuoka Prefecture of Toyota Motor Kyushu suspended operation due to heavy rain. – The same factories temporarily suspended operation due to heavy rain in August 2019 as well. So the company is looking into implementing measures against heavy rain. (Created using Toyota Motor’s PR materials and various media sources)
Please log in or subscribe to AAA weekly to view the rest of this report.
Free trial subscriptions are available!