Hyundai Announced Business Expansion in Indonesia with the IK-CEPA

In November 2019, South Korea and Indonesia have announced the official completion of the Indonesia-Korea Comprehensive Economic Partnership Agreement (IK-CEPA) negotiations. This almost 8-year-long ratifying process is expected to be signed off in early 2020 and go into effect within the same year.

The IK-CEPA is a free trade deal between the two countries, including the elimination of tariffs on South Korean automotive components and steel products. Hyundai Motor Company (Hyundai Motor) has officially announced its plan to build a new manufacturing plant in Indonesia on the very next day of the trade agreement. One can assume that this trade policy is strongly linked to Hyundai Motor’s investment and is a favorable opportunity to strengthen its presence in the Indonesian market.

According to South Korea’s Ministry of Trade, Industry and Energy, the IK-CEPA final agreement entails enhanced investments for Indonesia in the automotive sector, such as automobiles as well as steel and resin products. Some of the current Indonesian tariffs on South Korean products are as follows: 5% on vehicles and automotive components and 5-15% on steel products. With the launch of IK-CEPA; however, these tariffs will be removed immediately. It indicates that this newly agreed enactment will strengthen business connections and establish new supply chains and logistics between South Korean automotive suppliers and the Indonesian market.

Hyundai Motor is going to be greatly benefited from the IK-CEPA as the South Korean automotive company enters into a memorandum of understanding with the Indonesian government to build a vehicle manufacturing plant in Kota Deltamas, east of Jakarta. The company will make a full investment on its own for this business initiative. The new facility will break ground in December 2019 and is expected to begin commercial production in the second half of 2021 with an annual production capacity of 150,000 units. With the IK-CEPA free trade agreement, the product launch is anticipated to utilize South Korean supply chains, providing indirect support for other South Korean companies, such as POSCO, Hankook Tire, and Lotte Chemical.

・The negotiations of the Comprehensive Economic Partnership Agreement (CEPA) have been concluded between Indonesia and South Korea in Busan, South Korea on November 25, 2019. - The completion was officially announced by Minister of Trade of India Agus Suparmanto and Minister for Trade of South Korea Yoo Myung-hee at the the ASEAN (Association of Southeast Asian Nations)-ROK (Republic of Korea) Commemorative Summit in Busan. - The governments of South Korea and Indonesia agreed to mandate a Joint Study Group to conduct a joint feasibility study for a CEPA in May 2011. Since then, they have had 10 negotiation meetings in total. Although it has been put off for 5 years after the 7th meeting in February 2014, they resumed the negotiation process in February 2019 and reached a substantial agreement on the IK-CEPA on October 16th, 2019. ・They will proceed with negotiations on detailed regulations, ratification, and other related procedures. As of January 2020, it is expected for both countries to sign the IK-CEPA by April 2020, and the IK-CEPA will take effect in 2020.

IK-CEPA Terms of Agreement (by South Korean Ministry of Trade, Industry and Energy)

・It aims to establish and strengthen a mutual cooperation framework between governments and companies in the fields of industrial development, such as automotive, energy, cultural content, and infrastructure.

Overview of trade between South Korea and Indonesia 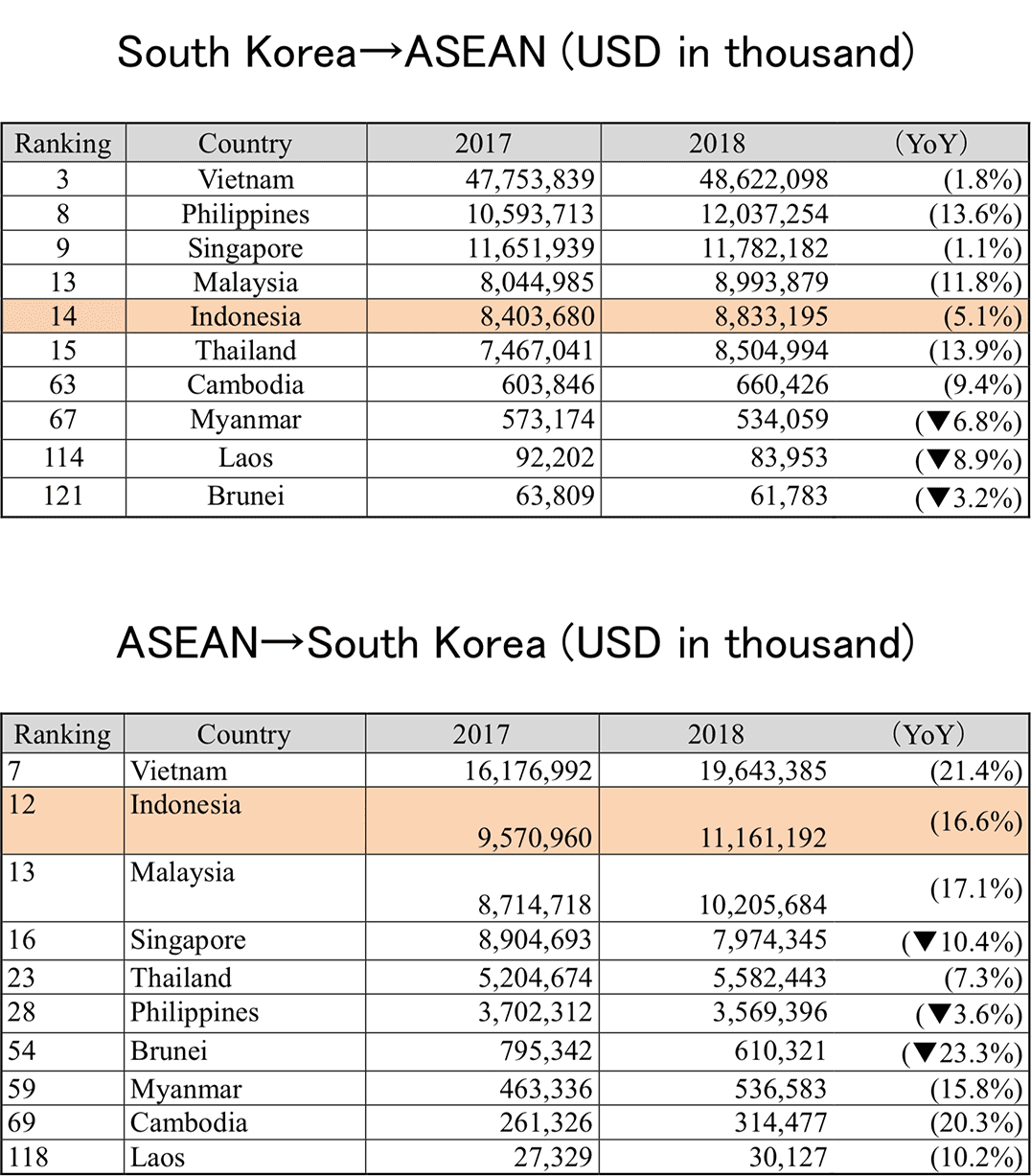