In India’s passenger vehicle market, the proportion of diesel vehicles continues to shrink. In 2019, the ratio of diesel passenger vehicles declined 4.5pp to 32.6 percent (data used for this report were taken from Haymarket SAC Publishing (India)’s automobile magazine AUTOCAR Professional). After diesel vehicle share reached a record high in 2012 with 52.3%, it has been falling ever since.

The reason diesel ratio has been declining is the narrowing price difference between gasoline fuel and diesel fuel. As of 2012, there was a 60% gap between the two fuels. However, due to subsequent revisions of the government’s fuel price policy, this difference dropped to 10% by 2019, price advantage of diesel fuel falling sharply. In addition, the new emission regulation Bharat Stage 6 (BS6), which started to be applied in April 2020, is another factor that pushes down the diesel vehicle ratio. In order to comply with BS6, a significant increase in cost is inevitable especially for diesel vehicles. For this reason, automakers have either discontinued their diesel vehicle lineup or sell them at higher prices. As a result, it is likely that the diesel vehicle ratio will fall below 20% in 2020.

According to data released by Haymarket SAC Publishing (India), passenger vehicle sales decreased 12.4% year-on-year to 2.94 million units in 2019. Looking at the data by fuel type, gasoline vehicles (including CNG and PG) fell 6.2% to 1.98 million units, while diesel vehicles declined 22.9% to 958,000 units. For the first time since 2011, the sales volume of diesel vehicles dropped below 1 million units.

Diesel vehicle ratio continued to drop in both the passenger car and the utility vehicle sector in 2019. The proportion of diesel passenger cars was 47% in 2012 but dropped to 15% in 2019. This trend indicates that the popularity of small diesel sedans and hatchbacks is coming to a close. The diesel ratio of utility vehicles stood at 71.8% in 2019, dropping 11.4pp compared to the previous year. The diesel ratio of utility vehicles was 98% as of 2012, but it has been declining due to the popularity of small SUVs with gasoline engines.

Maruti Suzuki, India’s largest passenger vehicle maker, has decided to discontinue the sales of diesel vehicles following the introduction of BS6 emission standards. Both the Fiat-supplied 1.3L diesel engine and the self-developed 1.5L diesel engine were pulled from the market. The bi-fuel CNG engine, which sells 100,000 units a year, will continue to be used and the sales will be increased to replace demand for diesel vehicles.

Unlike Maruti Suzuki, Hyundai continues to use diesel engines even after the introduction of BS6. In fact, Hyundai is the only automaker that has decided to keep small diesel passenger cars on the market. The Grand i10 and Aura compact models are equipped with a 1.2L diesel engine. It appears that Hyundai wants to monopolize niche demand by differentiating from other automakers. 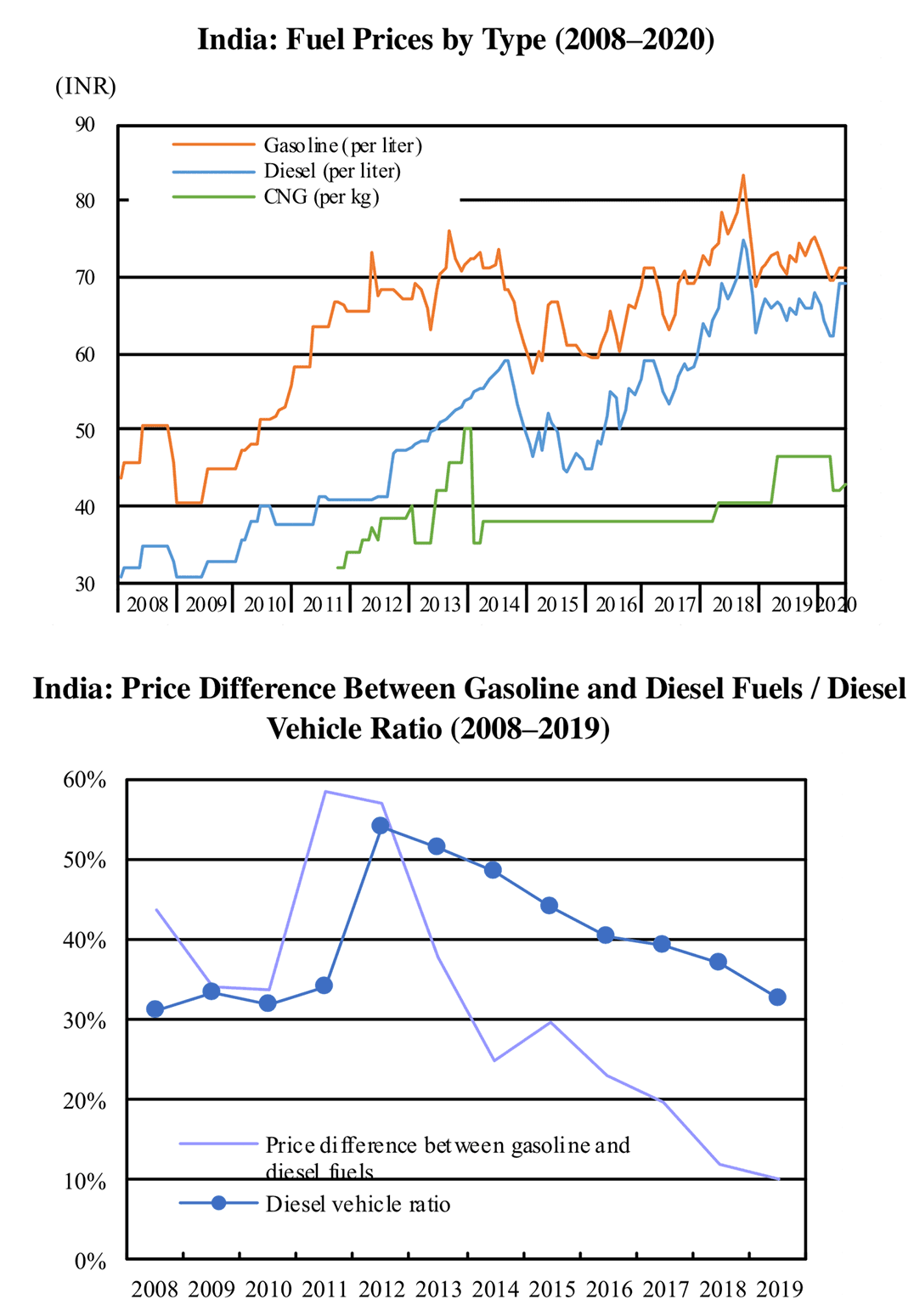 Fuel price policy and its impact on diesel vehicle sales

・In the Indian passenger vehicle market, after reaching a record high of 54% in 2012, diesel vehicle ratio has continued decline to this day due to the impact of the government’s fuel price policy. ・Timeline of fuel price policy. – June 2010: Liberalizing the price of gasoline fuel (abolition of subsidies). – September 2012: Gradual reduction of diesel fuel subsidy. – October 2014: Liberalizing the price of diesel fuel (abolition of subsidies). ・The price gap between diesel and gasoline in New Delhi expanded to 25-30 rupees from 2011 to 2012 due to a gap in the timing of the price liberalization of the two fuels. After peaking during this period, the price gap has narrowed since 2013. The continuing decline in the price advantage of diesel fuel is a major factor behind the decline in the proportion of diesel vehicles in passenger vehicle sales. – As of the end of 2019, the retail price in New Delhi is 75.14 INR/L for gasoline fuel and 67.96 INR/L for diesel fuel, the price difference becoming a mere 7.18 INR/L. 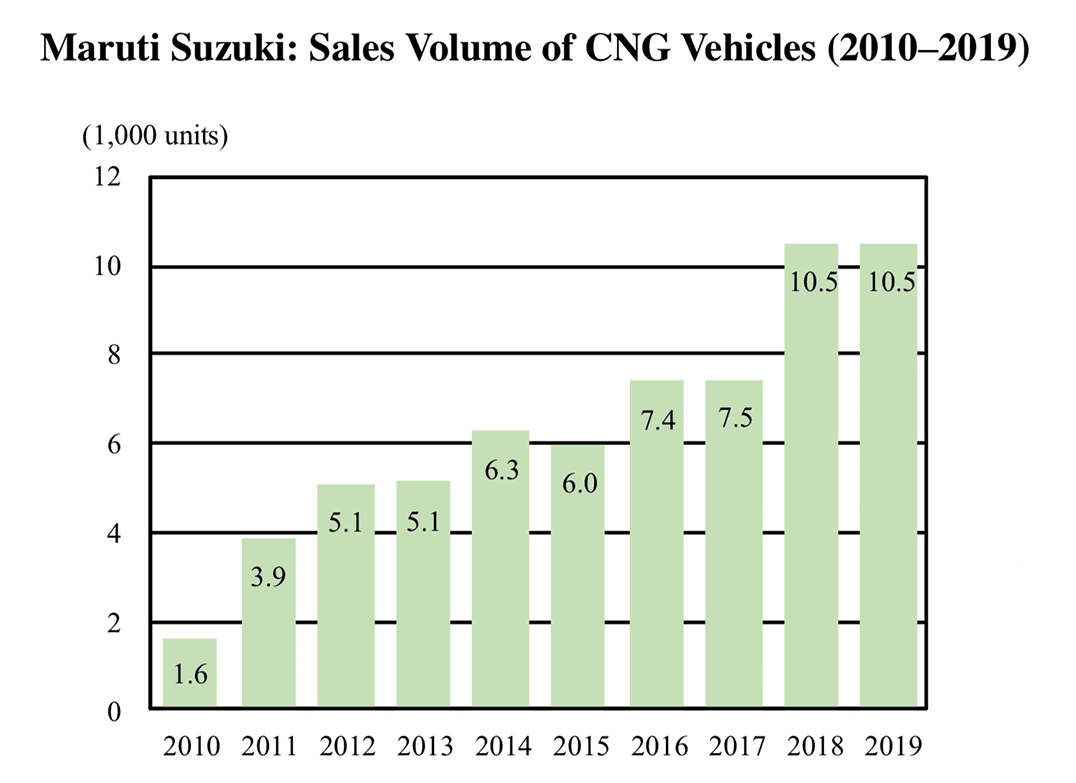 ・In India, the use of CNG vehicles may increase in the future, partially replacing the demand for diesel vehicles. It is likely that demand for CNG vehicles will increase especially in the fleet vehicle market due to increased diesel vehicle prices following the introduction of BS6 emission standards and declining price advantage of diesel fuel. ・The Indian government has set a long-term goal of increasing the number of CNG filling stations in India to 10,000 by 2030 which will improve the environment necessary for the spread of CNG vehicles in the future. – The Minister of Petroleum & Natural Gas Dharmendra Pradhan announced that the number of CNG stations will be increased from about 1,400 (current level) to 10,000 over the next 10 years. ・CNG also has an advantage in terms of price. The price of CNG in New Delhi remains low relative to the prices of gasoline fuel and diesel fuel (about 70% of both fuels as of May 2020). ・Among automakers, Maruti Suzuki is working on expanding its product lineup of CNG vehicles. – Maruti Suzuki started production and sales of bi-fuel CNG vehicles in 2010. Cumulative sales reached 500,000 units in December 2018. – Since the beginning of 2020, a number of CNG models that comply with BS6 emission standards have been introduced to the market. The Alto was launched in January, the Ertiga and Wagon R in February, the Eeco minivan in March and the Carry light truck in May. – Maruti Suzuki positions CNG vehicles as one of eco-vehicles. The “Mission Green Million” program, announced in February 2020, has a goal of selling 1 million eco-vehicles in the next few years. Notes: Fiscal year is from April through to March of the following year. Volume for 2019 is estimate. (Created using data from Indian government documents, Maruti Suzuki’s PR materials and various media sources)
Please log in or subscribe to AAA weekly to view the rest of this report.
Free trial subscriptions are available!