Suzuki Motor’s sales in ASEAN (four countries) in the first half of 2021 increased 39.0% year-on-year to 69,000 units. Although sales in Indonesia, the Philippines and Vietnam increased compared to the same period of 2020 when demand sharply dropped due to the outbreak of the new coronavirus, sales in Thailand declined. 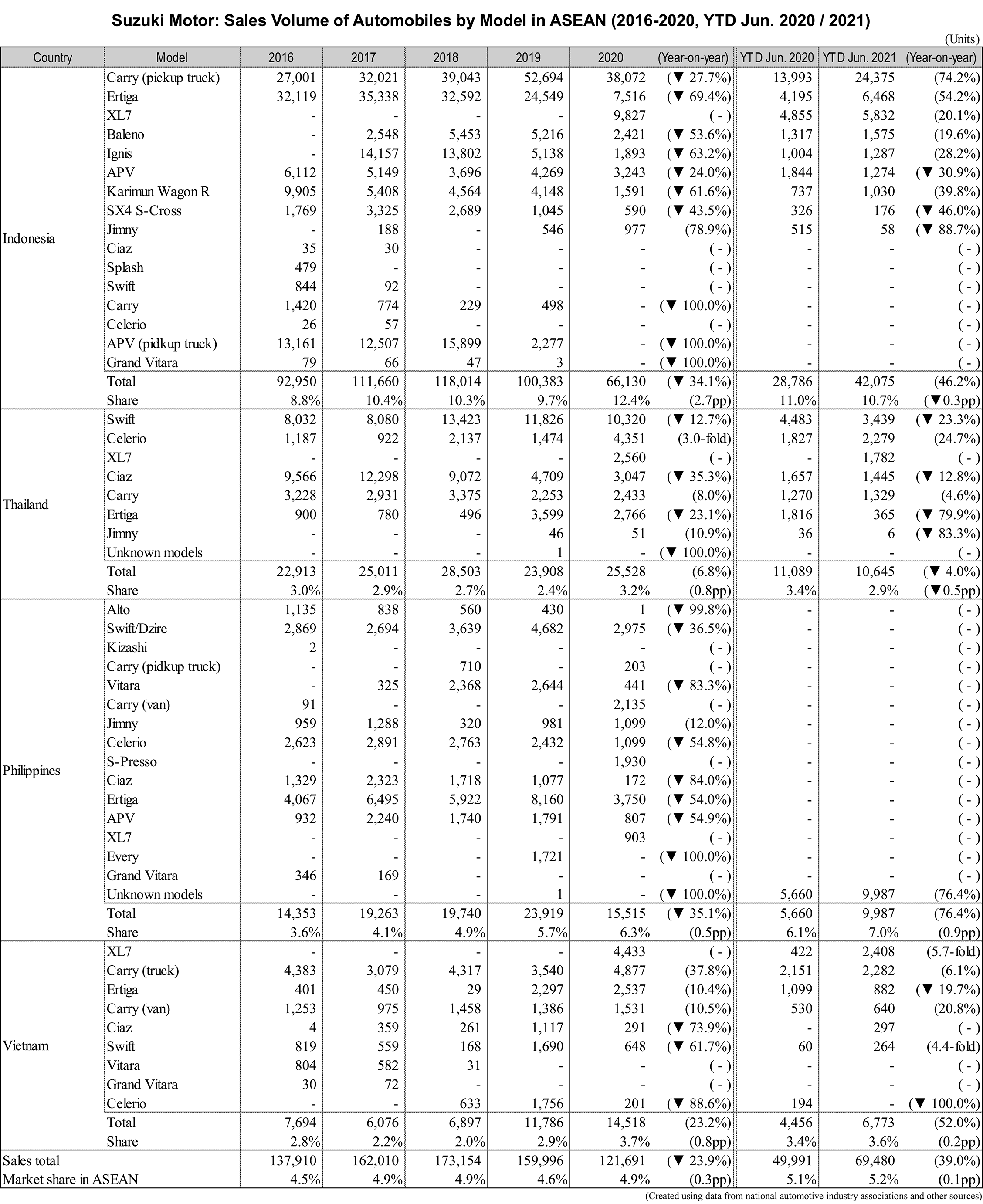 Looking at sales by country in the first half of 2021, Indonesia, which accounts for more than 60% of Suzuki’s ASEAN sales, saw demand increase 46.2% year-on-year to 42,000 units, but the automaker’s market share decreased 0.3 pp to 10.7%. Sales of the Carry, the best-selling model in Indonesia, expanded 74.2% to 24,000 units. In addition, sales of the Ertiga, up 54.2% to 6,468 units, and the XL7, up 20.1% to 5,832 units, which are subject to the tax reduction measures, implemented in March 2021, increased. Regarding the XL7, launched in February 2020, is facing stiff competition from the Mitsubishi Xpander Cross, released in November 2019. However, in the first half of 2021, the XL7 exceeded the sales result of the Xpander Cross by 1,785 units. On the other hand, in Thailand, the number of vehicles Suzuki sold decreased 4.0% to 11,000 units, and the automaker’s market share dropped 0.5 pp to 2.9%. In addition to the stagnation of the sedan / hatchback segment in Thailand, sales of the Swift, down 23.3% year-on-year to 3,439 units, were sluggish due to strong competition with the Honda City and Toyota Yaris. Suzuki has set a sales target of 30,000 units in Thailand for 2021 and intends to achieve it by expanding its local sales network and body and coating centers. In addition, in Malaysia, Suzuki has formed a partnership with Malaysia’s Naza Group. The Swift Sport was launched by the two partners in April 2021 which was the start of Suzuki’s reentry into the Malaysian market for the first time in five years. On the other hand, in Myanmar, where Suzuki controls about 60% of the market, construction of a new factory has been suspended due to a coup d’état and the future of operations remains uncertain.