Honda Motor’s motorcycle business is stepping up efforts to electrify products and strengthen product competitiveness in response to stricter global environmental regulations and intensifying competition in the Asian market.

In the first quarter of 2020, Honda's motorcycle sales went down 48.6% year-on-year to 274.2 billion JPY and operating profit dropped 84.0% to of 11.2 billion JPY. Due to the suspension of production and sales activities in India, Malaysia, the Philippines and other markets triggered by the pandemic, sales and profits declined significantly. Global motorcycle sales in the first quarter of fiscal 2020 decreased 62.6% to 1.22 million units. The impact of the new coronavirus will likely continue mainly in India and Indonesia. It is expected that full-year sales will decrease 23.5% to 14.8 million units. Although the market climate will remain severe in the short term, Honda expects that demand for motorcycles will recover once the pandemic subsides, and will steadily improve with efforts such as electrification and efficiency improvement.

As for electrification, in April 2020, the BENLY e: was released as the first electric motorcycle intended for sales to corporations in Japan. Since Honda’s PCX Electric electric scooter, whose leasing to corporations started in 2018, is expensive and has a short driving range of 41km, the BENLY e: is expected to arouse more demand with its lower price and greater driving range.

Regarding low-priced mass-produced models sold in Southeast Asia and India, while costs are increasing due to stricter environmental regulations, Honda is aiming to improve competitiveness by enhancing efficiency and by standardizing platforms for models with annual sales of more than 1 million units.

・In October 2020, Honda Fleet Management, a connected service for motorcycles, was launched. – Its release is timed to coincide with the launch of the BENLY e: Series. – It provides services such as vehicle information management and safe driving diagnosis. – Honda cooperated with a Japanese startup SmartDrive in the development of the service. Honda has adopted SmartDrive’s driving platform. 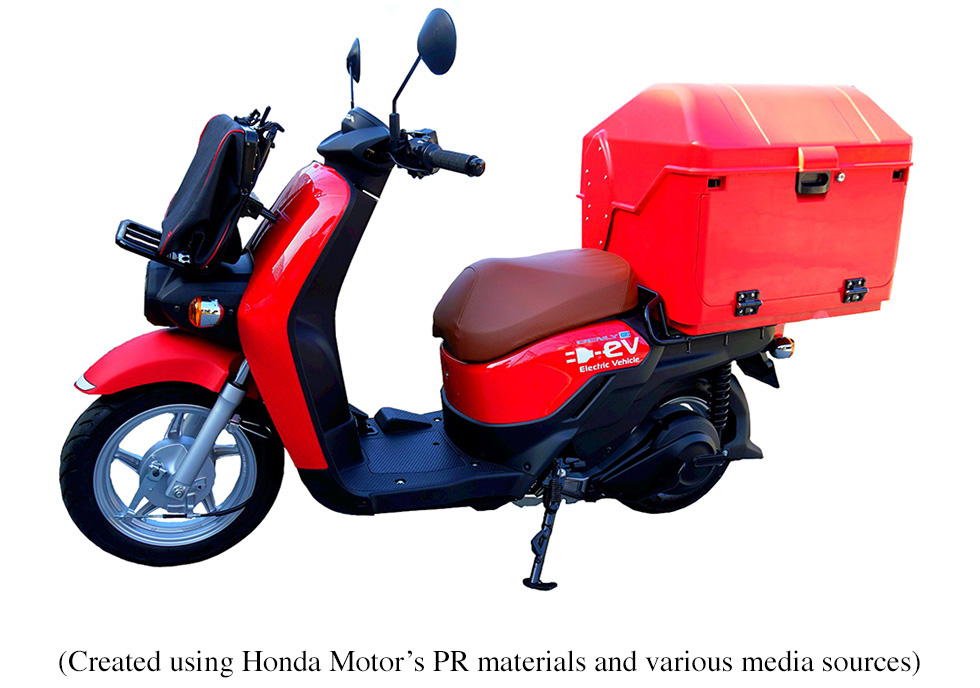 ・In September 2020, Honda began a demonstration experiment using the BENLY e: in collaboration with Osaka Prefecture and Osaka University. – The BENLY e: I is rented out to university students and faculty members, and replaceable batteries are distributed at affiliated convenience stores on campus and in its vicinity to verify the effectiveness of battery replacement.

・Honda introduced the “Mega Model 3 Strategy” starting with the release of the Genio scooter in Indonesia in June 2019. – Mega models are scooter type, light motorcycle type and cub type relatively inexpensive and practical motorcycles with annual sales of over 1 million units. They will use the same platform technology. – Mass production is maximized by standardizing platforms that used to be different depending on the country and displacement. – Simultaneously, Honda will introduce new production technology to reduce costs. – The Genio has adopted Honda’s new frame technology eSAF (enhanced Smart Architecture Frame). The frame uses the latest press and laser welding production processes. – Following the Genio, the fully-redesigned BeAT, launched in January 2020, uses the same frame. – Honda’s aim is to introduce a new platform that takes advantage of economies of scale in response to stricter environmental regulations in India and Southeast Asia, and the growing presence of Western brands in the mid- and low-priced markets. (Created using Honda Motor’s PR materials and various media sources)
Please log in or subscribe to AAA weekly to view the rest of this report.
Free trial subscriptions are available!