Competition is expected to intensify in the automobile market as we enter the 2020s prompting automakers to introduce new-generation products to achieve growth. In this report, WATT has summarized the technology and development trends of platforms and accompanying powertrains of Japanese passenger vehicle manufacturers. These core technologies of next-generation products are expected to support medium to long-term business strategies.

Toyota will introduce the TNGA (Toyota New Global Architecture) design concept, which has been applied to models in the C segment and beyond, to the Yaris which is scheduled to be released in February 2020, expanding TNGA platform into the B segment. After reducing costs by improving the component sharing ratio, TNGA’s high-efficiency powertrains such as the Dynamic Force Engine and parallel-axis two-motor HEV system were made available for the B segment. Toyota aims to further enhance the product competitiveness of the entire lineup by aligning the TNGA design concept with all of its main segments.

Honda will introduce a new vehicle design concept, Honda Architecture, for the development of global strategic vehicles which are to be introduced after 2020. The underbody such as the body frame and engine room will be shared by all models, and the multiple HEV systems that have been deployed so far will be integrated into a two-motor system. In addition to strengthening the competitiveness of products by improving fuel efficiency, Honda aims to reduce the development and production costs by increasing the standardization rate of parts among models. and to rewind the automobile business that is sluggish in terms of profits. The automaker also aims to roll back unprofitable automobile operations.

In addition, Nissan and Mitsubishi will further increase the number of models based on the CMF (Common Module Family) platform which is shared by the Renault alliance in pursuit of economies of scale.

In preparation for the future popularization of BEVs, Japanese OEMs have also begun full-scale development of BEV-dedicated platforms following the European trend. Toyota announced plans to develop a BEV-only platform (e-TNGA) in June 2019. In order to enhance product competitiveness, the company plans to develop BEVs that make use of partner OEMs’ strengths for each model in cooperation with Subaru, Daihatsu and Suzuki among others. Honda will also develop a BEV-only platform that can be used for multiple models with an aim to expand its BEV lineup after 2020. In addition, Nissan, which is relatively ahead of BEV development among Japanese OEMs, is developing a new generation of BEV-only platforms. Nissan is focusing on extending cruising range and improving driving and riding comfort with the new platform. In addition, the company plans to increase cost competitiveness by sharing BEV-only platforms with alliance members such as Mitsubishi Motors, and is preparing to compete with leading European OEMs. 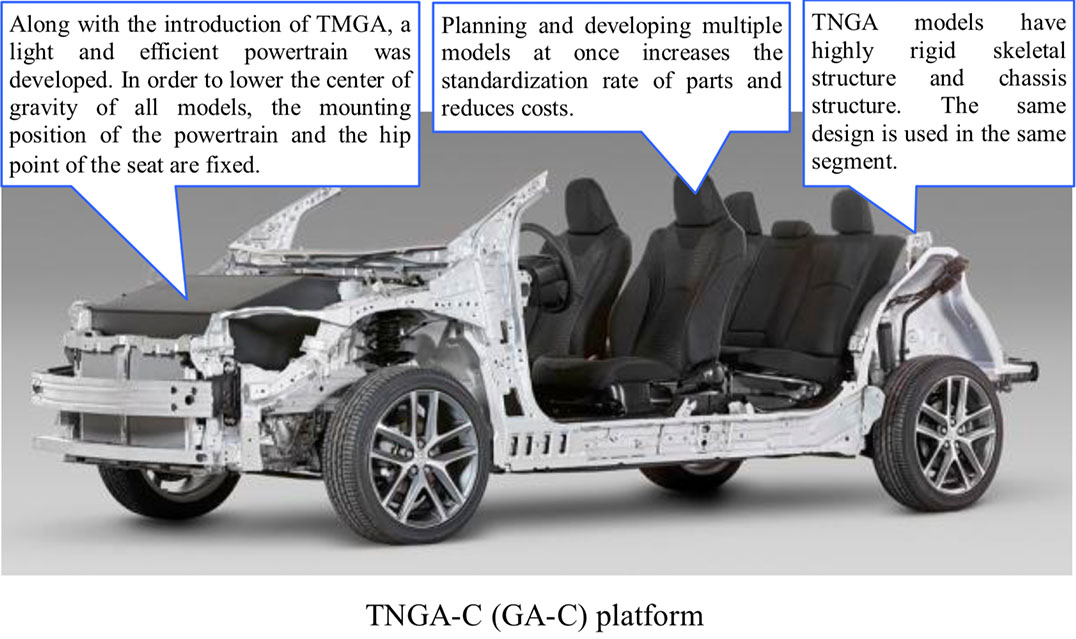 ・Toyota has introduced a new vehicle design concept, TNGA (Toyota New Global Architecture), to its in-house models starting from the fourth-generation Prius (2015). – The adoption of a high-rigidity frame layout with the aim of lowering the center of gravity and increasing rigidity improved basic vehicle performance (running, turning and stopping). TNGA is designed with fixed seating position and powertrain mounting position. All new models share this new design concept. – Five platform versions are available according to drive system and car grade. In addition, Toyota plans to develop a BEV-only platform called e-TNGA after 2020. Multiple models are planned to be built on each platform in an effort to improve the standardization rate of parts and reduce costs through economies of scale. ・Toyota is working to expand its product lineup in cooperation with capital alliance partners to meet various customer needs globally. – In collaboration with its subsidiary Daihatsu Motor, Toyota designs and develops mini cars and A-segment compact cars for Japan, and small strategic cars for the ASEAN region. – Toyota is developing strategic vehicles for the Indian market in collaboration with Suzuki Motor. The two companies also plan to deploy cars OEM supplied to each other in India. – Toyota is collaborating with Subaru in the development of the compact FR sports model Toyota 86 / Subaru BRZ. The model is built on Subaru’s platform. – In cooperation with Mazda, Yaris for the North American market is received from Mazda as OEM (Mazda 2-based sedan and hatchback). – Mazda Motor OEM supplies the Yaris (Mazda 2-based sedan and hatchback) to Toyota. Toyota sells the Yaris in the North American market. – Toyota’s luxury sports car Supra shares the same platform with the BMW Z4 (BMW CLAR platform). 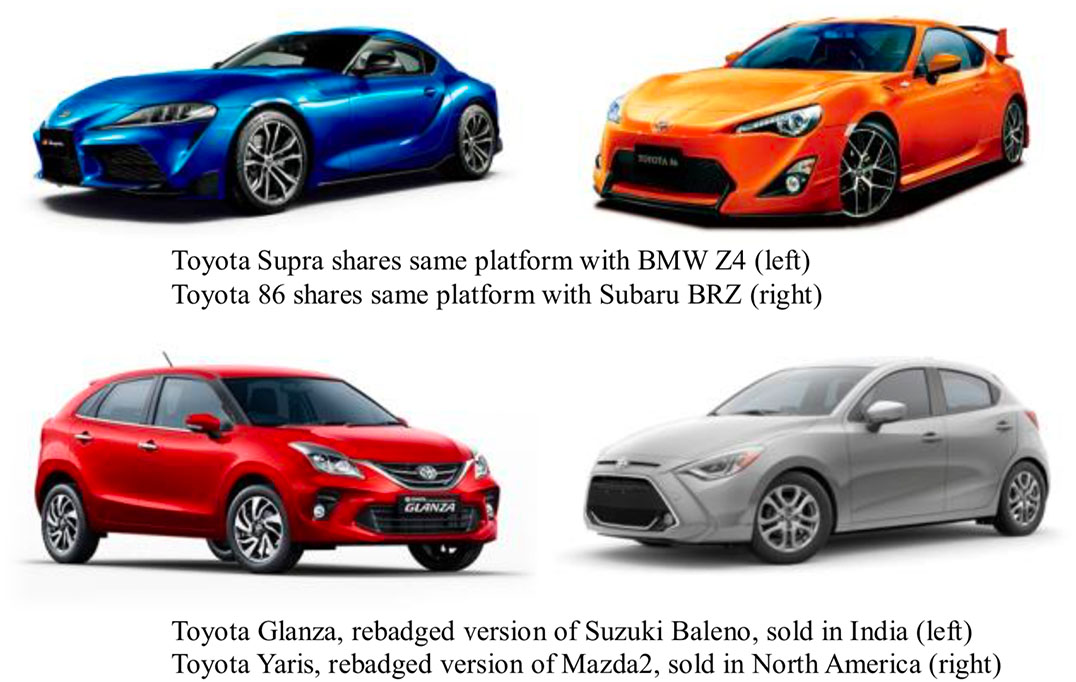 TNGA platform for B segment (GA-B)

・In September 2019, Toyota announced GA-B, a new platform for the B segment. – It will be first introduced to the new Yaris (former model name Vitz), which will be released in Japan in February 2020. Fully redesigned core B-segment models are expected to be based on the GA-B platform. – Continuing the previous TNGA design concept, the lightweight, high-rigidity platform and body design is intended to improve driving and handling stability. ・Yaris, the first Toyota model to be built on the GA-B platform, has actively adopted high-tensile steel sheets to reduce weight. – Hot stamping is used for the upper outer panel of the A pillar and the outer panel of the B pillar. Toyota introduced 980MPa tensile strength material for the lower outer panel. The rocker outer panel and roof-rail outer panel are made of 1.2GPa material. ・Yaris has adopted a ring structure that is also used in other models to increase rigidity. In addition, the rigidity of the mounting parts (shock tower etc.) of chassis parts such as steering and suspension has been increased to improve driving stability and steering stability. – Annular structure is adopted for the opening of the side structure and rear gate. – Instrument panel reinforcement adopted a ring structure, improving the sense of direct connection with the suspension and enhancing steering stability. – The torsional rigidity of the Yaris’ body was improved by more than 30% compared to its predecessor, and weight of the HEV version was reduced by up to 50 kg. 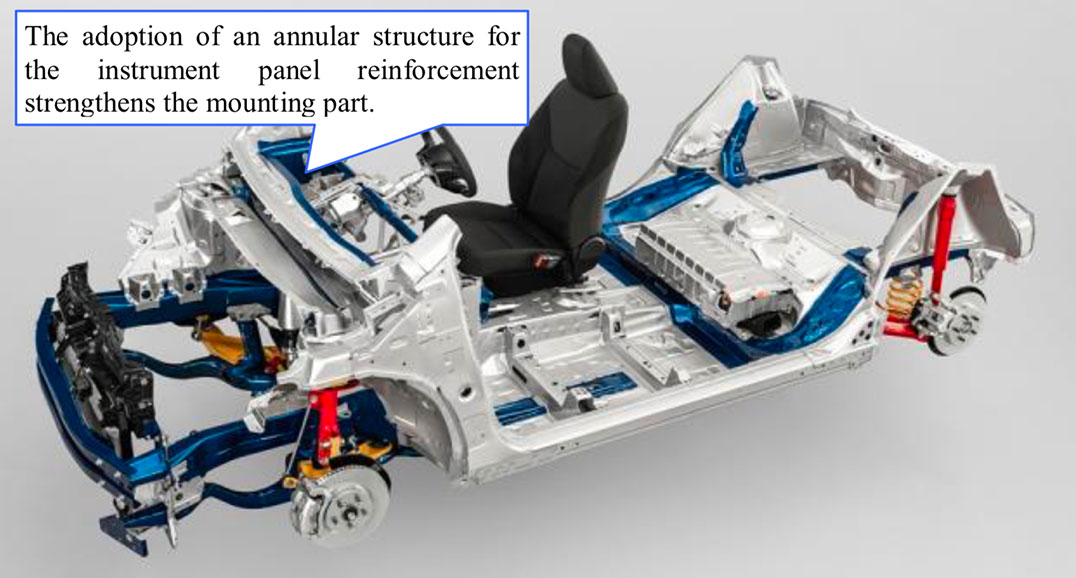 ・Until now, the suspensions of TNGA models were McPherson strut in the front and multi-link in the rear. The suspension system of the GA-B platform is MacPherson strut in the front just like before. On the other hand, the rear system was switched to a torsion-beam type system. – The suspension has been newly designed. The torsion beam-type system ensures the same riding comfort and trackability as those of high-end models. – The mounting angles of the suspension were changed. – The front suspension reduces friction during suspension stroke by directing the spring reaction line to the outside of the vehicle. It ensures flexible and smooth movement.

・Toyota is in the process of upgrading to a new generation of powertrains in line with the introduction of TNGA. – The Dynamic Force Engine technology has been introduced to gasoline engines with full improvement of the main models. In addition to the longer stroke of the engine cylinder, the tumble is strengthened by high-speed combustion by expanding the narrow angle of the valve with a straight-type intake port and laser-clad valve seat. The new technology ensures both fuel efficiency and power performance. – HEV models are switching to the new system. The FF-layout 2-motor system’s the motor arrangement was switched from coaxial to parallel shaft, and the reduction function was changed from a planetary unit to a spur gear to improve power transmission efficiency. The FR-layout type has an improved version of the conventional system. – Transmissions were downsized while the gear ratio range was expanded. CVTs are combined with a gear drive to increase gear ratio range and improve acceleration performance. ATs and MTs undergo downsizing and weight reduction. – The new generation hybrid system and the combustion concept of the Dynamic Force Engine will be shared by all models (also used by the new Yaris to be launched in 2020) to enhance product competitiveness.

・In June 2019, Toyota company announced that it will develop the BEV-dedicated e-TNGA platform. – TNGA’s design philosophy is inherited by the new BEV platform. It will have fixed seating position and drive-unit arrangement, while the wheelbase, overhang and overall width will be changed according to the vehicle type and model. – By modularizing each section of the car body floor (front part, center part), battery, and front and rear drive units, parts could be shared across vehicle types to reduce costs. – Toyota plans to deploy BEVs in six segments to meet various needs around the world. In order to increase product competitiveness in each segment, Toyota plans to design and develop products in cooperation with its partner OEMs. – As part of a joint BEV design and development project, Toyota and Subaru announced in June 2019 that they will jointly develop C-segment BEV SUV and deploy it under both brands.

・In November 2019, Toyota announced that it would establish a joint development company with BYD, a major Chinese electric vehicle manufacturer. – The two companies intend to design and develop BEVs and related parts including platforms for the Chinese market. – By combining BYD’s BEV development capabilities and Toyota’s quality and safety know-how, Toyota is aiming to strengthen the competitiveness of BEV products deployed in China and speed up development. – In 2020, Toyota and BYD is scheduled to establish a 50/50 joint venture. ・In response to China’s NEV regulations, Toyota announced a C-HR based BEV in the spring of 2019 which will be launched in 2020. – The model is built on Toyota’s TNGA-C (GA-C) platform. – Toyota has launched PHEVs based on the Corolla and Levin models. The two models are only released in China. Toyota is developing Chinese-only electric vehicles based on the GA-C platform.

・Toyota will adopt a new platform for the ultra-compact BEVs for short-distance travel that is planned to be released at the end of 2020. – The system is based on the electric 4WD HEV unit of E-Four. – It is a rear-wheel-drive model with the drive battery pack located under the cabin. Battery cooling system uses natural air cooling. 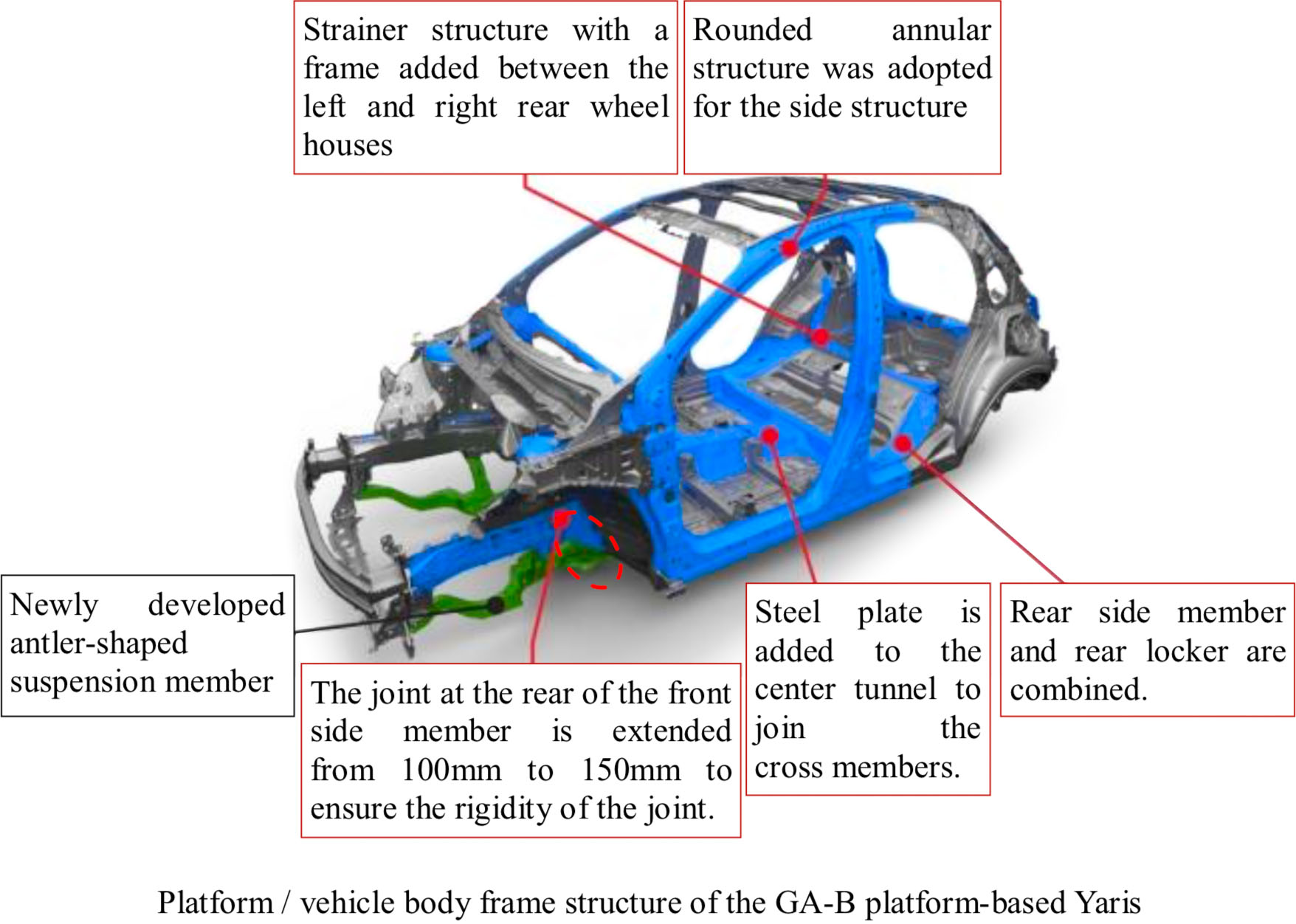