Since summer 2018, many companies have announced a number of new BEVs that are intended for sale. High-power all-wheel drive (AWD) systems are the mainstream because companies currently focus on midsize SUVs. Even the sector’s leading automaker Tesla equips all its models with AWD technology. The drive motors installed in these models are often induction motors (IM) but permanent magnet motors (PM) are also used.

However, small BEVs such as the Nissan Leaf are almost all front-wheel drive (FWD) and they are mostly powered by a PM. This report intends to shed light on this difference in technology.

This article will examine whether there are any technical circumstances specific to high-power AWD BEVs.

The reason why high-power BEVs are AWD because it is difficult to increase the output’s upper limit with a single motor, so multiple motors are needed to obtain output.

The maximum output of the vehicles (midsize SUV BEV) in the diagrams below is approximately 300 kW or more; however, the required output in normal driving (for example in WLTC mode) is at most 70 to 80 kW, not requiring up to 100 kW. In this article, road load is indicated in WLTC mode. 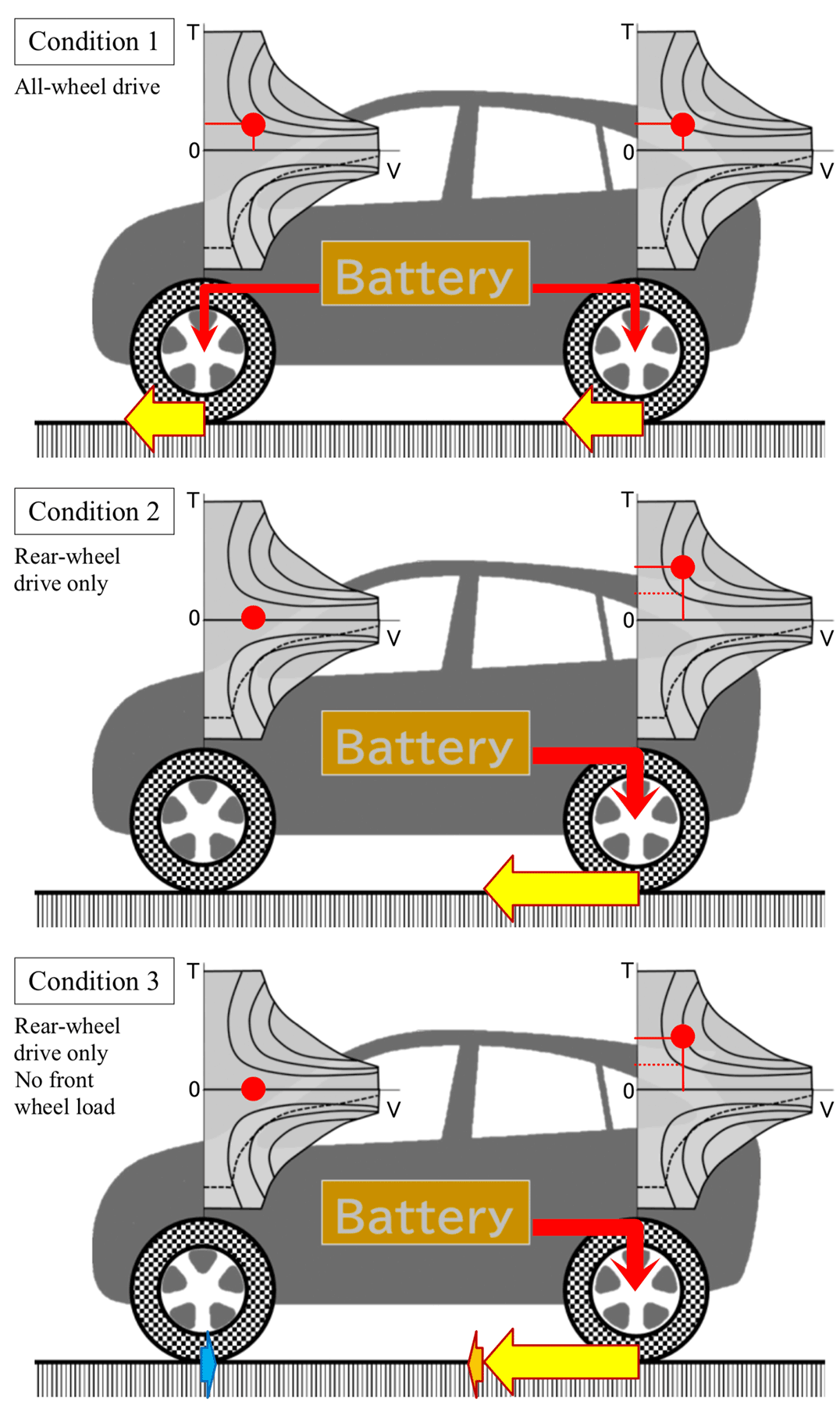 If the same specifications are used for the front and rear motors, the output of each axis is half of the total output. For this reason, the performance charts are the same.

However, under Condition 1, each motor has a relatively low-load operation, which means that it has poor efficiency. A better way to drive is to use only one of the front or rear wheels and increase the load on the drive wheels to achieve a more efficient operating point.

For example, if the rear wheels are the main drive wheels and the front wheels have no load, the operating point will be as shown in the left figure. As a result, electricity costs generally increase.

Considering these operating conditions in more detail, at the front wheels, which are regarded as "no load," the drag loss of the motor system occurs, so the actual driving state is that the rear wheels additionally bear the drag load of the front wheels. The characteristics of this drag loss (front wheels in this example) differ greatly depending on the motor type. If only this is taken into consideration, it is better not to use AWD when considering only electricity consumption, but since high output is given as a precondition, two-wheel-drive specification is excluded from consideration this time. 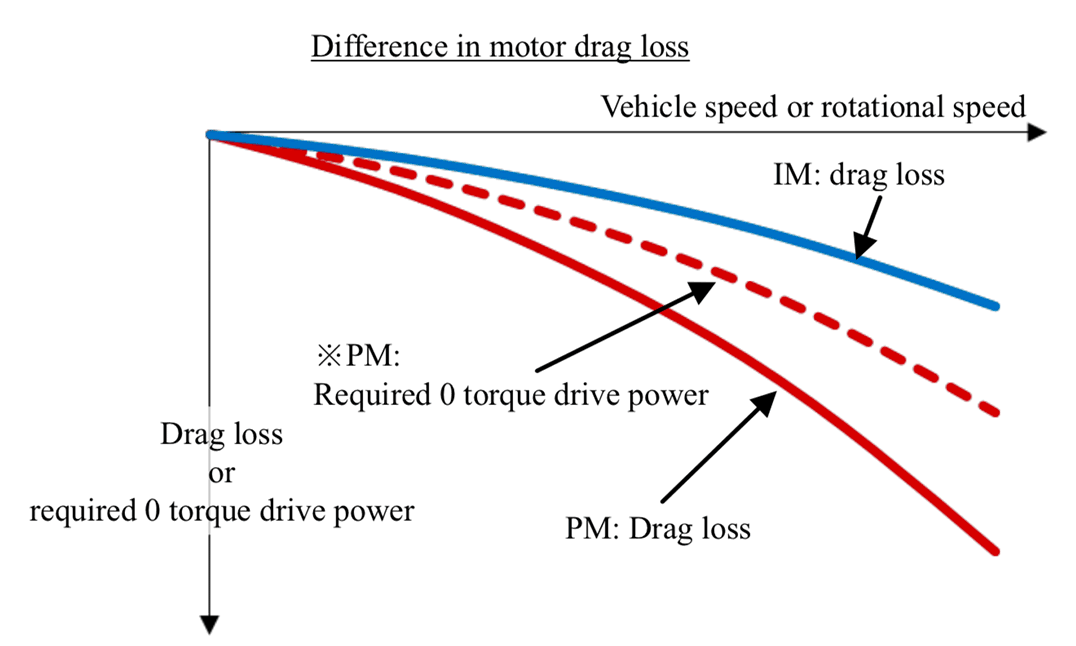 Let's reconsider the drag loss of the motor. The drag loss is the amount of work required to rotate the shaft when the input power to the motor is set to 0 (power elements are all open).

In terms of performance, this is where the difference between PM and IM characteristics appears most. The only exception is drive efficiency. Since IM has no magnet, the drag loss is only mechanical friction and oil stirring resistance. In the case of PM, there is a magnetic field which rotates, generating iron loss due to magnetic flux fluctuations. As a result, there is a difference in drag loss between the two motors as shown in the figure on the right.

Therefore, if the motor heavily drags with no load, it is more suitable for IM. As an example, the E-FOUR-equipped Lexus RX450h hybrid car, which uses RWD frequently, is fitted with PM in the rear. However, the AWD Prius, which uses the rear motor only at low speed, is equipped with IM in the rear. However, in PMs, there is a method to make iron loss smaller than the drag loss by supplying a small amount of power so that the drive torque becomes zero.

This is because iron loss can be reduced by weakening the magnetic field, so even if current loss is included, it will be smaller than drag loss. However, even with this, it is difficult in principle to make it smaller than the loss of an IM. 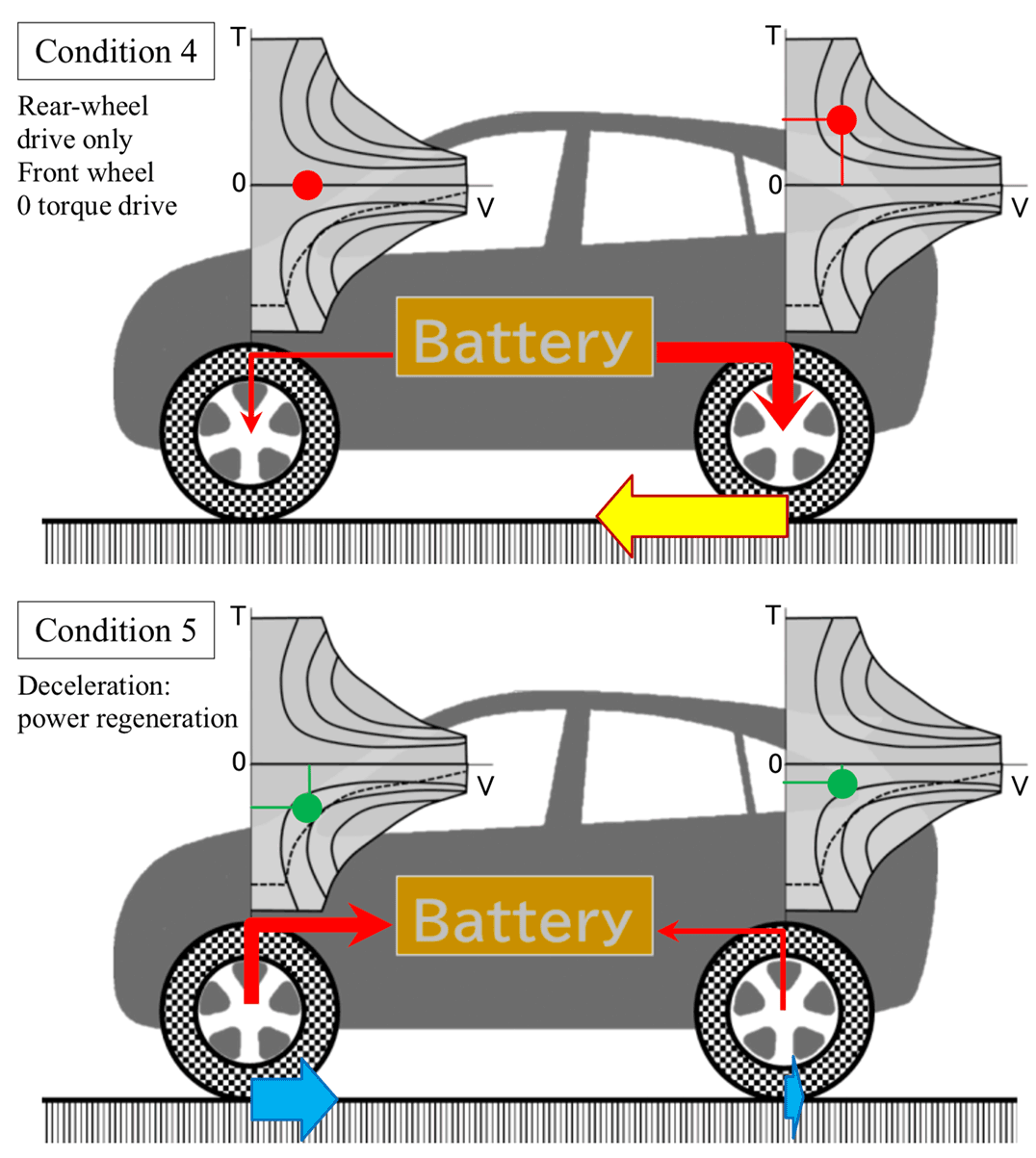 If the performance of the rear-wheel motor (here the main drive motor) is the same, power consumption is good of the driving motor (acceleration) which means that Condition 3 (front driven IM) is more favorable than Condition 4 (front driven PM).

Most regenerative energy can be absorbed in the WLTC mode as long as it can regenerate up to 50kW. In addition, during such a deceleration (G), it is possible to apply braking (regeneration) almost only to the front wheels. 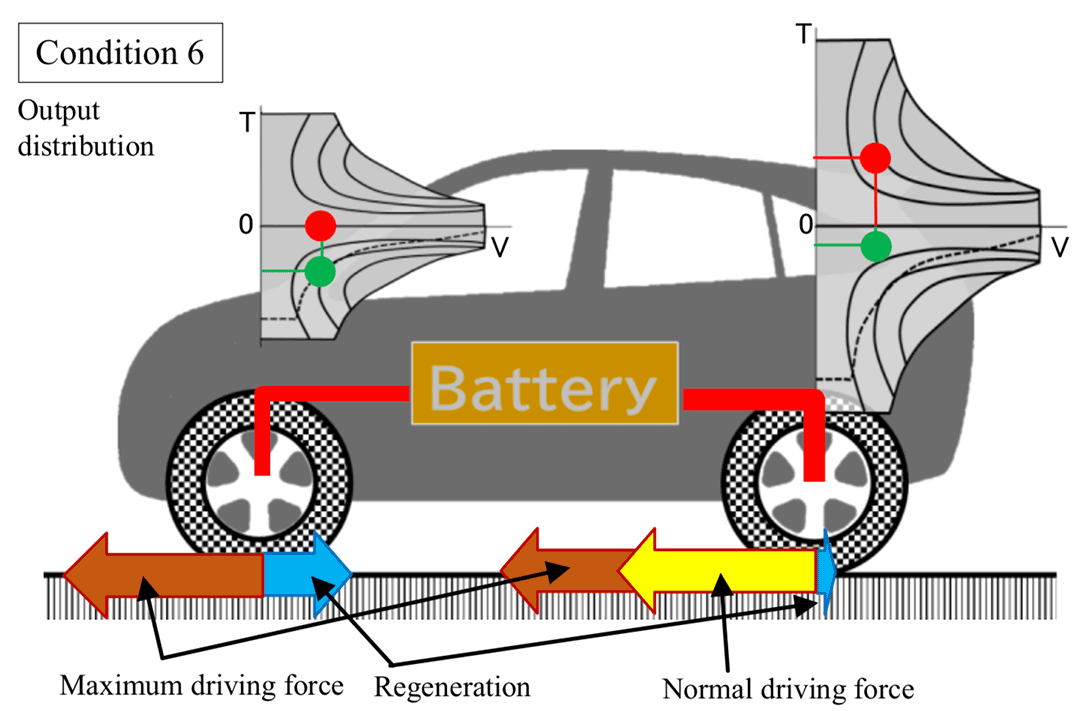 From the above considerations, if the main drive motor with a normal load is in the rear, and if the maximum output of the rear wheels is set large with an emphasis on driving performance of the rear wheel drive, the front motor can be small. However, as can be seen from the comparison between Condition 2 and Condition 6, the efficiency of the RWD will decrease. Therefore, having the same output in the front and the rear may be a reasonable option.

For the rear motor, PM is better if no-load is small during deceleration. Meanwhile, IM is better for front motor in terms of drag loss, but IM requires a preparatory operation for regeneration. From the viewpoint of regenerative efficiency, PM is more desirable. 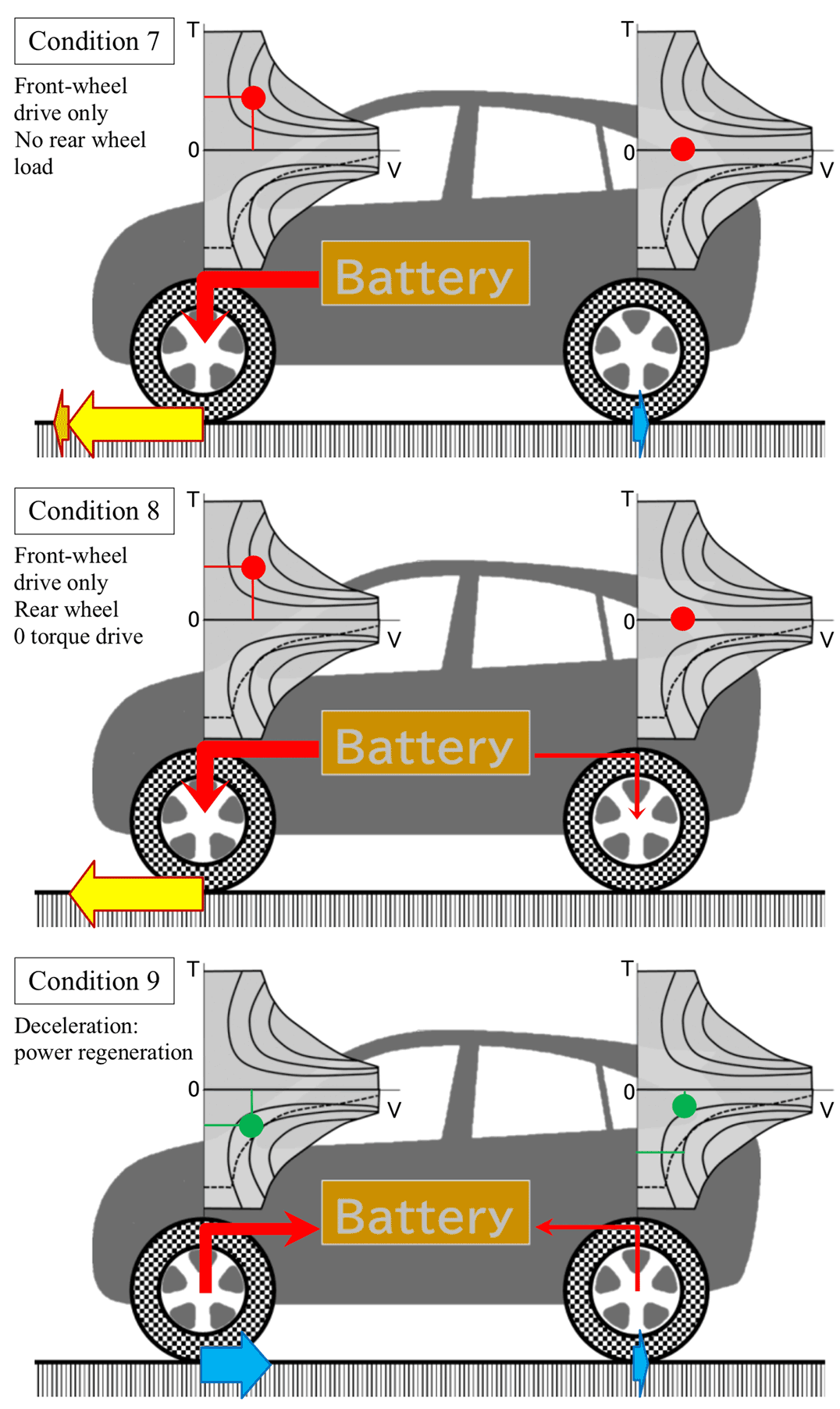