CJP aims to reduce the workload on drivers by utilizing Toyota's CASE technology, including increasing carbon neutrality by electrifying vehicles, and improving the efficiency of logistics in general through connecting technology.

Participation of Suzuki and Daihatsu

・In July 2021, Suzuki Motor and Daihatsu Motor announced that they would participate in CJP. - Suzuki and Daihatsu, which have strengths in light commercial vehicles, will join the collaboration to solve problems in regional logistics regarding narrow roads and last-mile logistics in residential and other areas. - By adding Isuzu and Hino's strengths in intercity and intracity logistics, the partnership aims to improve the efficiency of logistics as a whole. - The overall plan is to promote the electrification of light commercial vehicles through the participation of the two companies in CJP. - Suzuki and Daihatsu will take a stake in CJPT. Toyota will have a 60% stake in CJPT, and Isuzu, Hino, Suzuki, and Daihatsu will each have a 10% stake. Originally Toyota owned 80% of the joint venture but transferred a 10% stake each to Suzuki and Daihatsu.

・CJP is intended to promote joint development of BEVs, FCEVs, autonomous driving technology and electronic platform (E/E architecture) mainly in the light truck area, and reduce development costs through collaboration. - The four automakers will participate in demonstration experiments to realize a “hydrogen society” in Fukushima Prefecture, promoting FCEVs and related infrastructure. ・CJP is also intended to promote electrification in the light commercial vehicle field. - CJP plans to carry out research and development of low-priced and good-quality light electric vehicles. ・Through connected technology, CJP will work to improve the efficiency of logistics as a whole by connecting intercity logistics (heavy trucks) to last-mile logistics (light trucks). ・CJP plans to introduce advanced safety technology covering both large commercial vehicles and light commercial vehicles. - Through the alliance, members are also considering the development of higher-performance ADAS and the development of connected infrastructure-linked systems in the future. (Created using Toyota Motor’s PR materials and CJP’s press conference materials)

・Toward the realization of carbon neutrality in Japan, the necessity for electrification of commercial vehicles is increasing, and the needs for electrification from users are also on the rise. For this reason, CJP is promoting the practical application of electric commercial vehicles. - CJP plans to jointly develop electric vehicles in the light truck field with the aim of reducing costs in order to increase the use of BEVs and FCEVs. - In addition to reducing vehicle costs, CJP will develop easy-to-use vehicles that will lead to higher operational efficiency. In addition, the partnership aims to popularize electric vehicles in the logistics industry in collaboration with society and users. 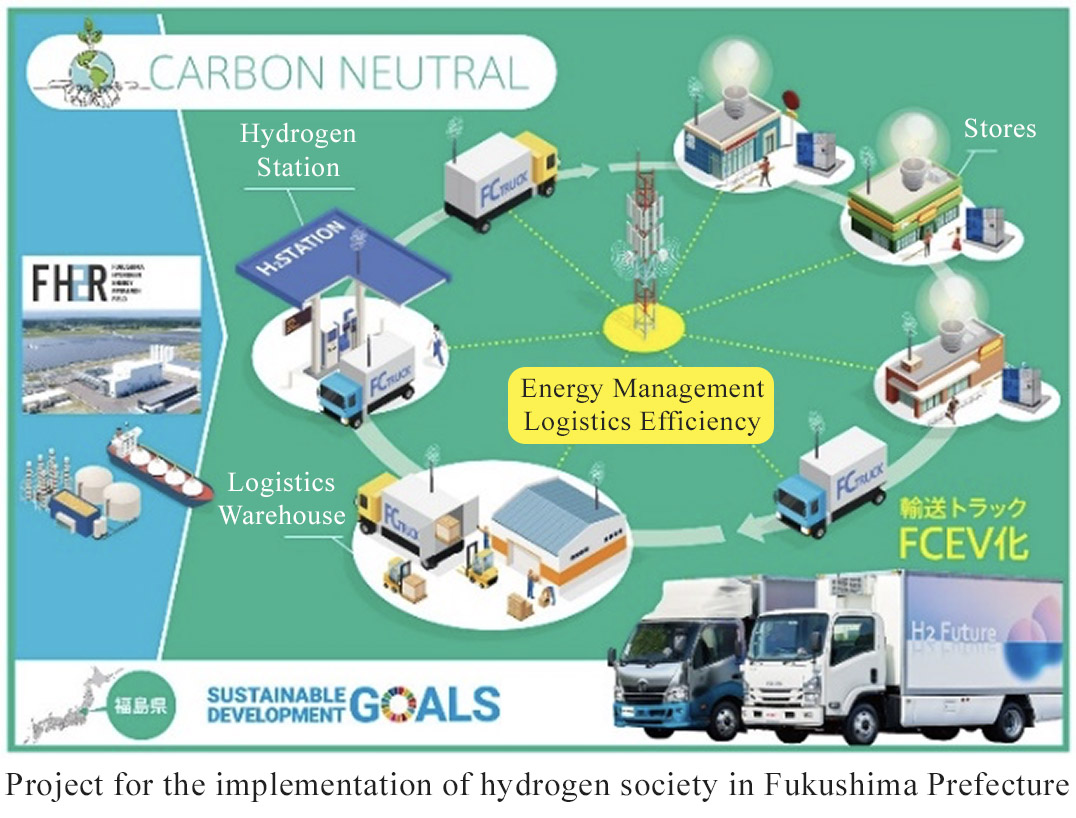 ・In June 2021, as part of CJP's activities toward electrification of commercial vehicles, it announced that it would participate in a demonstration experiment for town development utilizing hydrogen, which is being promoted by Fukushima Prefecture. - FCEV light trucks of Hino and Isuzu will be used for delivery within the region. In addition to delivery to supermarkets and convenience stores, FCEVs will be used as mobile doctor’s offices and diners to solve local issues with an eye on revitalizing the region. - Hydrogen from renewable energy produced in the Fukushima Hydrogen Energy Research Field (FH2R) in Namie Town, Fukushima Prefecture, will be used for FCEV trucks to reduce CO2 emissions in the supply chain. - In addition to zero emissions using FCEV trucks, CJP will also work to improve the efficiency of logistics using connected technology. The partnership will also try to improve FCEV truck operation management, hydrogen filling timing optimization and energy management tailored to local conditions. - In addition to Toyota, Hino, and Isuzu, Denso, convenience stores, supermarkets and beverage manufacturers will participate in this initiative for the social implementation of hydrogen energy in Fukushima Prefecture. - Through this demonstration experiment, Fukushima Prefecture will build an implementation model of a hydrogen-based society, including infrastructure, and aim to expand it to cities of the same size throughout Japan in the future.
Please log in or subscribe to AAA weekly to view the rest of this report.
Free trial subscriptions are available!