MHIET Develops Turbochargers Suitable for the Age of Electrification

FOURIN has interviewed an engineering manager and a sales manager of Mitsubishi Heavy Industries Engine & Turbocharger Co., Ltd. (MHIET), which is one of the four major turbocharger manufacturers around the world, about the current status of the turbocharger market and future development prospects.

According to MHIET, the history of turbochargers can be broadly divided into four generations in relation to engine development trends. The first generation of turbochargers had large capacity followed by the second generation which was small size with high response. The current third-generation turbochargers are expected to have further improved boost pressure and supercharging efficiency. Variable-geometry turbochargers (VGTs) for diesel engines have increased in the second generation and competition for the development of VGTs for gasoline engines is currently intensifying. MHIET has already developed a VGT for gasoline engines that can handle exhaust gas temperatures of 950 °C and is working on the development of a new model with a temperature tolerance exceeding 1,000 °C.

In the electrification era, there are development requirements which are different from those of conventional turbochargers. For example, when an engine is used exclusively for power generation, such as a range extender BEV or a series hybrid, a turbocharger is needed that narrows the operating region and improves power generation efficiency. Narrowing the operating range enables switching back from variable vanes to fixed vanes, eliminating the need for VGTs or two-stage turbochargers. There is no need to consider the transient response and the turbo lag, and as a result of pursuing only the supercharging efficiency, the turbocharger for a power-generation engine may be enlarged.

In addition, MHIET is also developing gas turbines for range extender BEVs and electric compressors for FCEVs by combining the technical capabilities of internal combustion engines and rotating machinery, providing various solutions in the age of electrification.

MHIET: Developing Turbos Suitable for the Electrification Era and Supplying Them to Global Automakers

Mitsubishi Heavy Industries Engine & Turbocharger (MHIET), a group member of Mitsubishi Heavy Industries (MHI), is building a development and production network that responds to automakers’ global strategies and supplying turbochargers worldwide. Turbochargers designed and developed at MHIET’s Sagamihara Plant in Japan are supplied to passenger vehicles, commercial vehicles and other industries. Overseas automakers account for 93 percent of all sales, Japanese automakers for five percent and other industries for two percent. Most overseas clients are Chinese, European and American. Sales volume in 2018 reached about 10 million units worldwide. Except for some Japanese automakers, most manufacturers use MHIET’s turbocharges on some of their models.

MHIET’s global share is estimated to be about 25 percent. None of the competitors seem to possess actual figures, but at least for China, MHIET had the top market share in 2018 in the passenger vehicle segment.

How many large deals a company can win is a game and one’s share will greatly fluctuate depending on the number deals acquired. The scale of projects has been enormous due to stricter environmental regulations and this tendency has been increasing.

Turbocharger installation trends in Europe, US and China

In the United States, small automobiles have been touted for some time, and the use of turbochargers has increased rapidly in response to engine downsizing. Nowadays, fuel efficiency itself is not emphasized due to the drop in oil prices and the unwavering popularity of pickups and SUVs, but turbocharger use is still increasing.

Turbocharger use is traditionally high in Europe, allowing only modest market growth. In Europe in particular, efforts are being made to improve fuel efficiency by using turbochargers in combination with the Miller cycle, EGR and 48V mild hybrid technology.

The use of VGTs (variable-geometry turbochargers) in gasoline engines is increasing. As is well known, gasoline engines have higher exhaust gas temperatures than diesel engines. The former is generally between 700-850 °C and the latter between 880-1,050 °C.

MHIET has reviewed the mechanism design and developed a new-generation VGT that can withstand exhaust gas temperatures of about 950 °C. However, the market as a whole is aiming for 1,020 °C so MHIET will keep continue development following this trend. For example, MHIET believes that it is possible to optimize the shape and mechanism based on the analysis and evaluation technologies cultivated in the development of diesel VGTs without using special materials such as titanium.

The turbine wheel’s diameter must be reduced as much as possible while exhaust gas flow rate must be increased to the max. As the turbine wheel’s diameter decreases inertia decreases accordingly, improving transient response. As a result, the turbo lag declines. There are several ways to increase the flow rate. One is to increase the rotation speed of the wheel. However, in order to increase the rotation speed, it is necessary to ensure strength enough to withstand the increase in centrifugal force due to high rotation. There is also a lot of room for improvement such as the shape of the impeller and its scrolls.

Titanium-aluminum-alloy turbine wheels are used in some models such as high-performance sports cars, but these are intended for users who want 0-100km/h acceleration reduced as much as possible. However, this is not the necessary solution in the immediate future for mass-produced vehicles or general luxury vehicles in the premium segment.

The material of the turbine wheel is basically high-nickel heat-resistant steel. There are only a limited number of suppliers worldwide capable of processing high-quality turbine wheels. MHIET designs the impeller shape in-house and outsources the production to its suppliers.

What is a variable-geometry turbocharger?

・This is a turbocharger equipped with a mechanism that can variably control the nozzle area upstream of the turbine wheel. ・The supercharging characteristics can be optimized by changing the flow rate of the exhaust gas according to the engine speed, improving supercharging efficiency. 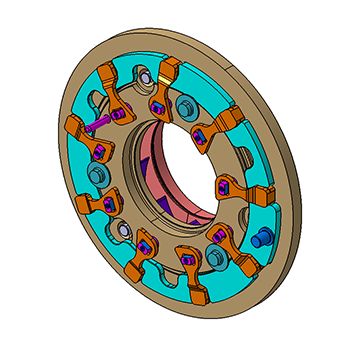