French automaker PSA is facing an ever increasing problem in China. According to the China Association of Automobile Manufacturers, the factory shipment volume of Dongfeng Peugeot Citroën (DPCA), which handles PSA’s Peugeot and Citroën brands, was 114,000 units in 2019, down 55.2% from the previous year. As for Changan PSA, which markets the DS brand in China, factory shipments decreased 46.9% from the previous year to 2,055 units. As a result, the company was forced to withdraw from the Chinese market in November 2019. Coupled with production suspension due to the outbreak of the new coronavirus, PSA is literally fighting for survival in China. PSA’S factory shipments in China peaked at about 730,000 units in 2015 but have been continuing to decline ever since. In the first five months of 2020, factory shipments dropped 66.2%. Due to lack of product promotion and product planning failures, PSA’s products have been abandoned by Chinese consumers in the past five years.

In September 2019, DPCA announced a reconstruction plan spanning until 2025 to overcome the current dire situation. Positioning 2020-2021 as the “period to strengthen business,” DPCA will strive to recover by urgently creating a sales method that combines internal combustion engine vehicles and electric vehicles, and a system to prepare for the introduction of new emission regulations. 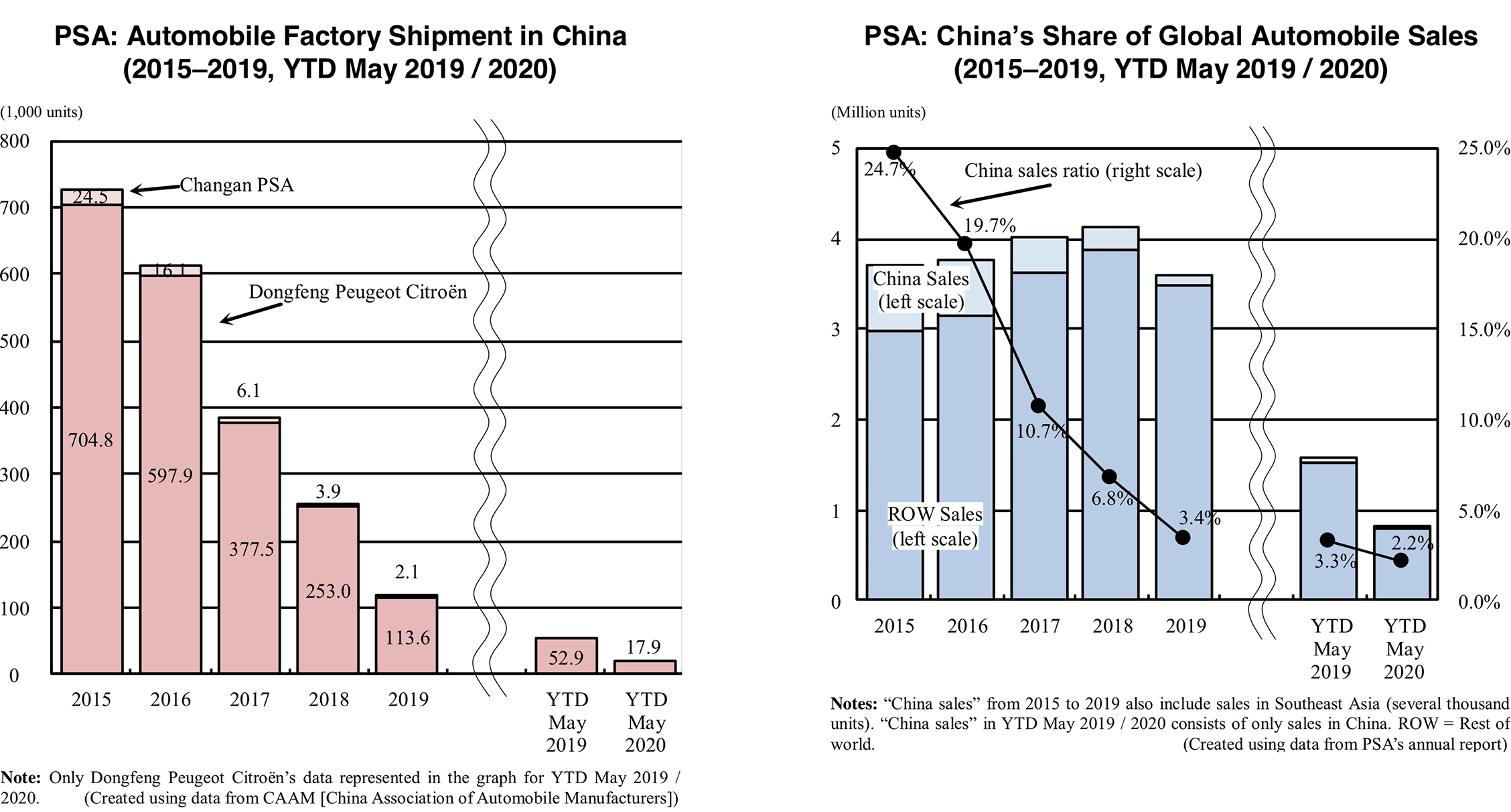 In May 2020, the gasoline-powered 2008 and the electric e2008 were launched. This was the company’s first attempt to release a gasoline and an electric version of the same model simultaneously. In the following month, the C5 Aircross entered the market. Dongfeng Peugeot has also launched a nationwide sales promotion campaign. From May 2020, the company began to offer trade-in up to 20,000 CNY to customers who want to replace their vehicle with the Citroën C5 Aircross. In addition, the Peugeot brand and the Citroën brand had separate stores until now, but in areas where the company has no sales presence, it will open stores that will handle both brands.

While the China – Southeast Asia market accounted for 24.7% of PSA’s global sales in 2015, its share shrank to 3.4% by 2019. In the first five months of 2020, China accounted a mere 2.2% of PSA’s global sales. If the current reconstruction policies fail, it is possible that PSA will reconsider whether it is still worth remaining in the Chinese market.