The Issue of “Forced” Technology Transfer in China

In the ever-increasing US-China trade dispute, technology transfer and infringement of intellectual property rights are serious issues. US President Donald Trump has been working to resolve trade imbalances between China and the United States, and has instructed the United States Trade Representative to investigate China for unfair trade practices. In March 2018, President Trump announced that he will be imposing sanctions on China for such practices. Subsequently, the EU and Japan have also pointed out China’s intellectual property infringement acts as a problem and called for improvement. In response to the US, Japanese and European complaints, China has said that “US and Chinese companies are collaborating voluntarily” and “The issue of forced technology transfer has been raised in order for the United States to gain an advantageous position in trade negotiations.” However, in March 2019, China enacted the “Foreign Investment Law,” and amended “Regulations on the Administration of Import and Export of Technologies” and “Sino-foreign Equity Joint Ventures Law.” The new law and the amendments clarified the ban on forcing technology transfer, removed the clause on fair treatment of domestic and foreign companies, and reduced the discriminatory treatment of foreign companies.

In the “Regulations on the Administration of Import and Export of Technologies,” which summarizes the rules for technology introduction from foreign countries, the following items were deleted: Article 24 (3) “Where the receiving party to a technology import contract infringes another person's lawful rights and interests by using the technology supplied by the supplying party, the supplying party shall bear the liability therefore.” and Article 27 “Within the term of validity of a contract for technology import, an achievement made in improving the technology concerned belongs to the party making the improvement.” These provisions have been pointed out by the United States, Japan and the European Union as discriminatory. With regard to the contents of these items, problems can be reduced by making specific agreements in accordance with China’s Contract Law in the future.

In the “Implementing Regulations on Sino-foreign Equity Joint Ventures,” Article 43 (4) which stipulates that “The technology importer (joint venture) can continue to use the technology even after the expiration of the technology transfer agreement.” was deleted. In the future, it will be necessary for both parties of the Sino-foreign joint venture to execute and confirm this item based on the relevant provisions of the Contract Law.

These amendments have improved the treatment of foreign companies in China. However, there remains the possibility of information leaks due to the outflow of human resources and technology transfer in the course of business-to-business transactions. According to a survey by the US-China Business Council, 19% of member companies said they were asked to transfer technology to Chinese operations, 67% of the requests were from Chinese partners, 33% from the central government and 25% were requests from local governments. It cannot be ruled out that technology transfer is taking place even now within joint ventures in the Chinese automotive industry, which is subject to restrictions on foreign investment.

A prominent example of technology transfer from foreign companies to China is the own-brand business of joint ventures. In March 2009, the State Council announced the Automobile Industry Coordination and Promotion Plan, which encourages the development of own-brand business through in-house development, joint development with foreign capital, as well as corporate acquisitions and mergers. In the own-brand business, local staff is taking the lead and the own-brand is treated as a Chinese brand. Many of these own brands failed over the years. Mostly electric models are sold under these brands; however, many of these products are rebadged outdated foreign models sold at a low price. Other own brands have never made it to mass production or yielded poor sales results. These results may be an indication that foreign-affiliated manufacturers do not want to provide technical resources to own-brand models of their local joint ventures.

The market for new energy vehicles, mainly BEVs, has matured to some extent, and Chinese automakers are focusing on the development of hydrogen fuel cells and are working to strengthen their own technological capabilities while also strengthening alliances with overseas companies. Foreign-affiliated companies must pay attention to the protection of their technology while observing the future development of intellectual property laws and establish good relationships with Chinese joint venture partners. 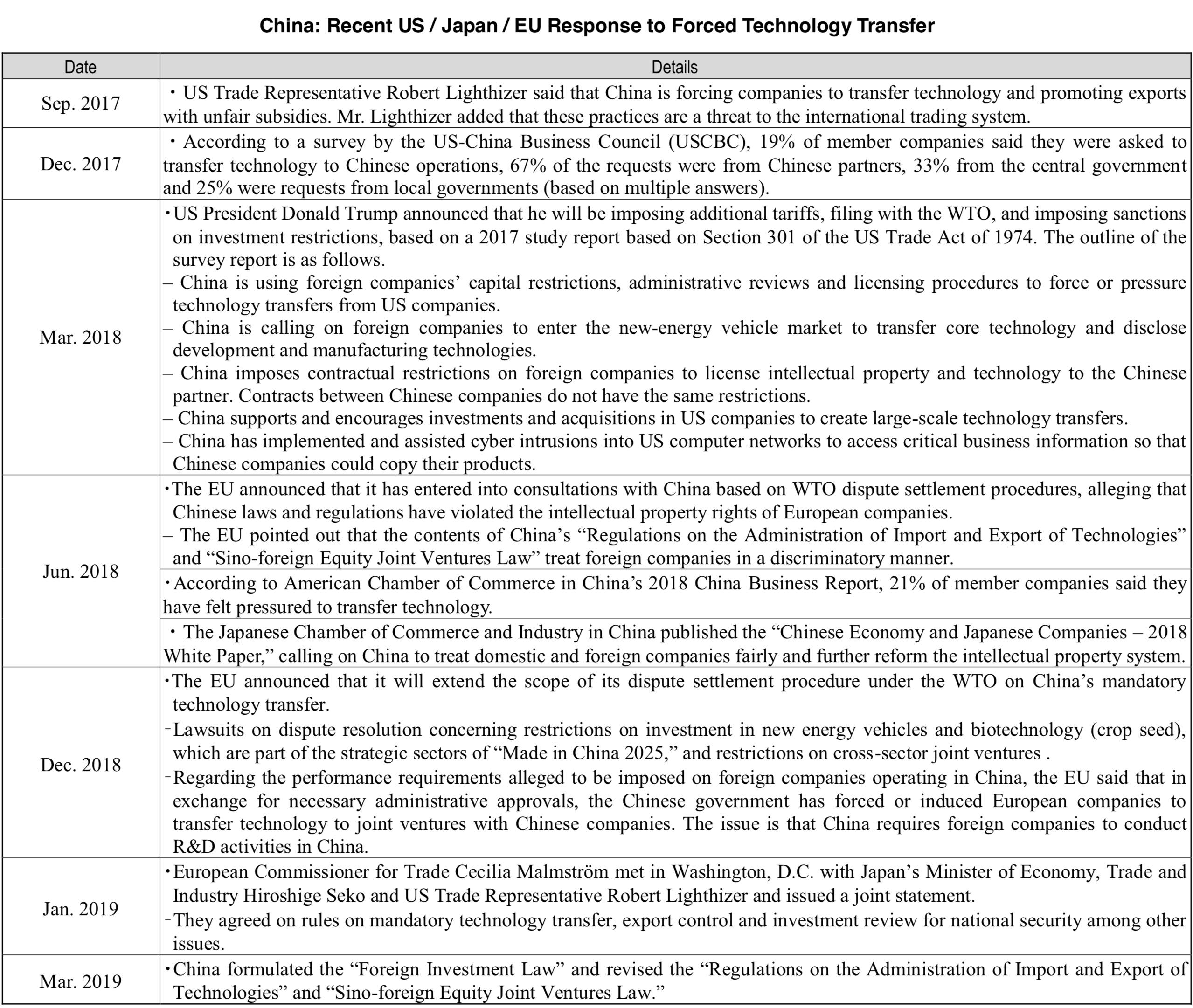