Automobile sales in Japan (including imported vehicles) declined 1.5% year-on-year to 5.19 million units in 2019. The effect of the consumption tax hike in October of the same year was minimized by the revision of automobile-related taxes. Passenger vehicles dropped 1.6% to 4.42 million units while commercial vehicles fell 1.0% to 768,000 units. Looking at passenger vehicles by segment, luxury, small and mini vehicles increased while high-end, large, midsize, mass-market and 1,000cc vehicles decreased. As for commercial vehicles, heavy, medium and light trucks as well as vans went up while mini vehicles and buses declined.

By vehicle type, sedans, station wagons and hatchbacks have continued their long-term downtrend, going down 7.5% to 1.38 million units from the previous year and dropping some 25% compared to 2014. The sales of high-end and low-end sporty vehicles increased; however, overall sales declined 2.1% to 47,000 units. Meanwhile, SUVs and MPVs continued to perform well. SUVs set a new record high for the third consecutive year against a backdrop of continuous product expansion, going up 5.2% 720,000 units. In addition to expanding sales of new models such as the Daihatsu Tanto and Nissan Dayz, existing products also increased sales such as the four sister models the Toyota Roomy, Toyota Tank, Daihatsu Thor and Subaru Justy, overall sales inching up 0.3% to 2.19 million units.

SUVs and MPVs are expected to remain at high levels in 2020, with SUVs are forecast to continue growing driven by new models. Despite the long-term contraction trend of sedans, sales of Toyota’s new Yaris (successor to Vitz) and Honda’s new Fit is expected expand. In order to keep the sales of sedan-type vehicles from shrinking, the introduction of new models will be indispensable. In addition, the key to reviving sporty-type vehicle sales is the continuous introduction of new models.

Sales of sedans, stations wagons and hatchbacks declined for the third consecutive year, going down 7.5% to 1.38 million units. Although sales of some new models increased, existing models significantly declined which resulted in continued shrinking of sales.

Looking at sales trends of sedans by segment, sales of all classes decreased except for small vehicles. In the ultra-luxury segment, the Lexus LS, which is the highest-selling model in Japan, decreased 71.1% to 3,145 units, while the second highest-selling model the Mercedes-Benz S Class fell by 36.1% to 2,330 units. Poor sales of these two models drove down overall sales, going down 48.6% to 9,752 units. In the luxury segment, all but the Audi A6, which had been fully upgraded, decreased, overall sales falling 31.5% to 16,000 units. In the high-end / large segment, the Lexus ES, launched in October 2018, and the fully-redesigned BMW 3 Series, released in 2019, increased sales in addition to the Mercedes-Benz C-Class. The segment’s best-selling model the Toyota Crown sharply declined, going down 28.2%, after strong sales in the previous year. The overall segment dropped 4.1% to 86,000 units. In the midsize segment, the Volvo V60, Peugeot 508, Citroën C5, Mercedes-Benz A Class, Honda Insight, Nissan Skyline and other new models expanded sales thanks to new-vehicle effect and product improvement; however, they were unable to cover the decrease of other models, resulting in a 10.0% decline to 143,000 units. In the mass-market segment, the partially-redesigned Honda Shuttle and the fully-redesigned Mazda3 (renamed from Axela) expanded sales thanks to new-vehicle effect; however, the overall segment fell 6.4% to 127,000 units due to poor sales of other models. 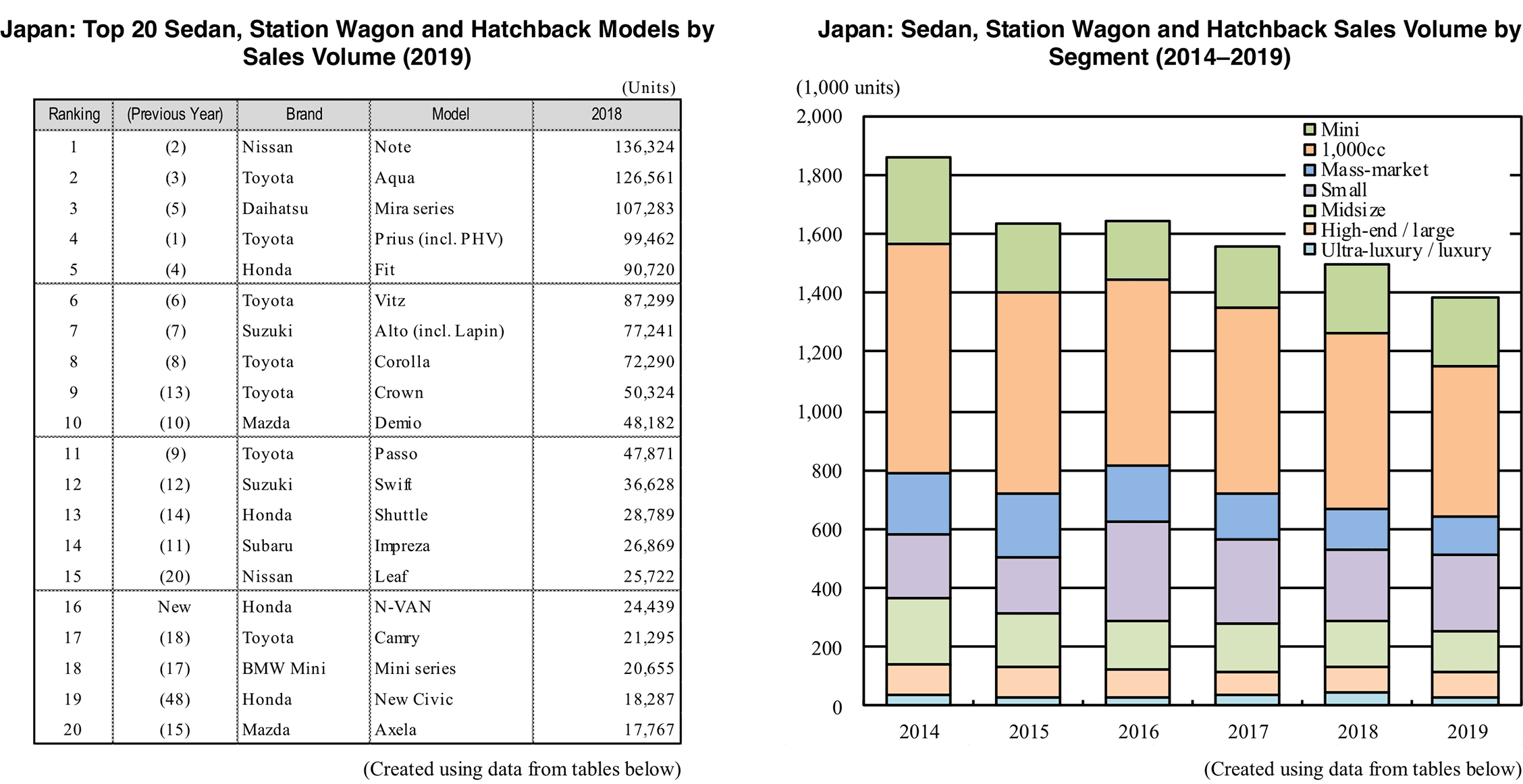 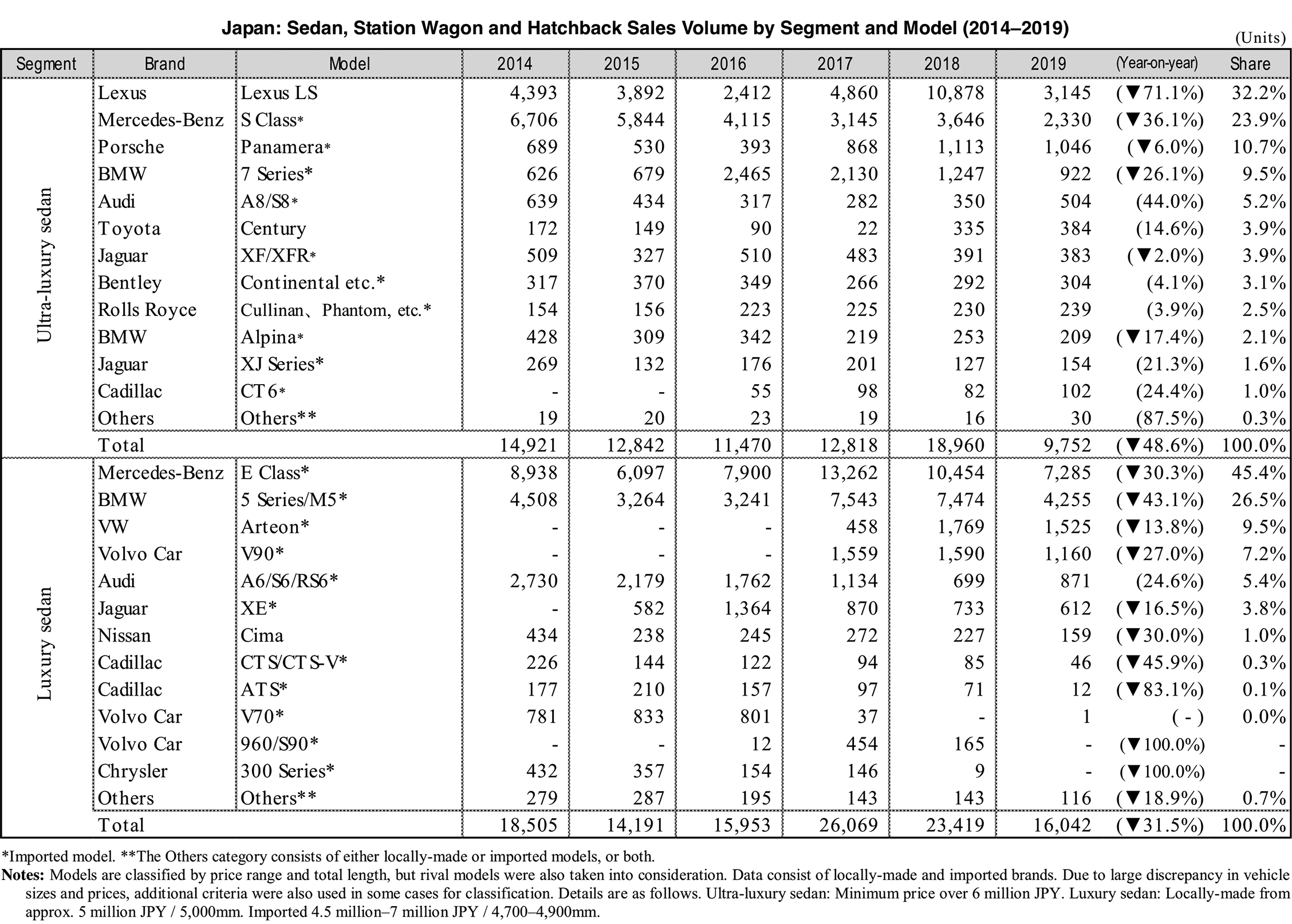 In the 1,000cc segment, core models such as the Nissan Note, Toyota Aqua, Toyota Vitz and Honda Fit declined across the board due to reaching the end of their product cycle, resulting in an overall decrease of 14.5% to 512,000 units. In the mini segment, the first full-year sales of the Honda N-Van resulted in an 85.1% increase in sales; however, strong decline of other models pushed down sales 0.7% to 228,000 units. Nevertheless, the mini segment performed well compared to other segments. 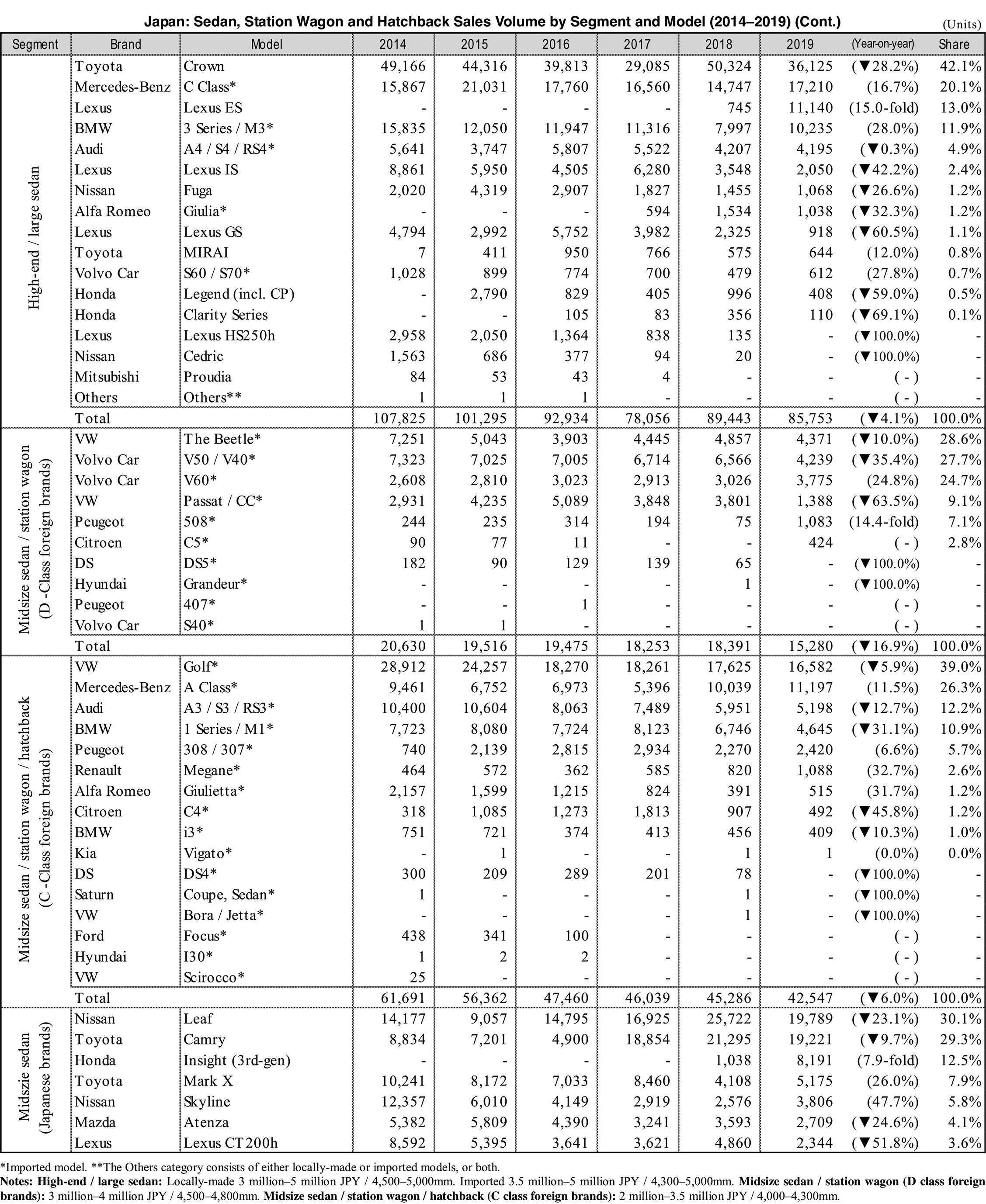 The only segment that increased in the sedan / station wagon / hatchback category was the small segment, going up 8.5% to 261,000 units. The major drivers of the increase were the Toyota Prius and Corolla Sport. Launched in December 2018, the revamped Prius underwent extensive exterior redesign and was equipped with DCM onboard communication device as standard equipment, enhancing the model’s product appeal. The Corolla Sport, which shifted from the previous model (Auris) to a higher grade in June 2018, pushed up small vehicle sales with its first full-year sales in 2019.

Looking at sales by model, although the Nissan Note dropped 13.1% in 2019, it maintained its top position. On the other hand, the Toyota Aqua, which ranked second in 2018, was overtaken by the Toyota Prius and the Corolla Series, dropping to fourth place. The Daihatsu Mira series, which was third in 2018, was surpassed by the Prius and Corolla series, falling to fifth position. In 2020, the fully-redesigned Toyota Yaris (successor of the Vitz) and the Honda Fit, ranked sixth and seventh, are forecast to ascend to a higher position.

Sales of the sporty category dropped 2.1% in 2019 to 47,000 units, going down for the fourth consecutive year. New models pushed up sales of the ultra-luxury, luxury and mini segments. On the other hand, the high-end, mid-level and small segments declined. 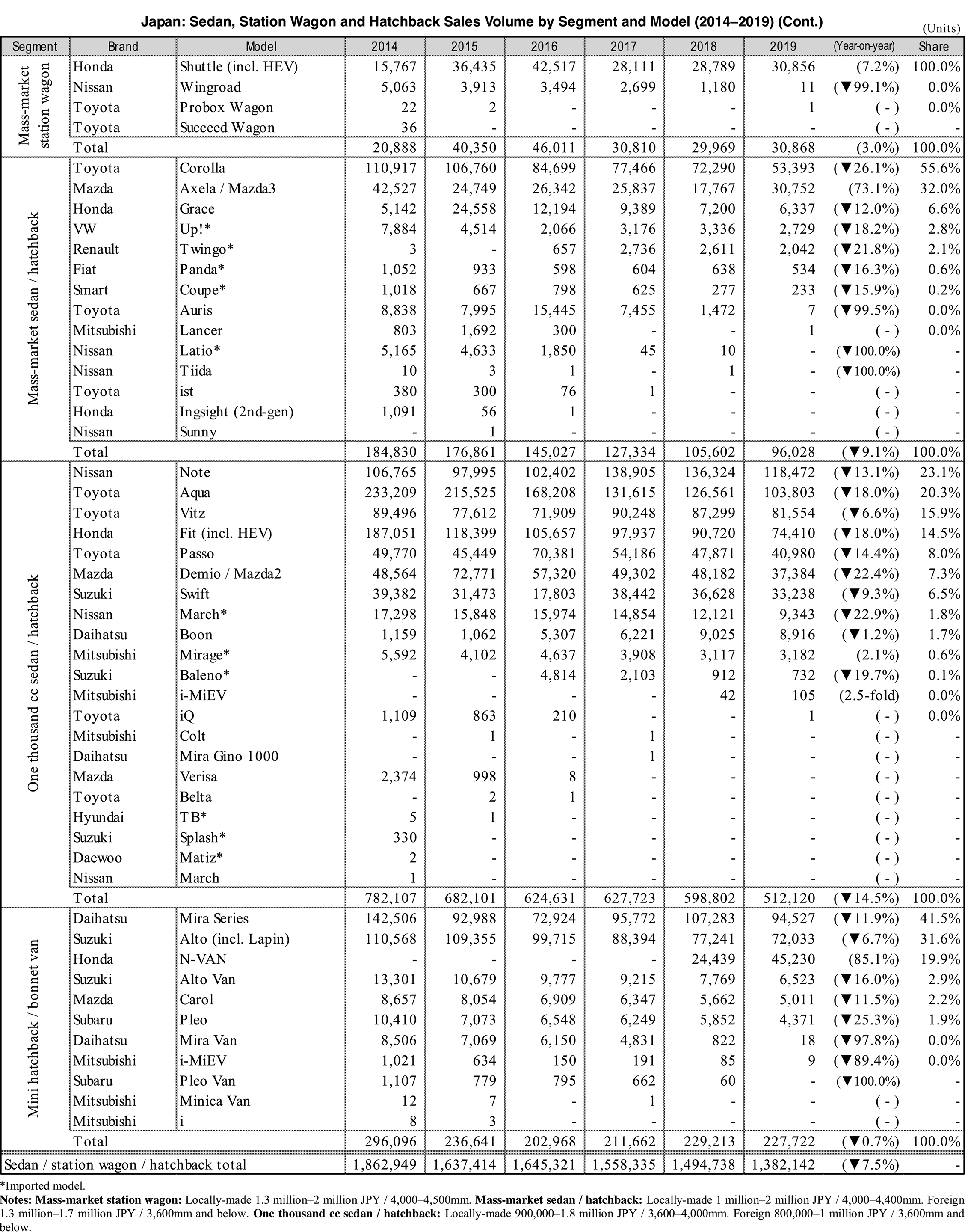 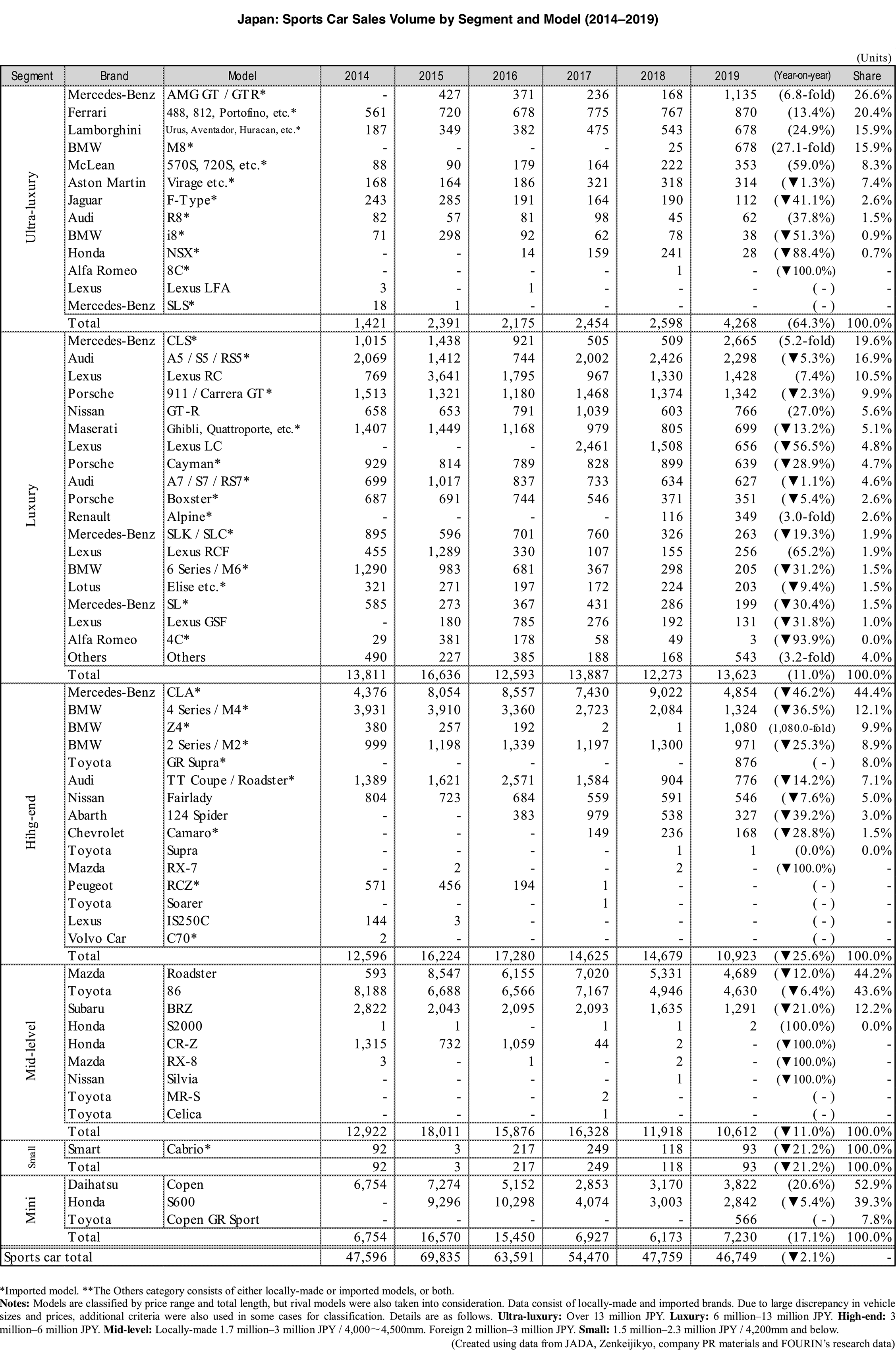 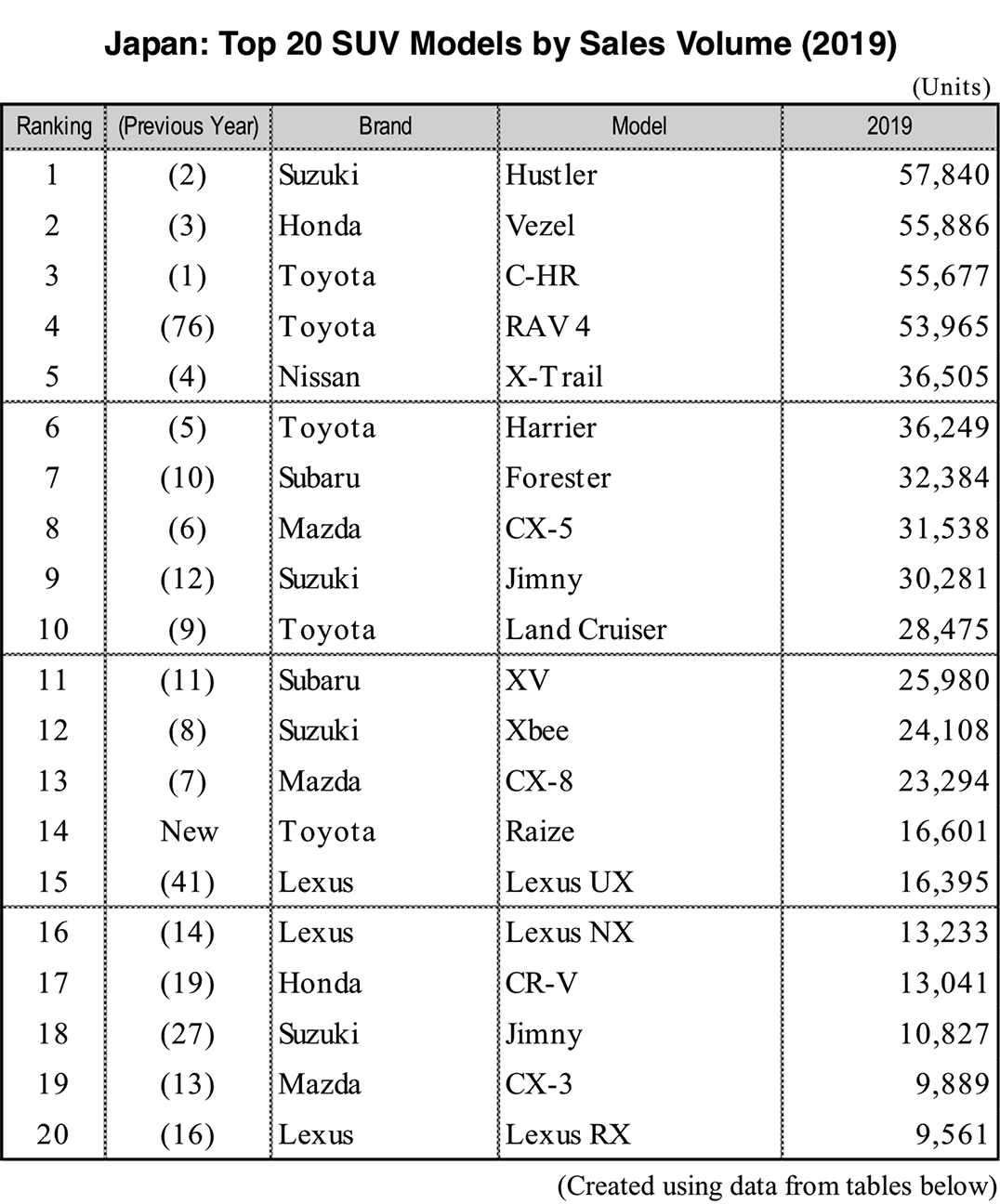 Models which sold an additional 500 or more units compared to the previous year were the Mercedes-Benz AMG GT, CLS, BMW M8, Z4, Toyota GR Supra, Copen GR Sport and Daihatsu Copen. The segments to which these models belong have generally expanded. However, the high-end segment, to which the Z4 and GR Supra belong, declined due to the sharp drop of the segment’s best-selling model the Mercedes-Benz CLA. As a result, the high-end segment posted the greatest decrease among all segments.